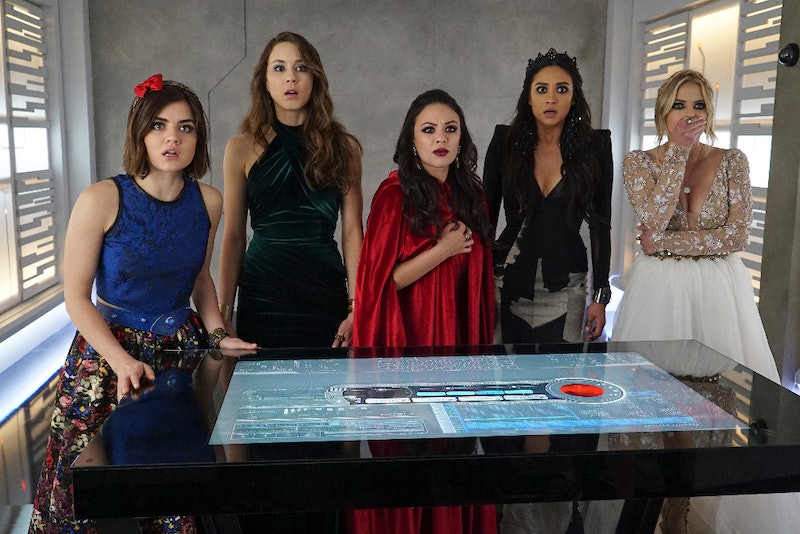 During Friday's New York Comic Con panel for Pretty Little Liars, it was announced there will be a Pretty Little Liars time jump special with its air date on Tuesday, Nov. 24. The behind-the-scenes special will look into the flash forward and discuss some of what happened in the five years between the Season 6A finale and the Season 6B premiere. Not a ton of concrete details were revealed, but it seems like there might be both a behind-the-scenes look into the time jump's creation, in addition to a peek at what happened in those five years skipped. It kind of sounds like will be similar to the previous Halloween special, wherein it wasn't a scripted episode, but the Liars answered questioned and revealed other fun details about their characters and the show.

With that said, while chatting about the time jump, Ashley Benson said, "I was actually really upset because... Can I say?" She never finished her thought, because PLL showrunner Marlene King jumped in and said fans will find out in the special. Hmm... what does that mean? Why would Benson be upset? Is there trouble in paradise for Hanna and Caleb? I can't handle any future Haleb heartbreak.

As for other flash forward details, viewers will also see Alison teaching post-time jump. Actually, she is described as "such an inspired teacher" and "the teacher you always wanted." I bet you never thought those words would ever be uttered about former Queen Bee Ali. However, she did do a lot of changing and growing since Season 1. However, let's just hope she doesn't teach her students how to tell lies and keep secrets.