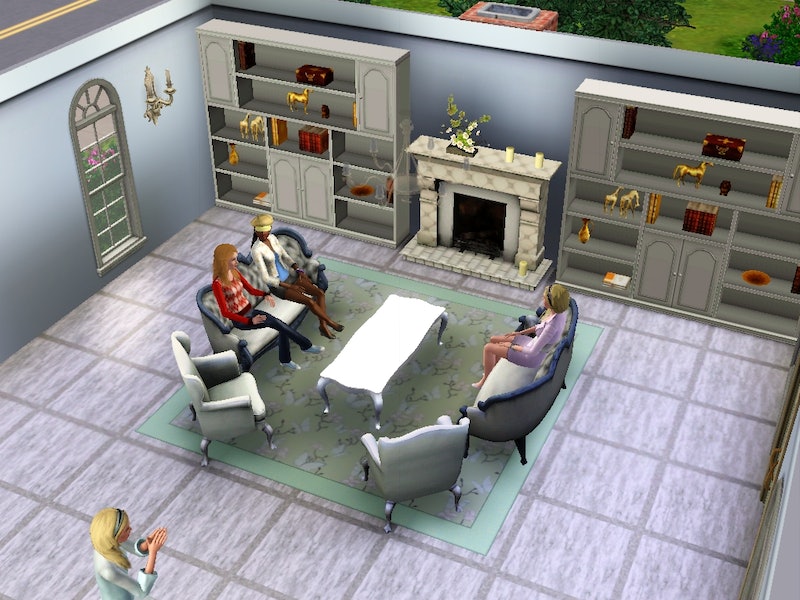 Previously on The Sims Scream Queens: Sim Kappa Kappa Tau pledges Sim Chloe, Sim Zayday, and Sim Hester moved into the sorority house; Sim Chanel was all sorts of cryptic about the third floor of the Sim Kappa Kappa Tau house; Sim Chanel #2 met the Sim Red Devil; the Sim Red Devil pried a comically large lollipop from the hands of a tiny infant. You can check out the first installment of The Sims Scream Queens here.

This week, the Sim sorority sisters grappled with the sudden disappearance of Sim Chanel #2. No one knew where she went. Sure, they read Sim Chanel #2's "THE SIM RED DEVIL JUST TOOK A LEAK ALL OVER MY BEDROOM FLOOR" tweet, but that tweet didn't provide them with any information regarding their sorority sister's current whereabouts. Worried that the Sim Red Devil might've had something to do with Chanel #2's disappearance, Sim Denise Hemphill, Sim Gigi, Sim Dean Munsch, and Sim Wes moved into the sorority house. They would attempt to protect the other Kappa Kappa Taus from whatever may or may not be lurking in the shadows of the house.

Did this put a stop to the Sim Red Devil? Of course not. As far as the Sim Red Devil is concerned, the more Sims to terrorize, the merrier. And yes, I've recapped all of the madness. Let's boogie.

In The Dead Of The Night, A Dream Made Sim Chanel Jump Out Of Bed

"Someone is breaking the number one house rule," she said. "I must stop them."

Sure Enough, Sim Chloe Had Just Walked Up To The Third Floor

The president of Sim Kappa Kappa Tau was scared she wouldn't be able to stop the curious pledge. So Sim Chanel did the only thing she could think to do: she took over Sim Chloe's body.

"If you think it's enough to stop me from exploring this spooky attic, your brain must be made out of mashed potatoes," Sim Chloe said. "I have to know what is going on up here."

"Seriously, Sim Chloe," Sim Chanel pleaded. "No one is allowed up here. Not even me. Go downstairs before I have to resort to drastic measures."

Sim Chloe could sense the soup can threat was not an empty threat. She reluctantly left the attic before she got a chance to snoop around.

"Wait, tell me more about the skull and crossbones wallpaper," Sim Pete said. "This is blowing my mind."

Sim Chanel continued to eat a plate of waffles as if a human wasn't hovering above her.

"There was a spot right here," Sim Chloe said. "It was bluish in color. Maybe someone spilled a bunch of liquid detergent?"

Sim Zayday & Sim Chloe Pointed Out Some Other Potential Clues

"Yeah, this laptop has been smoking nonstop for hours," Sim Zayday explained. "And I have no idea where this plate of rotten hot dogs came from or why it's sitting on a nightstand. Oh, and there was a tweet about the Sim Red Devil? That might be important."

"I'm a Nantucket red diamond," Sim Chad explained, "and you're a can of trash."

Meanwhile, The Sim Red Devil Went For A Jog On His Treadmill

Why yes, that is a torso on his t-shirt.

I had a good laugh.

Later, The Sim Red Devil Lurked Outside One Of The Kitchen Windows

What are you staring at, Sim Red Devil?

It Took Me A Few Moments, But I Eventually Realized What It Was That Caught His Attention

Don't get caught by Sim Chanel!

You have a point, Sim Chanel. Key lime pie rules.

Meanwhile, A Pancake Flipped Itself

Do You See It?

The Pan Of Pancake Carried On Like This For 15 Seconds

OK, Sim Kappa Kappa Tau house. You've made your point. I get it. You're spooky.

"I bet tweet about the Sim Red Devil peeing his pants was code for 'I'm on VAAAAYCAAAY,'" Sim Chanel #5 said.

"Sim Kappa Kappa Tau is going to fly to the moon on a rocket ship!" Sim Chanel #6 announced.

And Then, The Front Door Flew Open

"Not so fast," Sim Dean Munsch said. "No one in this sorority is climbing aboard a rocket. Because I am MOVING IN. And so is Sim Gigi. And so is Sim Chloe's dad. We're here to protect you from the Sim Red Devil."

Sim Gigi Surprised Everyone (Myself Included) With Some Big News

She's pregnant? Oh. OK. I reckon a congratulations is in order!

"Do you know anything about those hot dogs on the nightstand?" Sim Denise asked.

"No! I promise I don't! My grandma sent me that grill. It's a self-defense grill," Sim Zayday explained.

The Sim Red Devil Crept Down To The First Floor

Luckily for Sim Gigi, Sim Wes intercepted the Sim Red Devil before any mayhem could commence.

Then, The Sim Red Devil Vanished Without A Trace

"EVERYONE STAY IN THEIR ROOMS!" Sim Wes yelled. "I've gotta secure the perimeter."

Sim Wes was stunned, to say the least.

Sim Wes Took It Upon Himself To Check The Fireplace

"It's worth a shot," Sim Wes mumbled to himself. "For all we know, the Sim Red Devil could have his own version of the Floo Network."

Where Did The Sim Red Devil Go?

He snuck up to the third floor and fell fast asleep. Dude tuckered himself right out.

Sim Red Devil sure had himself an exciting day! What mischief will he make next? TO BE CONTINUED.