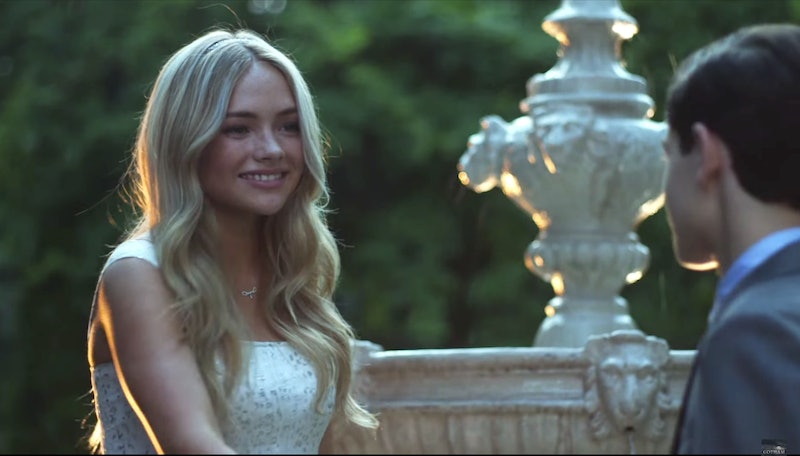 Young Bruce Wayne has not had an easy time so far on Season 2 of Gotham. He wasn't able to find out the true secret of his father's bunker, and was threatened on live television before Theo Galavan "saved" him. But new Gotham character Silver St. Cloud might make things a little better for the future Batman — and Entertainment Weekly reported that she's a possible love interest for Bruce Wayne, though that could be complicated by the fact that she is also Theo Galavan's niece. Played here by Natalie Alyn Lind, Silver is based on the DC Comics character of the same name, so she could become a major part of Season 2.

It looks like Silver represents a different direction for Gotham after playing up a potential teenage romance between Bruce and Selina last season, even though Bruce told the future Catwoman that he misses hanging out with her when they met backstage at the deadly magic show in "The Last Laugh." But that seems to be moving aside in order to introduce Silver, who in the comics was one of the few female characters Bruce Wayne ever considered settling down with.

Whether she's a part of Galavan's plans — he's clearly manipulating the Wayne family for one of his nefarious purposes — or really does just happen to be his niece, she's going to be a perfect match for the young Bruce Wayne, just like she's been a match for him in the comics.

They're Both Rich Kids

In her introduction above, Silver talks about her time spent in Geneva, and Bruce responds seriously, "We have a house there." How many other adolescents can say the same thing?

But She's Not A Snob

Even though she's just met Bruce, she's willing to give him a chance as her new school friend. Bruce has struggled in the past to fit in with anyone who isn't Alfred, so Silver's unpretentious attitude might mean that he could find someone his own age to help with his hero training and research.

Since she seems like such a free spirited character, maybe Silver could help get Bruce out of his overly serious shell.

They'll Be Attending School Together

Anything that can help Bruce act like a regular kid is probably a good thing, and he's never seemed more interested in school since he found out that Silver would be attending with him in her introduction clip.

She Also Lost Her Parents

These two even have the misfortune of being orphans in common, which is supposedly why Silver is staying with Galavan. So far, Bruce has been able to channel his grief into helping others — and, sometimes, annoying Alfred — so hopefully Silver will also be motivated to do good after losing her parents at a young age.

Even though the comic book Silver St. Cloud never dons a cape and a mask, if Gotham wants to take her in a more heroic direction, she has the perfect name for a superhero.

They have similar backgrounds, went through similar formative experiences, and even attend the same fancy private school, so it seems pretty clear that Silver St. Cloud and Bruce Wayne are destined to be together, at least for a few episodes, on Gotham.