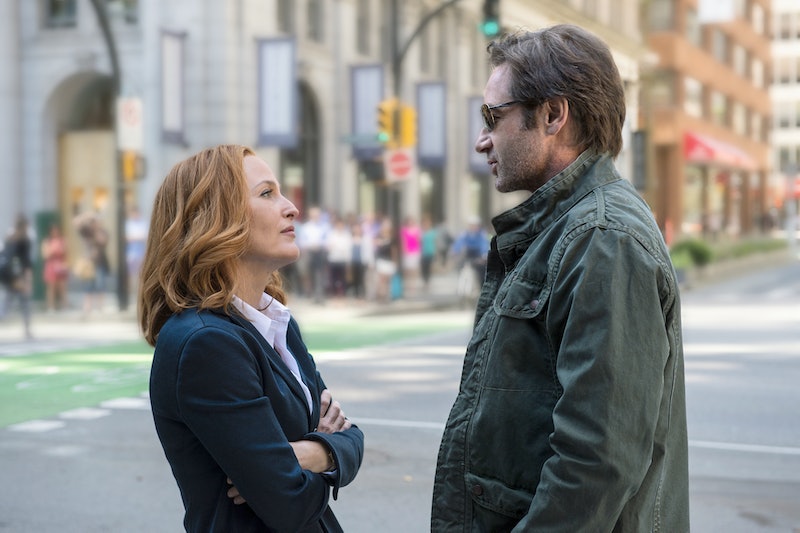 One of the most heartbreaking plotlines on The X-Files was the story of Mulder and Scully's son, William. After struggles with infertility and unsuccessful attempts to conceive, Scully miraculously became pregnant in Season 8 and gave birth in the finale. While Mulder spent the majority of Season 9 in hiding, Scully raised the child on her own but was ultimately forced to give him up for adoption when he turned out to be at least part alien — and therefore at grave risk. William was adopted by a couple in rural Wyoming, and in the 2008 film I Want To Believe, the couple acknowledged that they both feel a lasting void due to the loss of their son. But, could William be featured in The X-Files reboot?

Based on the premiere, which was screened at New York ComicCon on Oct. 10, it definitely seems possible. William may have been absent from the screen, but he constantly remains in the minds of both his parents. As Mulder and Scully attempt to help a fellow abductee, Sveta, the woman tells our favorite skeptic that she can read minds — and attempts to prove it by telling Scully that she knows she and Mulder have a child together. Sveta also says that she herself was impregnated during her multiple abductions, but the fetuses were taken from her body. Unsurprisingly, this hits close to home for Scully — it was speculated during the show's initial run that an implant was placed in Scully's neck during her abduction and this is what eventually triggered her pregnancy.

Later in the reboot premiere, Scully is explaining something to Mulder, and says she did it, "because of my history, and because we have a child together." As Mulder and Scully begin their investigation of the government's use of alien technology to stage abductions and sightings, it seems possible that William could re-enter the picture. He is, after all, a huge part of the puzzle when it comes to Scully's abduction — the details of which remain sketchy. He'd now be a teenager, and we know that as a baby he showed supernatural abilities such as telekinesis. Has this continued, or is he living like a completely normal kid? William — and his DNA — could be the key to solving some of the mysteries that have plagued Mulder, Scully, and viewers for years.

Plus, seeing their son could potentially be a positive thing for Mulder and Scully — both individually and as a couple. (I know, I know — they're not together anymore in the premiere, but I refuse to believe they're broken up for good.) We'll have to wait until January to find out more about William, Sveta, and the government's conspiracy — but, based on the premiere, it looks like the reboot will be as exciting, emotional, and well-acted as we all hoped.

UPDATE: Although it remains unclear whether William himself will get any screen time during the reboot, David Duchovny confirmed during a post-screening panel that clues and references will be present throughout the six episodes "because Mulder wants to know, too." Chris Carter has also confirmed that clues about William will surface throughout the episodes.