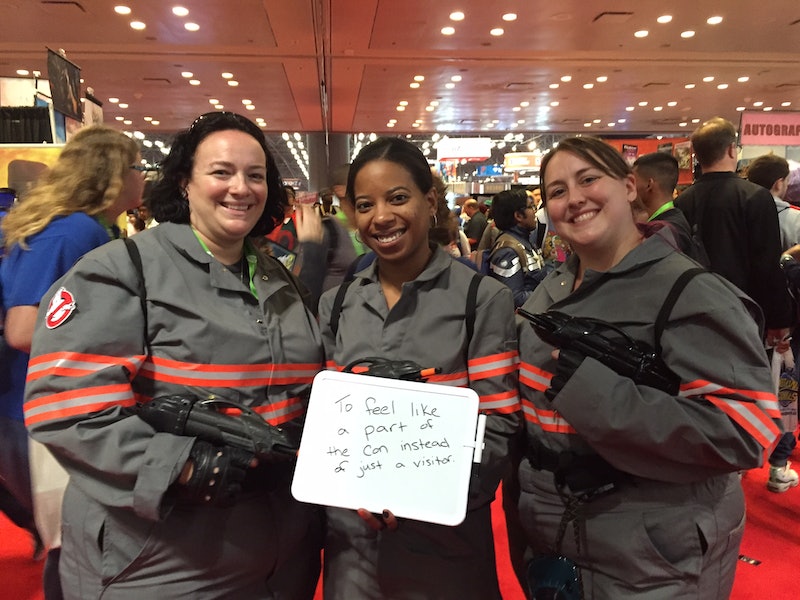 Going to comic cons can be an incredible experience worth waiting all year for. Whether you're there to observe, try your hand at cosplay, or compete with the big dogs for the best cosplay of con, it's an all-around good time. That is, unless you're a woman who's been harassed by another con-goer. Despite programs like New York Comic Con's "Cosplay is Not Consent" there's only so much the people who run the convention can do to stop the people on the show floor. In 2014, Bitch Media did a survey that found that 59 percent of men and women comics fans who took the survey online thought that harassment at cons was a problem. Last year, popular New York cosplayer Yaya Han told The Daily Dot that she was actually groped twice at NYCC. And even though I haven't cosplayed while attending the con, I have experienced casual sexism from men on the show floor, including one man who called me "toots" and asked me to go buy him a water from a nearby concession stand while I was attempting to interview another attendee. So why do women cosplay when the risk of harassment is still a factor? I asked 19 women at NYCC to find out.

The good news is that despite some folks whose actions could ruin the fun, the percentage of female attendees at NYCC actually grew 60 percent from 2011 to 2014. Women are going to cons and enjoying themselves. The potential for a snide remark or unwelcome advance isn't stopping them from dressing up as their favorite characters and having a good time.

And that includes these ladies at New York's Javits Center:

Because it's exciting to create and become a character you admire

Women should have the liberty to express their inner self.

It's good to be bad sometimes.

A woman doesn't know how precious her voice is until it's been silenced.

It makes me feel like I'm part of something bigger.

Because life is too short to just be one girl

I cosplay because it's Awesome

It's my first time. It looked like fun so I tried it & it is!

To feel like part of the con instead of just a visitor.

Cosplay is transforming and super fun!

And she really meant it. She gave me this gummy shark to brighten my day:

Someday, I hope this gallery could come with some stats about how low reports of sexual harassment are at cons, but until that day, I'll just take solace in the fact that these women are doing their thing their way, because they damn well please.

For more on Cosplay, check out Bustle's mini-documentary: