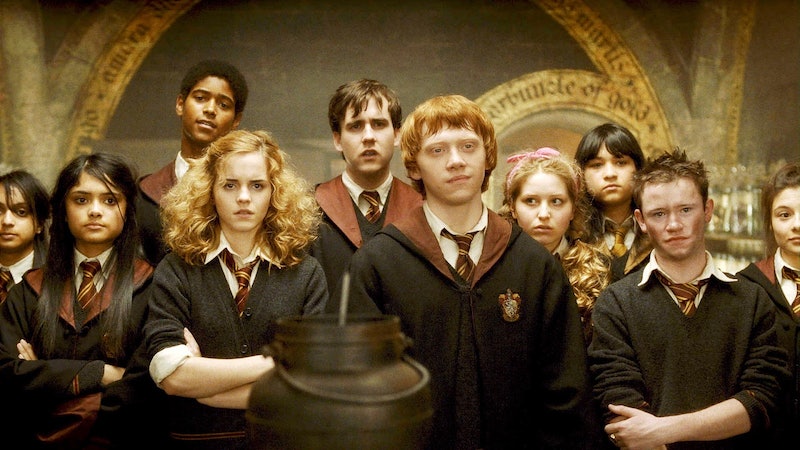 In spite of their flaws, the eight Harry Potter films are pretty freakin' fabulous. But Potterheads agree, and I speak for us all when I say this: The books were better. Of course, we all know that.

The books may be better, but that didn't stop us from helping Harry Potter and the Deathly Hallows - Part 2 shatter box office records during the summer of 2011. Today, nearly 20 years after J.K. Rowling published the first book in the saga of The Boy Who Lived, Harry Potter is an institution. Merchandising may have slowed down a bit — you know, aside from Hot Topic's all-encompassing Harry Potter selection — but the fandom is still going strong.

Sometimes, though, in the middle of your umpteenth Harry Potter marathon, you've got to pause to mourn what could have been. Each of us has a bugaboo or two about what should — or should not — have been left in — or taken out of — the film versions. As usually happens in page-to-screen adaptations, Harry Potter lost some characters and picked up a few all-new scenes (such as Harry's pretty, useless flight around Hogwarts in Harry Potter and the Prisoner of Azkaban).

I'm not totally knocking the films, but I do think we could have had better. The following are the 14 most underrated parts of the Harry Potter books that wound up on the cutting room floor. Raise a glass of pumpkin juice to all we lost along the way, and let's dive in.

In their journey through the Hogwarts underground, Harry and crew must face a series of puzzle rooms, each devised by a different Hogwarts professor. Professor Sprout's room has a devil's snare plant, Flitwick's has flying keys, McGonagall's has the giant chessboard challenge, Quirrell's has a troll (because of course it does), and Snape's room has a logic puzzle involving seven bottles and a poetic series of clues. In the book, Hermione solves the puzzle and tells Harry which potion to drink in order to move ahead to the room with the Sorceror's Stone. In the film version of Harry Potter and the Sorcerer's Stone, however, Snape's puzzle room was nowhere to be found.

After learning that Hogwarts is basically run on the backs of house elves, Hermione founds the Society for the Promotion of Elfish Welfare (S.P.E.W. for short). No one else shares her passion for activism, however, so Hermione campaigns alone. She starts knitting tiny socks and other garments and hiding them around the Gryffindor Common Room, hoping to free the elves who clean it. Dobby's enthusiasm for his life of freedom is odd in the house elf community, however, and the little cleaners are so incensed by Hermione's attempts to free them that they stop cleaning Gryffindor altogether.

There are a few things every Potterhead knows about Harry's appearance. One, he has the same green eyes as his mother. Two, his hair is black, and is always a messy sort of mop-top, even if you cut it. Both these things are left out of Movie Harry's appearance.

Now, the reason Movie Harry doesn't have green eyes like his mother's is that actor Daniel Radcliffe had a bad reaction to contact lenses while filming Harry Potter and the Sorcerer's Stone. The folks in charge decided it was A-OK to let Radcliffe use his nice blue eyes when portraying Harry. Because I have a hard time telling the difference between blue and green eyes, this doesn't miff me so much.

But Harry's hair. Harry's hair. HARRY'S HAIR. Book Harry has jet-black hair, while Movie Harry's is just sort of brown. What the what? You're telling me you can dye Tom Felton's eyebrows once a week to keep them silvery blonde, but you can't dump some Black No. 1 on Radcliffe and call it a day?

I could forgive Harry's hair color if they'd at least kept the style the same. But no. Harry's hair changes in practically every movie. Harry Potter and the Goblet of Fire did the best, in my opinion, and the Sorcerer's Stone and Chamber of Secrets styles weren't terrible. But Order of the Phoenix? Half-Blood Prince? Why not just shave his head, movie people?

Sorry, I get emotional.

People who haven't read the Harry Potter books have no idea who Peeves is, and that's sad. The poltergeist has been the Hogwarts class clown — sorry, Fred and George — since 993, 1,000 years before Harry met Sirius Black. He sings awful songs, writes dirty words on chalkboards, and makes Filch's squibby life even more difficult. Aside from Dumbledore, the Bloody Baron, and the Weasley twins, Peeves has exactly zero respect for anyone, though he did fight for the school during the Battle of Hogwarts.

Luna Lovegood first appears in Order of the Phoenix, but it isn't until the last book that we really get a glimpse into her family life. In Harry Potter and the Deathly Hallows, when Harry and co. wind up at Luna's home, they make an unexpected discovery in her bedroom.

"Luna had decorated her bedroom ceiling with five beautifully painted faces: Harry, Ron, Hermione, Ginny, and Neville. ... What appeared to be fine golden chains wove around the pictures, linking them together, but after examining them for a minute or so, Harry realized that the chains were actually one word, repeated a thousand times in golden ink: friends ... friends ... friends ..."

Potterheads know that Luna was a lonely outcast who was accepted only by the few people she painted. She makes no efforts to hide her lack of friends, saying that being a part of Dumbledore's Army approximates the experience of having them. Luna's portraits are heartbreaking, and it's a shame they were left out of the film.

At the beginning of Harry Potter and the Chamber of Secrets, we learn that it is the 500th anniversary of Sir Nicholas de Mimsy-Porpington's death. He invites Harry, Ron, and Hermione to his deathday party, but because such events aren't usually attended by living persons, it has little to offer them. The ghosts serve severely spoiled food, evidently the only kind they can come close to tasting, and it's pretty disgusting to the Hogwarts students. Still, it was an interesting part of the novel, and it's unfortunate that the scene was cut from the film version.

There aren't many stories more tragic than that of the Longbottoms. Knowing that there were two babies who could possibly fulfill Professor Trelawney's prophecy, Voldemort decided to eliminate both Neville and Harry to save himself the trouble. He sent a group of Death Eaters after Alice and Frank Longbottom, and they tortured the couple with the Cruciatus Curse, driving them insane.

Since the attack, the Longbottoms have lived at St. Mungo's, the wizarding hospital, and Neville has been raised by his grandmother. Although Neville visits them regularly, his parents do not recognize their son. Alice gives her son gum wrappers when he visits, and he keeps her tiny gifts.

Winky is the Crouch family's house elf, and winds up being something of an alcoholic after she's released in disgrace at the beginning of Harry Potter and the Goblet of Fire. During the Quidditch Cup, Barty Crouch Jr. orders Winky to steal Harry's wand and use it to cast the Dark Mark. For this, Crouch Sr. sacks her, and she goes to live at Hogwarts with the other house elves, including Dobby.

But in the film, Winky just doesn't exist. Instead, Crouch Jr. casts the Dark Mark himself, and the audience misses out on seeing one of Rowling's most interesting and troubled characters.

9. Who Is the Half-Blood Prince?

In Harry Potter and the Half-Blood Prince, Harry, Ron, and Hermione spend the entire novel trying to figure out the real identity of the mysterious — and possibly dangerous — Half-Blood Prince, who once owned Harry's potions textbook. It's a huge plot point, weaving through every other narrative. But in the film, the mystery is fairly short-lived, and it pretty much ruins the shock of learning who the eponymous Prince really is.

For four books, Hermione had buck teeth. In Goblet of Fire, Malfoy hits her with an unfortunate curse that causes her teeth to grow at an alarming rate. Hermione fibs when she's in Madam Pomfrey's care, and ultimately comes out of the scrape with a perfect set of chompers. When filmmakers' attempts to give Emma Watson a set of rabbit teeth fell short, the plotline was scrapped altogether.

Veela don't get much mention in the Harry Potter films, but their feminine wiles provide plenty of comedy during the Triwizard Tournament. They can seduce practically any man, and transform into harpy-like creatures when angry. Fleur and Gabrielle Delacour are one-quarter Veela, but the films fail to mention this.

Actor Matthew Lewis' triumph over puberty is so prominent that Tumblr turned "Longbottom" into a verb. But fans know that Neville himself underwent major changes over the course of Rowling's seven novels. The films touched lightly on poor Neville's ineptitude, but didn't go nearly as in-depth as they could have into his fears of being a squib and his relationship with his friends.

It's unfortunate that the Order of the Phoenix film left out Quidditch entirely, because it's pretty huge in that book. As Gryffindor's Keeper, Ron plays poorly in a match against Slytherin, prompting the snakey house to compose "Weasley Is Our King," a song about Ron that unnerves him whenever he hears it. Intent on making Gryffindor lose, the Slytherins taunt Ron with the song all year, even making "Weasley Is Our King" badges to wear on their robes. When Gryffindor wins the Quidditch Cup, they rework the Slytherin's lyrics to celebrate Ron instead, and the youngest Weasley brother finally has his chance to shine.

The Harry Potter films don't address Peter Pettigrew's fate, leaving viewers to wonder what exactly happened to the rat. He dies after running into Ron and Harry at the Malfoy Manor in Harry Potter and the Deathly Hallows. In the struggle, Pettigrew loses his wand to Ron and attempts to strangle Harry. When Harry reminds him that he spared his life, Pettigrew releases The Boy Who Lived, and is immediately strangled by his own silver hand ("gifted" to him by Voldemort) for the betrayal. It's a gruesome scene, to be sure, but leaving it out of the films was more terrible.