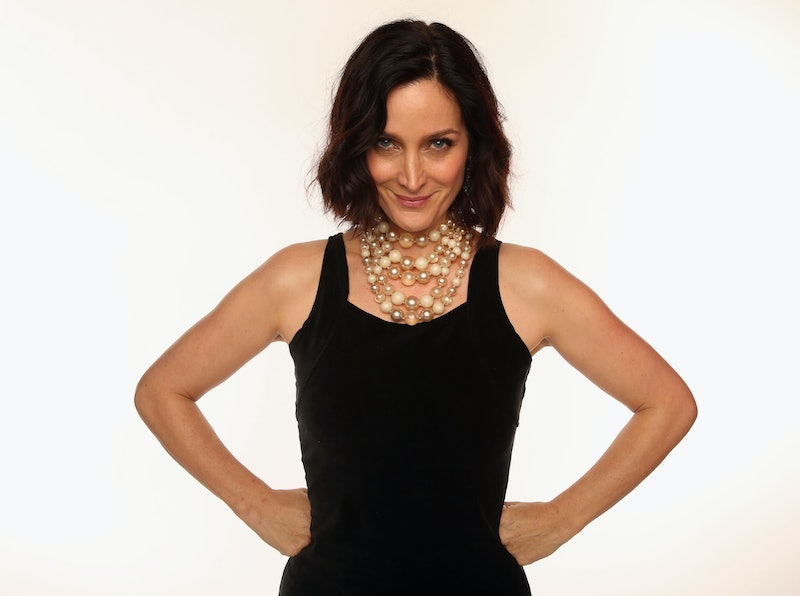 As if the prospect of learning all about the new Netflix series, Marvel's Jessica Jones wasn't exciting enough its own (Krysten Ritter, fan girl, here), some very exciting news dropped at the 2015 New York Comic Con panel for the upcoming series. While it was extremely exciting to see the cast and creators, finding out that Carrie-Anne Moss is playing Jeryn Hogarth on Jessica Jones at the outset of the panel was some seriously exciting and kick-ass news. You know, because this show wasn't already awesome-sounding enough.

The character of Jeryn Hogarth is a man in the comics, so guys, this is a BFD. In the Marvel universe, if you look up Jeryn, you'll find images of a semi-balding older man with spectacles, who's a lawyer, most famously representing Iron First. Who doesn't love a good gender-bent comic adaptation? She was previously listed as "Harper," so this revelation at NYCC is new.

This also basically confirms that the "Defenders" in these Marvel Netflix series are what comic book fans know as the Heroes for Hire. In Marvel comics, Jeryn Hogarth is the legal aid and boss of Luke Cage and Danny Rand/Iron Fist (the original Heroes for Hire) and also employed both Misty Knight and Colleen Wing. Now Simone Missick has been cast as Misty Knight for the upcoming Luke Cage Netflix series. While plenty of comic book characters have joined this organization, including the White Tiger and more than a few Avengers, the only missing piece here, in my opinion, is Colleen Wing. Start your fan-casting engines! The character Jeryn Hogarth has also been associated with Kitty Pryde — who will most likely not appear in the MCU, but it's still fun to think about. Plus, it's not impossible for mutants to appear in the Marvel Cinematic Universe, as we learned with Quicksilver and Scarlet Witch in Avengers: Age of Ultron.

So it seems as if the raggedy Hell's Kitchen superheroes of the Marvel Netflix series may have found their leader, their personal Nick Fury, if you will. An actress like Carrie-Ann Moss, who we all remember from The Matrix, Chuck, and Memento, could not be a better choice. "It's rare for me, when reading scripts that I am surprised...the script is impeccable...as someone who's embodied that's embodied that female action warrior, to see Krysten Ritter do it on a whole other level, it's exciting," she told the audience at NYCC.