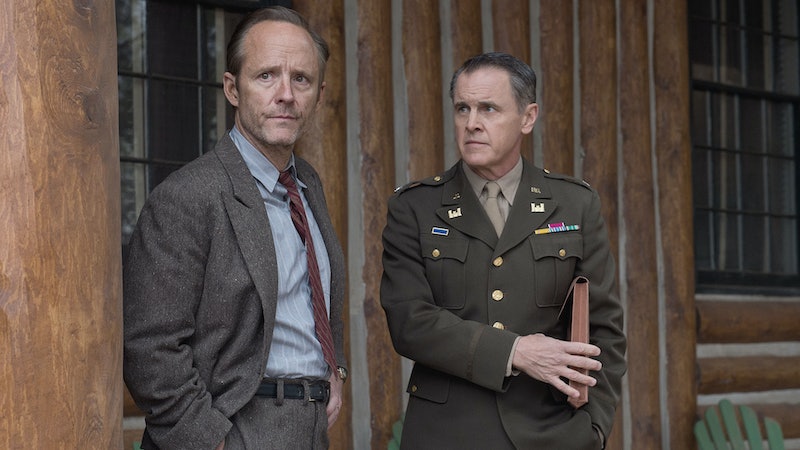 For those who have yet to watch WGN America's incredible new series Manhattan , find a way to do so as soon as possible. The series focuses on the dramatic, secretive project of creating an atomic bomb during World War II, just two years before the dropping of a bomb on Nagasaki in Japan that ended the war for good. Manhattan follows two groups of scientists working on two different bomb designs, but focuses mostly on the scientists involved in this competition of sorts as well as their private lives. We get to see a rich array of characters both American and foreign who worked on the real-life Manhattan project, with actual real-life scientists' names peppered throughout Season 1. Season 2 premieres Tuesday night, so here is your official recap of Manhattan Season 1 to catch you up on just how much drama there really was when making the atomic bomb.

The best way to truly understand what was happening during the time of the Manhattan Project (as told by Manhattan) is to divide the story up by the main characters at the main science camps. On the one hand you have Frank Winter, a gruff scientist who has been through the horrors of actual battle in World War I, attempting to make an implosion-style nuclear bomb. On the other side you have Charlie Isaacs, a young, whip-smart scientist on Reed Akley's team which is attempting the "Thin Man" bomb creation. Here's where everyone stands as of Season 2.

As we begin Manhattan, we're first introduced to Frank Winter and Charlie Isaacs. Frank has already been working at the Manhattan project before Charlie joins. Both Frank's and Reed's teams are vying for Charlie who eventually goes with Reed's team, leading to some uncomfortable and tense moments personally between the two and their wives. Frank is more than determined for his team to be the winners of this bomb race. After facing many setbacks, Frank decides on using the "implosion" technique for his bomb, but unfortunately one of his own team members is taken in for questioning as a spy, thanks to Frank himself. Frank attempts to get his team member, Sidney, released, but he escapes and is shot despite Frank actually getting the job done.

Throughout the season, we see Frank struggle to perfect his design with several setbacks including not being able to obtain the amount of plutonium he needs, several safety concerns at the Manhattan project, and a ever cold and distant relationship with his wife at home, partly due to the fact that his maid is also his mistress. At first it seems as though two saviors are here to help Frank, but neither works out. One is real-life scientist Dr. Bohr who doesn't seem interested in working on this kind of weaponry. The second is a group of British scientists who have also been working on the implosion-style bomb, but they reveal they've hit roadblocks and are not interested in doing so again with the Americans.

Late one night around Christmas, Charlie meets Frank and the two decide to work together to help fix the problems on the implosion bomb. Charlie backs out after Akley discovers their plan and threatens to expose them, but things are much too late in Akley's camp, Thin Man is never going to work thanks to some issues with the plutonium. Frank meets with Akley and tells him he's willing to work together to create the bomb before the Germans who are clearly beating the American team, but Akley can't face the idea. He shoots himself in his car, Frank tells his wife about the bomb building, and the season ends.

Charlie Isaacs comes to Los Alamos, a town not even on the map or known by even the Vice President, without any clue what is being built on site. He quickly discovers the truth and is told not to say what he's working on to anyone. Of course, he eventually tells his wife but their relationship isn't as secure as it seems. Charlie joins Reed Akley's group to work on the Thin Man design over Winter's implosion-style bomb. At first it seems as though things are going well until Charlie and Winter's teammate Helen travel to Tennessee to take a look at the reactors making the plutonium both camps need. Unfortunately, the plutonium and the reactors are unstable and could lead to a huge radioactive catastrophe. Charlie and Helen attempt to find a way to stop the reactor and during their trip they begin a romance which continues when they get home, despite Charlie's marriage and Helen's new relationship with fellow teammate Paul Crosley.

Charlie quickly realizes that the Thin Man model won't work without the purest plutonium possible, an issue that is non-existent with the implosion-style technique. Charlie proposes that he and Frank secretly work together; Charlie works on the math to fix the shockwaves issue for the implosion bomb, and Frank gets the resources they need for testing. Unfortunately, Akley discovers their secret dealings thanks to Crosley, from there Charlie's work life and home life are tested thanks to Abby's desire to leave the base and divorce him.

Both wives of the main scientists go through a lot in Season 1. Liza was a well-respected botanist who gives up her promising career to support her husband and come to Los Alamos. She grows rather frustrated without anything to do and has issues with mental stability throughout the season, and decides to get a job working with pregnant women on base. She soon realizes that there is an issue with radiation levels but allows herself to think the worst soon her mental instability takes hold. She moves on to political aspirations and runs for a seat on the counsel at Los Alamos after taking some medication. Liza suspects that her maid was Frank's mistress though the couple never has confrontation about it. But, Frank does eventually tell Liza just what's going on at the base. Look for Liza to continue having mental troubles as Season 2 progresses.

Then there's Abby who starts the show off homesick and underwhelmed by her life in Los Alamos. She attempts to visit her family but is rebuffed by the watchdogs at the base. She eventually strikes up a romantic relationship with Elodie, the wife of her husband's rival. Abby also knows that Charlie is having an affair with Helen. But, when things go wrong with her own affair/relationship, including being sexually assaulted by Elodie's husband, she betrays Elodie for Charlie's work. Abby ends the season wanting to leave Los Alamos for good, even if that means divorcing Charlie whom Abby believes has changed for the worse since they moved.

Whew! A lot happened in just a few episodes of Season 1, so I can't wait to see what Season 2 brings this Tuesday.