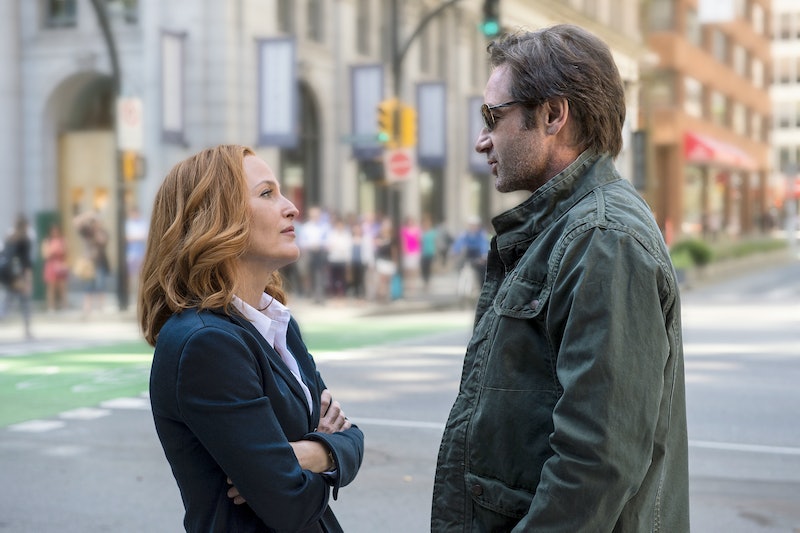 Like a lot of (obsessive) fans of The X-Files during its original run, I've had mixed feelings about the upcoming reboot premiering on Fox on Jan. 24. On the one hand, I've loved this show so hard for so many years, and the chance to catch up with Mulder and Scully again after a long absence is almost too good to resist. On the other hand, the second X-Files movie was pretty terrible, and I'd love to let the series rest in peace rather than tarnishing the legacy any more. Of course, then there's the whole "Mulder and Scully aren't together anymore" bombshell that creator Chris Carter dropped on us a while back, and that was enough to send me over the edge into the land of, "Nuh-uh, don't you dare put this garbage on my TV." I'll still watch, of course, hoping that Carter has enough sense to get his two heroes back together again at the end, as is meant to be, but I'm not really happy about the way things stand when the reboot begins. After all, is The X-Files really the X-Files without a united Mulder and Scully?

Carter tried to assuage critics of the decision to break up the most legendary FBI agents on TV during the X-Files panel at New York Comic Con on Saturday, saying we only need to give it a chance and we'll realize it was the right decision. "We wanted to be true to the passage of time, and Mulder and Scully have their differences," he said, convincing absolutely no one. While he's right that Mulder and Scully are two entirely different people who disagree about a number of things, that's not some new development. It's always been the case, and in fact it's those very differences that brought the characters together in the first place. To suddenly act as though the central force of their relationship is behind its end is a bit hard to swallow.

Of course, Carter does have a point that time changes people and that couples can grow apart, no matter how close they were at one point. But as a longtime fan of the series — and a longtime Mulder and Scully 'shipper — it does feel like a bit of a slap in the face. We were made to wait a full nine seasons to get actual confirmation of their relationship (even though you'd have to be blind not to have known it all along), only to have it yanked away from us... and for what? If the X-Files reboot wants to bring back the magic and intensity of the original series, why did anything about Mulder and Scully's relationship need to change? After all, the focus should be on the cases and the way they work together to solve them, or at least attempt to do so. It's going to be a bit distracting if they can't work together because they're locked in a nasty divorce battle or are constantly sniping at one another because of unresolved relationship resentments.

Ultimately, it's Carter's show and he can do whatever he wants with the characters he's created, but choosing to bring the show back while undoing the progress of the original nine seasons seems to counteract the effect of activating the audience's sense of nostalgia. Fans are mourning for the good old days of Mulder and Scully, and are not interested in watching a relationship collapse and dissolve, despite how much these two have between them. Let's just hope this is an ill-advised grab for ratings, because you know we'll be tuning in for the moment Mulder and Scully realize how stupid they were to let each other go.