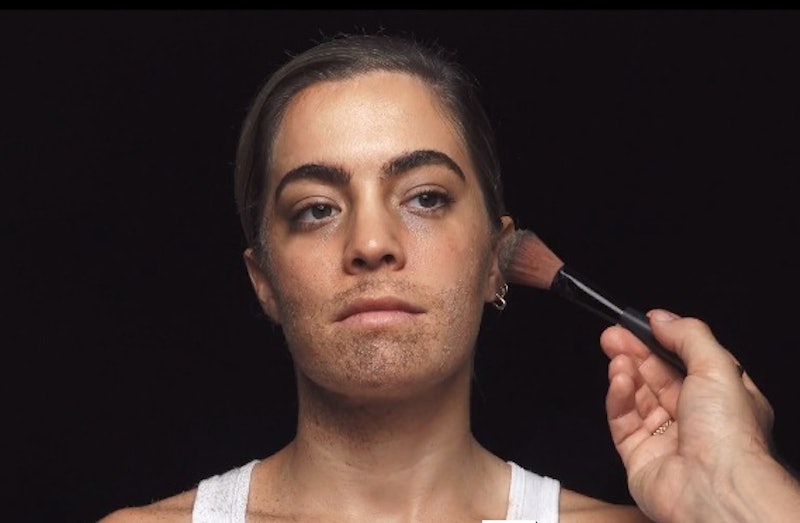 There's a new exhibit in New York that is challenging visitors to consider the gray areas of the gender binary in order to become more inclusive, open-minded humans: The Crossover Installation at Brookfield Place’s Move! Exhibition. Since most of us were little kiddos in kindergarten, we were taught that there were certain ways men and women were supposed to look and act. Pink and kitchen sets were for girls while blue and pickup trucks were for boys. Girls were supposed to be sweet and small; boys were supposed to be rough and mischievous. But what happens if you're not on either end of a spectrum? What happens if you're somewhere in between?

According to Gaby Wilson at MTV News, the exhibition, curated by Visionaire co-founder Cecilia Dean and New York Times writer David Colman, uses makeup to change a participant's gender over the span of 40 minutes.

The most interesting thing is that once the subjects were transformed to an opposing gender, their behaviors sometimes started to slowly shift to adopt that new role. James Kaliardos, the makeup artist behind the exhibit, told MTV News, “I’ve done this sort of thing back and forth through the years, and every time I’ve made […] a woman into a man, this more masculine part of themselves emerges, their behavior, just by doing the makeup. Just by having this topical, artificial cosmetic applied to their skin, they’re able to sort of behave in a way that they’re usually not able to behave in.”

According to Wilson, who transformed into a baseball hat-wearing dude, "After seeing myself with even just the exaggerated 'ruddy complexion' [...] I felt I needed to posture differently, tilt my head up, broaden my shoulders, smile less (but only a liiiiittle less)." Isn't is fascinating how adopting traditionally masculine features can make women feel the need to make themselves larger, bolder, and more serious?

Clearly the power of makeup can do more than hide those dark circles under your eyes come morning. Below are just a few other times makeup was used as a powerful tool to start an important conversation.

1. When A Makeup Artist's YouTube Video Took Down Misogyny

Makeup artist Jordan Hanz utilized the power of cosmetics to help her narrate her "Unattainable Woman" video, using her paints and tubes to create a statement against the unfair media representation of women.

2. When A Beauty Vlogger Took Down Makeup Shaming

Makeup vlogger Nikkie took to her YouTube channel to set the record straight for all the women of the world who love to do a smoky eye during daytime hours. She urges viewers not to make women ashamed of admitting they love makeup — women who might often be wearing that makeup for themselves and no one else.

3. When A Beauty Blogger Showed That Women Can't Win

With the help of makeup, British beauty blogger Em Ford highlighted the "between a rock and a hard place" position women are seemingly trapped in thanks to harmful beauty ideals. Without makeup, they're "hideous." With makeup, they're "trying too hard." Trying to highlight this absurd catch 22, she created a video with her bare face, featuring all the mean comments it had garnered on social media. As the video moves to a more made-up face, the comments only become harsher. The lesson?

She shares it at the end of the video: "You are beautiful. Don't let anyone tell you differently. Not even yourself."

More like this
42 Black Owned Fashion & Beauty Brands To Support Today & Always
By Mekita Rivas, Shea Simmons, Kui Mwai and Dominique Norman
"Transparent Eyeliner" Is The Perfect Summer Look For Makeup Minimalists
By Olivia Rose Ferreiro
TikTok's “Clean Girl Aesthetic” Isn't As Inclusive As You Think
By Tomi Otekunrin
23 Times Meghan Markle Dressed Just Like Princess Diana
By Bustle UK
Get Even More From Bustle — Sign Up For The Newsletter