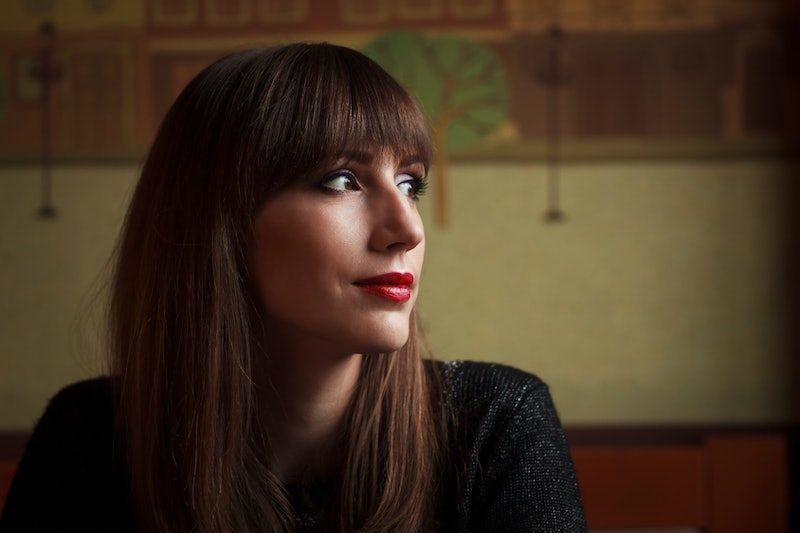 After more than a few drinks with my best friend — who always has the best and most candid things to say — I drunkenly (and ridiculously) asked him: "Do you think I'm going to be alone forever?" I realize it's a little premature to seal my fate at the ripe age of 27, but after four years, hundreds of dates, too many Tinder dick pics and a few heartbreaks — I think it's normal to wonder if it's actually going to work out one day. My friends are usually quick to nip that fear before I let myself go off the deep end of unhappily ever after, but being the blunt British man he is, my bestie went for it: "No. But I do think that perhaps you're being a little too precious about it," he said, smirking at me. When I asked him what he meant, he said what so many people will tell you if you're having a hard time finding love: You're being too picky in dating.

And that advice — apart from the dozens upon dozens of good and terrible dating wisdom you'll hear when you're solo — is the one that annoys me the most. Maybe because it's often said in a way that makes you feel like you want too much or that your standards are impossibly high, or it's what people will say to women when they're being 'too demanding.' It's also something that feels so personal—and can ignite fear — making you wonder that if you're to actually find love, that means you'll have to settle for something you don't.

But, then again, I'm single, and apparently 'picky' — so perhaps I'm doomed and don't know what I'm talking about. (Cue the violins.) What I do know and believe, however, is that being selective in who you decide to build your life and share your bed with is not such a bad thing. In fact, being so 'precious' about who I'm with has saved me a lot of trouble over the years. Here's how:

The next man I'm in a serious relationship with, I hope, will be the man I marry. I can't predict that from date one, of course, but unless I can see something pretty damn special happening between me and whoever I'm sippin' gin martinis with, I don't let it get past a few dates. That doesn't necessarily mean I don't enjoy myself along the way — some encounters are meant to be purely sexual or purely fun — but I'm not willing to give up my freedom, my single status or my ability to meet someone awesome just because I want to be in a relationship. Does that mean that I hold 'boyfriend and girlfriend' up on a pedestal? Perhaps — but I'm not about to share my binge-watching queue with you unless I actually, really, really like you.

2. You Aren't Afraid to Dream

Like most people, I have a fantasy in my mind of how I think my future partner will be. I can see what he looks like, I can come up with romantic notions of how we met and how we fell in love. I can probably dream of a million impossibilities if I let myself drink too much wine and harp on it. I know with all of my heart that whatever meet-cute I have playing in my head will likely be light-years away from how it all plays out. I might envision a tall hunk with a head of hair, a big laugh, a nice heart and a job in human rights, but if I fall in love with a shorter, bald man who is a damn good person with a job he loves and has killer moves in the bedroom? I'm sure I won't feel like I'm settling. The good part about being picky is that you've allowed yourself to think of what happiness means to you, and those beautiful, unrealistic romantic notions keep you hopeful, even if you know they won't come true — you know something will.

3. You Know Your Dealbreakers

Part of being selective means that I understand that every person, every date, every experience brings something unique to the table. It also means that by weeding through the duds, I've discovered exactly what matters to me, what doesn't and what I'm willing to compromise on. There are qualities that I never knew mattered to me until I started dating a lot. There are also things that I used to care so much about that now, I don't even think about. This helps me to pass time pretty quickly and to give time to someone who might be worth the trouble.

After my friend called me out on being picky — he was quick to follow up with: "But that patience will pay off one day, it just might take longer." He's right— being picky might mean that marriage and children and all of that jazz might take longer for me. But learning how to handle not having what you want right when you want it is a quality that'll serve me throughout life.

5. You Understand Your Worth — And The Confidence That Comes From It

It's not always easy to be alone, especially over an extended period of time. But while I've spent the majority of my 20s flying solo, I've done so much in that time to become a better, stronger person. I've collected stamps on my passport, I've invested in friendships I care about, I've practiced introspection and I've had honest conversations with myself about who I am, where I'm going and what I want. When I do ultimately meet what's-his-name, I'll be the best version of me that I can be. And he'll benefit from the confidence that I've earned in that time. More than anything though? I bet he'll understand where I'm coming from, because he's likely just as picky as I am. So when we do get together, we'll understand why we had to be selective all this time.