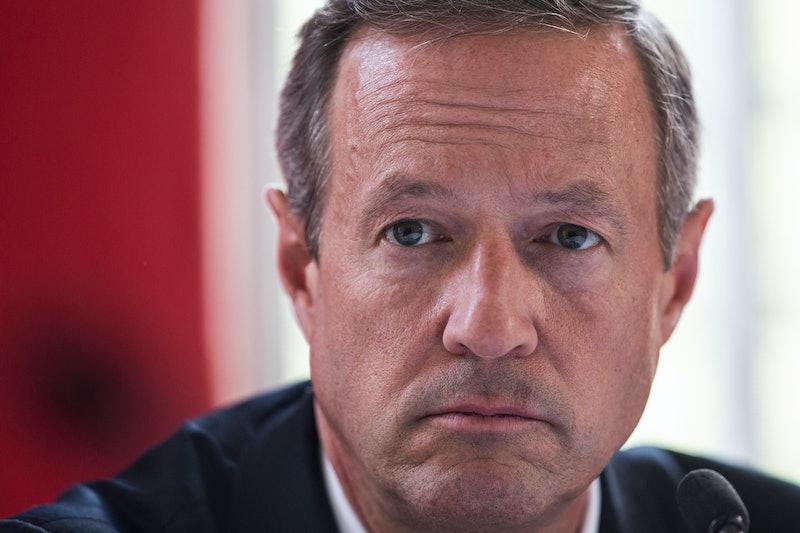 Although the first Democratic primary debate will largely be the Hillary Clinton/Bernie Sanders show, there will, in fact, be three other candidates on stage as well. All are largely unknown, but voters may be more familiar with one of them than they realize. Former Maryland Gov. Martin O'Malley inspired The Wire's Thomas Carcetti character. And if you've seen The Wire, you know that [spoilers ahead!] this resemblance isn't exactly a good thing.

The Wire — which, let me just say, is the greatest television series of all time — is about the city of Baltimore and the interconnectedness of the people and institutions that populate it. One central character is Carcetti, an ambitious city councilman who runs for mayor. Carcetti is initially presented as a wide-eyed idealist who genuinely wants to scrub Baltimore clean of crime and corruption and enters the mayoral election as a scrappy underdog.

But after winning the election and being forced to actually govern, Carcetti gradually becomes just the sort of politician he once despised. Towards the end of the series, he decides to run for governor, and that quest for higher office soon drives his every decision. In the last episodes, Carcetti doctors the city's crime statistics to make them appear lower than they are so that he'll have something to brag about on the campaign trail.

In an interview with The Daily Beast, series creator David Simon noted the similarities between Carcetti and O'Malley, who himself was once mayor of Baltimore. Indeed, they're difficult to ignore. Both Carcetti and O'Malley ran for the Baltimore mayorship as white city councilmen who weren't expected to win in the majority black city; both ultimately prevailed in the Democratic primary when the rest of the vote was split between two black candidates, then sailed into office in the general election.

O'Malley, like Carcetti, began his mayoral tenure with a focus on crime: CompStat, the interagency commission that's featured heavily in The Wire, is based on CitiStat, a similar anti-crime initiative that O'Malley created in Baltimore. Both men decided to run for governor and were accused of abandoning their earnest focus on crime in the name of that goal. Although, let's be clear that while O'Malley's actual record in Baltimore is debatable, Carcetti's mayorship in The Wire was unambiguously terrible.

One big difference that's worth noting: Carcetti's tenure as governor is a mystery — the show ends as he gets elected — but O'Malley did actually serve as Maryland's governor. In that office, he enacted a few policies that are genuinely cheered by liberals: most notably, a marriage equality bill, a comprehensive gun control package, and legislation that decriminalized small amounts of marijuana possession. And while Carcetti is an incredibly petulant human being, there's no evidence that O'Malley is anything like that.

Simon wrote on his blog that O'Malley "hates The Wire with a taut fury," but the two reportedly made amends last year. And in an interview with The Marshall Project, a news site covering criminal justice, Simon praised O'Malley's progressive policies on gay rights and the death penalty. It's nice to know that the two are mending fences — but O'Malley still probably won't be quoting Carcetti anytime soon on the campaign trail.

More like this
Eurovision Has Been Given A Whole New Look Ahead Of Its Liverpool Debut
By Bustle UK
Melanie Lynskey Plays A “Ruthless Leader” In 'The Last Of Us'
By Brad Witter
Pedro Pascal Barely Got Through The "Lisa From Temecula" 'SNL' Sketch
By Stephanie Topacio Long
Grammys Host Trevor Noah Made Adele's Dream Of Meeting The Rock Come True
By Brad Witter
Get Even More From Bustle — Sign Up For The Newsletter
From hair trends to relationship advice, our daily newsletter has everything you need to sound like a person who’s on TikTok, even if you aren’t.