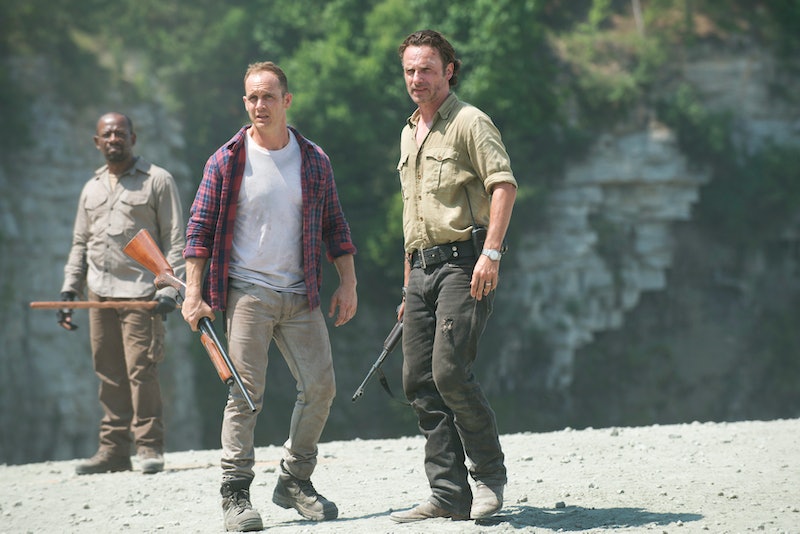 Before you read on, be warned, there are The Walking Dead spoilers ahead for the Season 6 premiere. Ethan Embry may have fit into Alexandria so well that it felt like he'd always been there, but really, we barely got to know his character before Carter died on The Walking Dead. During the group's epic battle with a herd of Walkers, Carter was bit in the face, and Rick "stopped him" before he turned — and before his screaming in pain could attract more walkers.

Throughout the episode, Carter and Rick were at odds. The new character didn't approve of Rick's position of power in Alexandria after his behavior in the final episodes of Season 5. Remember, even though Rick was justified in killing Pete and waited for Deanna's approval to do the deed, just before that he was running through the streets waving a gun and making a frenzied speech. In fact, Eugene stumbled upon a secret meeting Carter held about killing Rick, which almost turned into a shootout. However, Rick took control of the situation and saved Eugene's life.

Hopefully the Alexandria flashbacks will continue this season, because I enjoyed Carter's energy and how he played against the other characters. What can I say? I like human conflict on this show, and he was bringing it. However, I have to say, since he didn't pipe up in Season 5, Carter had a lot of nerve to go after Rick Grimes this way. Who does he think he is? May this be a warning to the other Alexandrians, I suppose. They aren't prepared to deal with "the real world" at all, and Carter's easy demise proves it.

Still, few people deserve to get Walker'd in the face. That was brutal. Point made, TWD. Don't mess with Rick Grimes — or Eugene. As Chris Hardwick put it on Talking Dead, "you threatened our favorite mullet. You had to go." He may have been an antagonist of sorts, but he was mostly harmless, and I'm going to miss Carter a bit on The Walking Dead.