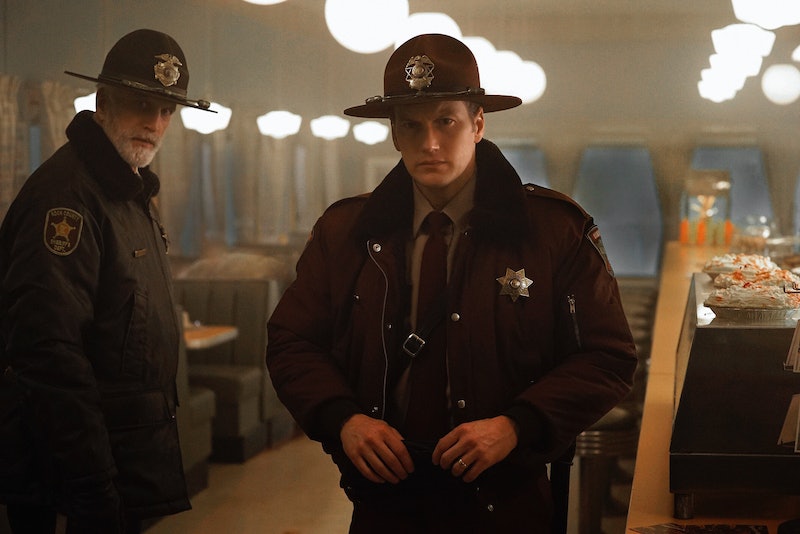 Last season, FX pulled off a feat that many who have seen adaptations go seriously, unforgivably wrong would have called impossible. The network debuted a series inspired by a cult classic movie (high-profile cult classic — the kind that gets nominated for lots of awards) featuring a creative team and cast with no ties to the film, and it worked. The first season of Fargo was successful because it captured the tone and character of the movie while pulling fans into a new case. One of the storytelling elements that appears in both the film and the show is the disclaimer that what the audience is about to see is "a true story." Every episode of Fargo Season 1 was prefaced with that claim, making the actions of the cold-blooded assassin Lorne Malvo feel even more sinister. Chances are, Season 2 will continue the tradition. So, is Fargo really based on a true story?

When it came to the truthfulness of the film, the Coen Brothers were often cagey about the origins of the screenplay. That the story of the most exciting and terrible few days in the life of Marge Gunderson were inspired by real events was a position that the auteurs maintained throughout the film's promotion, but backed away from later. In Ethan Coen's introduction to the published version of the screenplay, he writes:

The story that follows is about Minnesota. It evokes the abstract landscape of our childhood - a bleak, windswept tundra, resembling Siberia except for its Ford dealerships and Hardee's restaurants. It aims to be both homey and exotic, and pretends to be true.

The television show uses the disclaimer to the same advantage as the movie does. Even when dramatic depictions are based in fact, informing the audience helps them to see the movie or show through a different lens than they would something they assume is entirely fictional. Fargo plays out like a true crime story, and it's the juxtaposition of that and its larger than life characters and magnification of cultural quirks that make the film so beloved.

Fargo series showrunner Noah Hawley told the press at the network's Television Critics Association panel this spring that the movie's unique take on the genre is what the show is looking to preserve. "But now [Fargo's] evocative of a story, a true crime story that isn’t true, where truth is stranger than fiction," Hawley said, according to Flavorwire. Strange truths and straight-faced fictions are the show's bread and butter, and Fargo Season 2 will carry on that legacy with another case, expounding on the weighted comments Molly Solverson's kindly father made in Season 1 about his time on the force.

Both Molly and her father Lou (and the rest of the Fargo Season 1 and Season 2 casts) are original characters, giving the show the freedom to take them on a journey that will keep fans engaged until the very end. "If characters drive the story," Hawley told The Hollywood Reporter, "then you can give a satisfying ending to people."