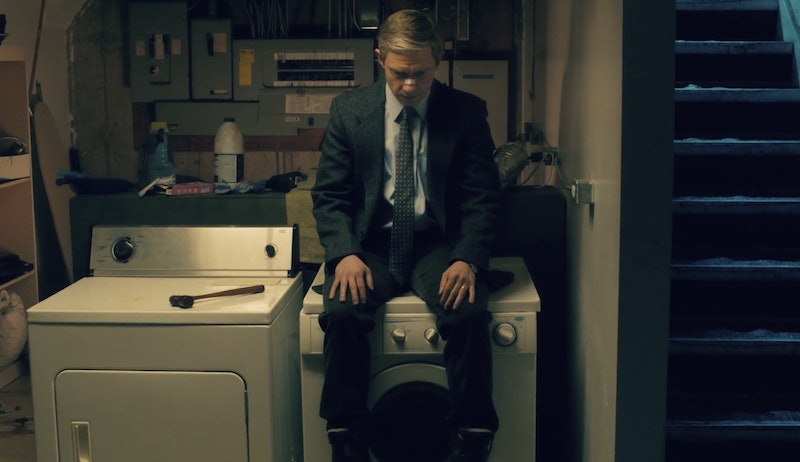 In an age where you can't turn your head without witnessing some new iteration of Hollywood hackery branded as a reboot, reimaging, retelling, or re-do, it's easy to fall into a blanketing and dismissive frame of mind regarding them all. But, wonder of wonder miracle of miracles, FX's limited series, Fargo (based on the Coen Brothers film of the same name) looks to be anything but all that. It has the cast of our dreams, an impressive visual look, and a lot of new stuff going on underneath the surface. In fact, we daresay we're excited for its debut — and not just because of the talent involved. Turns out there's more to this series than you think, so we've decided to break it all down for you. Better to know before you go, right?

It's Not the Same Characters

This is not the tale of Jerry Lundegaard and Marge Gunderson. Homespun murder may be on the agenda, but don't expect it to just be named stand-ins for the cinematic characters. The 2014 limited series is all about Lorne Malvo (Billy Bob Thornton) and Lester Nygaard (Martin Freeman).

It's Not the Same Story, Dunchyano?

The reason the FX series saw the light of day compared to the two previous attempts to bring Fargo to the small screen (once in 1997 with Bruce Paltrow and Robert Palm, and later on for CBS with Kathy Bates directing Edie Falco playing Frances McDormand's character Marge Gunderson), is because it doesn't borrow directly from the film's original story. Sure, there may be elements because it's all set in the same place, but it's not just a rehashing of the same old tale.

It Places the Film in a Timeline

Now, instead of being a standalone feature, the film Fargo will actually just be one story in a larger series of stories told in and around that same environment. Think of it like a comic book universe — only instead of fancy action heroes in spiffy, CGI'd magic, there's Martin Freeman sitting on a dryer with a broken nose. Smart!

Is it Still About Murder, Eh?

Yes of course! The ties that do bind this show to its cinematic compatriot are the big ones: namely, murder. And the dark comedy, natch.

I just spent 20 minutes reading a "How To Speak Minnesotan" e-dictionary, so I'll be prepared for any new, nuanced language that might head our way. Considering the quirky environment and way of life that those in the Fargo world are accustomed to, it wouldn't be right to do the TV series without that trademark niceness and charm in the face of literally everything.

Does it All Come Together? You Betcha!

Just check out the 11 teaser-y promos the network has put out thus far and try not to be swayed that this is, yeah/actually, a good idea:

So, go ahead, world: you have our permission to be excited and not-at-all eyerolly regarding the Fargo televisionization.

More like this
Another 'Sex Education' Star Has Joined The 'Doctor Who' Franchise
By Darshita Goyal
'SAS Rogue Heroes' Season 2 Is Set To Be An Explosive Watch
By Sophie McEvoy
Idris Elba "Breaks Out" Of London In 'Luther' Film First Look
By Sam Ramsden
You Definitely Know The Voice Of Shuri's AI In 'Black Panther: Wakanda Forever'
By Brad Witter
Get Even More From Bustle — Sign Up For The Newsletter