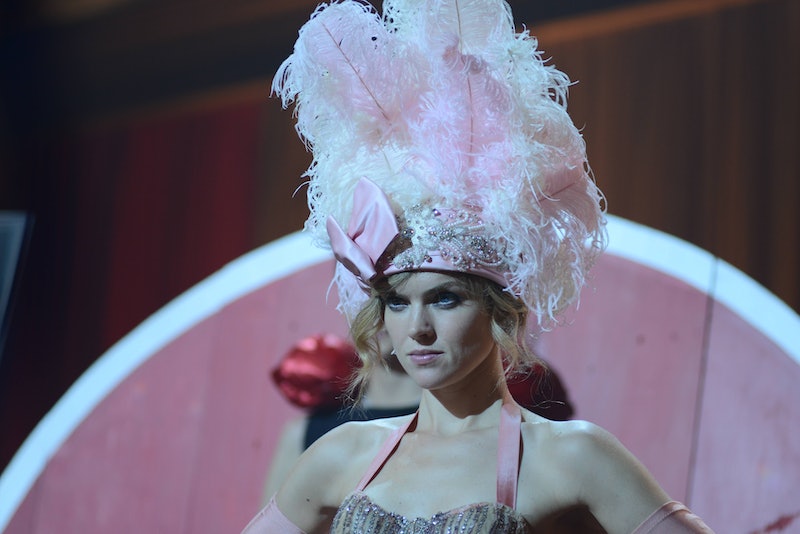 Though there are many to choose from, right now my favorite Gotham villain is Barbara Kean. Jim Gordon's ex-girlfriend went through an evil transformation towards the end of Season 1 under the tutelage of the repulsive serial killer Jason Lennon. After slaying both of her parents, she got comfortable in bad guy territory and quickly built up a club of allies in Arkham Asylum. Until recently, the popular internet theory was that Barbara would become Harley Quinn to Jerome Valeska's Joker. But then "The Last Laugh" blew that theory up to high heaven, leaving a new one in its place. Could Barbara become Gotham 's Joker herself?

Jerome's death set the message boards and social media ablaze. Gotham seemed to have been setting that character up for a long and terrifying reign over the city; the choice to take out the most obvious choice for the mythology's most famous villain was a bold one, and proved that this show has some teeth. Before Season 2 premiered, writer Bruno Heller told ComicBook.com that the Joker's origins would definitely be explored this year, so Jerome's death does not mean that the show is putting off incorporating that character. "The beginning of Season Two is the very earliest origins of how The Joker came to be," Heller said. He also called the Gotham version of this villain "pre-embryonic," which suggests that the Joker wouldn't be immediately recognizable to fans. Guys... how didn't I see this coming?

ComicBook.com got back in touch with Heller after Jerome's demise to run the Barbara-is-the-Joker theory by him. And while he didn't confirm or deny Barbara's possible future with Smilex and heavy clown make-up, he didn't shoot down the possibility.

100% possible. One of the central themes of the DC world is transformation and revelation. Absolutely, those kinds of – I wouldn’t want to call it playing with people’s expectations or gender expectations – but we’ve absolutely considered the possibility of a female Joker, and we haven’t… well I’ll stop myself from saying more because I won’t be able to stop revealing things.

Interesting. Heller's comments could serve as another red herring to throw fans off the real Joker's scent, but I'm going on record as saying I hope not. The Joker is a character who has already been iconically interpreted, most recently by the late Heath Ledger in The Dark Knight. The Joker looms over the Batman canon, and he's one of the villains that any adaptation of that world just has to get right in order to be remembered as a success. And what better way to subvert audience expectations than to make the audacious choice? There's even some canon precedence for a female Joker. In the animated movie Justice League: The Flashpoint Paradox, the Joker is Bruce's mother, Martha Wayne.

Erin Richards has been a terrifying delight so far as bad-Barbara; she's certainly got the chops to go full-Joker. And if the Joker is female on Gotham, my fingers are crossed for that choice to lead to a male Harley Quinn. Why not, right?