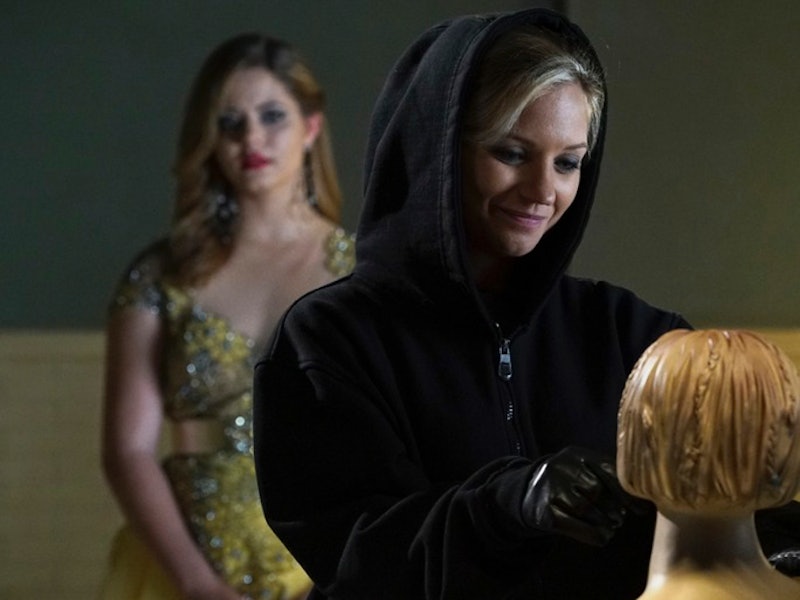 Just when you thought that you had seen all of the surprises that the Pretty Little Liars Season 6 finale had in store for you, including the reveal of Big A aka Cece Drake and all of the people she had helping her torment the liars for so many season, New York Comic-Con throws another bombshell our way. In a Pretty Little Liars Season 6 deleted scene, Cece is revealed to have had one more person in her corner, one that not even she saw coming. Who? Well, hold the hand of the nearest PLL fan, because this one is a shocker. As it turns out from the scene, Officer Barry Maple, of all people, was giving Cece a helping hand. So much for the Liars having an officer on their side.

The scene, though relatively short, has a lot of impact. It begins with Cece in the backseat of a squad car, looking absolutely bewildered by her surroundings and situation. She leans forward to ask the driver what is happening, and then Officer Maple turns around and tells her to, "Hit me hard, then take the car." I'm sorry, what?! According to her, "Mom made him an offer he couldn't refuse," although even she sounds unsure about why exactly Officer Maple was helping her. Heck, I'm confused about why Officer Maple is helping her.

The girls' parents are on a first name basis with him. He's always been so kind and helpful to the girls. We believed Gabriel Holbrook when he said that Cece had knocked Maple unconscious to escape police custody, but it looks like we should have remembered that everybody lies.

What does this mean for Season 6B? Well, there has been a time skip, so the fact that Officer Maple was complacent in Cece's schemes might not come back to bite the Liars in the butt again for a long time... or it might be a key part of the second half of the season. You can never quite tell with deleted scenes. Was it deleted because the creators changed their mind or because they wanted to save the reveal for a more dramatic moment just when the Liars thought their troubles were over? Either way, you can check out the missing scene at TV Line and then join me in bemoaning the fact that nine out of every 10 authority figures in Rosewood is absolutely terrible.

More like this
Everything To Know About The 'Pretty Little Liars' Reboot On HBO Max
By Mary Kate McGrath and Jack Irvin
Did *That* Character Really Die In The 'Stranger Things' Season 4 Finale?
By Grace Wehniainen
Wait, What’s Going On With Ben In That Umbrella Academy Season 3 Post-Credits Scene?
By Gretchen Smail
Pete Davidson Pops Up In This Hidden Scene From The Kardashians Season Finale
By Jake Viswanath
Get Even More From Bustle — Sign Up For The Newsletter