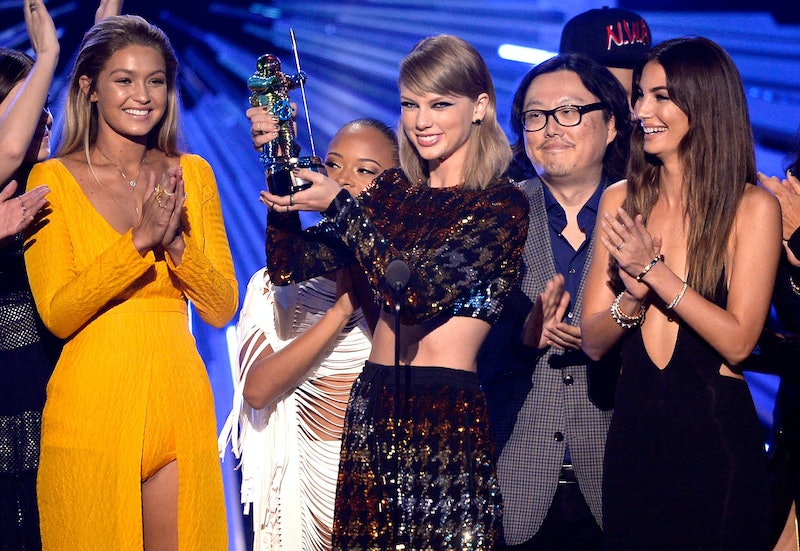 With the exception of maybe three people on the planet, everyone is gunning for a place on Taylor Swift's squad, and I'm sure there are thousands of fans who, at this very moment, are plotting ways to woo her into a lifelong friendship. But devotees can totally relax because, if it's going to happen, it'll be on the 25-year-old singer's terms. Swift recently revealed in Vogue Australia that she makes the first moves in friendships — and her boldness is yet another reason girls and women alike should admire her and follow her awesome example.

As you probably picked up from the number of times they are photographed at events and on stage, her famous friends are one of the most important things in Swift's universe. "My friendship group is one of my favorite things about my life right now," she said. "Our friends really have each others' back. It's the first time in my life that I've had anything strong like that in the friendship department."

If I had to guess, I would have said Swift has zero trouble making friends for obvious reasons: She's talented, seems fun and perky, and, most importantly, is freaking Taylor Swift. And this makes me love her even more: The lady isn't sitting back and waiting for people to approach her. If she digs you and thinks you're special, you're going to know about it. Here's what she had to say about how she became buddies with Lorde (whom she calls "Ella").

"A lot of the time I'll reach out to people to tell them they're great and a friendship will come out of them. Ella and I — Lorde — we met on our own because her album came out and I sent her flowers and told her it was great, and now she's one of my best friends."

The "Blank Space" performer added, "Friendship often comes from admiration and that feels like a natural way to be friends with someone because you've established you respect what the person does."

I adore the fact that she seeks peers who are equal to her and who motivate her to be a better person and performer — which goes to show she isn't using people to satisfy her ego or seeking companionship from women and men who aren't going to challenge her and call her out when she's wrong. Her squad includes strong and accomplished women like Selena Gomez, Karlie Kloss, Cara Delevingne, Lena Dunham, Lorde — and she seems to add to it with each show she performs.

Swift's fearlessness when it comes to taking risks and reaching out to people she admires is something a lot of people could benefit doing, even when they feel embarrassed to be caught seeming so vulnerable and emotionally naked. Making the first move in a relationship is a powerful way to take control of life — and it doesn't just apply to romantic partners.

The next time anyone hesitates before reaching out to someone they know would make an amazing friend, they should think: WWTD? And then go on and send a bouquet of flowers (but maybe only if that person just released an album).

More like this
Taylor Swift Cries In Sneak Peek Footage Of David O. Russell's Secretive Film 'Amsterdam'
By Jake Viswanath and Radhika Menon
Sadie Sink Would Escape Vecna From 'Stranger Things' With This Taylor Swift Song
By Grace Wehniainen
Here’s How Lizzo Is Supporting Abortion Rights After The Roe v. Wade Reversal
By Brad Witter
Taylor Swift's “Carolina” Theme For 'Where The Crawdads Sing' Soundtrack Is Here
By Jake Viswanath
Get Even More From Bustle — Sign Up For The Newsletter