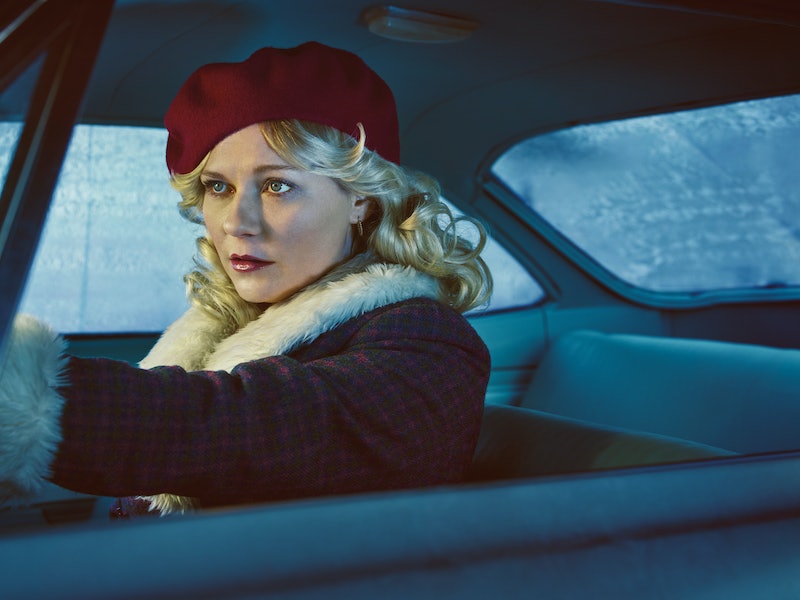 Oh, Peggy. What have you gotten yourself into? When it was first announced that Fargo Season 2 would star Kirsten Dunst and Jesse Plemons as small town beautician Peggy Blomquist and her butcher husband Ed, the question was always how exactly this unassuming couple would "find themselves caught in an escalating war between a local crime gang and a major Mob syndicate" as Entertainment Weekly puts it. What do they have to do the Gerhardt family or the Kansas City mob? Well, we got our answer as to what happened to Peggy in the Fargo Season 2 premiere — and it wasn't pretty.

The Gerhardts, South Dakota's premiere criminal empire, have three sons: Dodd, Bear, and Rye. (Wholesome Midwestern names if I've ever seen them.) Rye, the youngest, gets particular attention in the season's first hour. As played by Kieran Culkin, he's a jumpy hooligan who's tired of living in his two older brothers' shadow. Always feeling like has something to prove, he's quick to draw his gun when threatened... which unsurprisingly gets him in over his head pretty quickly. When Rye confronted a haughty judge in a local diner, we knew things were about to get ugly; but the speed with which things went from psychologically tense to physically violent was particularly breathtaking.

One shocking spasm of violence later, there are three dead bodies and a panicked Rye. He stumbles out into the snow where — after gaping at a UFO that happens to be flying by (WTF?) — he gets unceremoniously hit by a car and goes crunching through the windshield. One perfectly-timed pause later, the car hilariously starts up again and drives off, with Rye's body still dangling onto the hood.

What does this have to do with Peggy Blomquist, you ask? Good question. The first time we meet Peggy, she's cheerfully cooking dinner for her husband. (How do we know we're in Minnesota? Dinner involves tater tots and ketchup, of course.) After gabbing to Ed about a seminar she's excited to take, their peaceful meal is interrupted by some strange banging noises coming from their garage. Yep, you guessed it. Peggy is the one who hit Rye... and he wasn't quite as dead as she thought.

(If this sounds familiar, that's because it's literally the plot of the 2007 comedy-thriller Stuck, starring Mena Suvari — which is itself based on a true story.)

Naturally, Peggy didn't stay outside the diner and call for help. She didn't drive Rye to the local hospital. She didn't even drive her car home and immediately tell her husband. She drove home, parked her car in the garage, and proceeded to go calmly about her evening, as though simply ignoring the corpse in her windshield would make it go away — except, much to Peggy's surprise, Rye wasn't quite a corpse after all.

Only after waking up and attacking the Blomquists did Rye finally shuffle off his mortal coil, with a garden trowel in his gut courtesy of Ed. And, so the Season 2 premiere ended with Rye Gerhardt in the Blomquists' freezer, with Peggy and Ed as amateur murderers, and with these two disparate storylines on an inevitable collision course. The only question that remains is, how long will it take the Gerhardts to realize what happened to Rye? And what will happen to Peggy and Ed when they do?