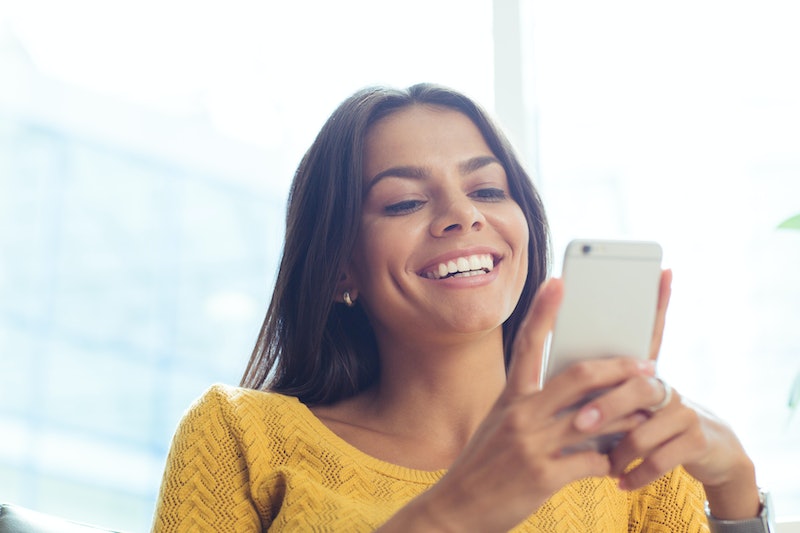 As someone who has a fear that, as I get older, I’ll end up with a prolapsed uterus, I’ve been adamant about doing my Kegel exercises. A prolapsed uterus may sound like the stuff of nightmares (because it is!), but it’s also a very real possibility that can occur after childbirth or simply because our estrogen levels decrease as we get older. I do not want my uterus to drop into my vaginal canal or, in a worst case scenario, dangle outside my vagina. Because this is a legitimate fear of mine, when I heard about Elvie, an exercise tracker that, thanks to an app, could actually show me exactly what’s going on with the muscles of my pelvic floor, I was all about it. Finally, I’d be one step closer to making sure my uterus stays put. To say I was relieved would be an understatement.

While you may think you don’t have to concern yourself with your pelvic floor muscles, because you’re the delightful age of 21 or 22, you are so wrong. You’re never too young to start your Kegel exercises, and Elvie actually makes it fun. Maybe it’s my competitive nature, but I was excited to see if I could outdo myself in the different exercises.

Every day I’d insert the Elvie and start my exercises using the app to guide me. If I wasn’t doing my exercise correctly, Elvie would let me know by telling me it couldn’t measure the strength, so I’d have to do it again. It kept me on track, and although my scores were bouncing up and down (because I realized I needed to concentrate more), I definitely felt my muscles getting stronger. I can’t even imagine how bad ass my score is going to be in a month. I might even be able to pick up bowling balls with my extra strong vaginal muscles. Maybe.

So should you give Elvie a try? Yes. Here are seven reasons why.

1. It Puts A New Spin On The Old Kegel Thing

For starters, Elvie is lovely. It’s appealing to the eye and that’s exactly what its designer, Tania Boler, wanted. As a woman’s health expert she knew that not only is it paramount that women strengthen those core muscles, but that in doing so, they wanted a product that was discreet and attractive. Elvie, in its sleek case, doesn’t have the look of a medical device, but rather something you’d find in your cosmetic bag. Boler worked with doctors and engineers to come up with something that not only works, but is pretty to look at, to be honest. No one wants to use an intimidating contraption to exercise their pelvic floor; they want something that's sophisticated looking.

2. It Teaches You How To Exercise Properly

When I talked to Boler she said that some women have a hard time exercising that part of the body correctly. In fact, 30 percent of women push down when a proper Kegel means pulling up those muscles. Elvie’s app forces you to get it right.

Although I know I need to pull up when exercising that part of my body, I tested the Elvie by pushing down to see what would happen. It was in those cases that the app didn’t register my pulse and made me do it again. There’s also the fact that all the exercises, in order to get higher numbers, involve you having to pull up. In one exercise you need to keep a gem above a line; something that can’t be done unless you’re exercising your muscles correctly.

Between the shape (it’s like a small egg) and the medical grade silicone from which the Elvie is made, it’s a good fit. Of the participants in their test trials, 98 percent reported that it felt comfortable. Of course you can feel it, but not in a bad way; just in a, “Oh, it’s there,” way. Boler tells Bustle, women have been strengthening their vagina for centuries. In fact, Aborigines used stones to strengthen those muscles. Although I’ve never put a stone inside my vagina, I’m willing to bet that the Elvie is far more comfortable.

And because not all vaginas are the same, Elvie comes with an optional cover that you can put on if you need it to be a bit bigger to fit your body perfectly.

4. You Can Do It Anywhere

You can do your exercises either standing or lying down. Personally, I opted for lying down because, well, I’m for anything I can do lying down. But I guess, if I really wanted to, I could do it on the subway or even standing in line at the coffee shop. However, I think I need a bit more practice before I venture outside my apartment and off my couch.

5. You Definitely See And Feel Progress

As I said, my numbers fluctuated because in some cases I’d get distracted and I either wouldn’t focus as much as I should or, being a competitive brat, I wouldn’t relax when I was supposed to in the first few days. But now that I’ve gotten a handle on what I have to do and the fact that you have to relax in order to exercise properly, I’m definitely seeing and feeling results.

Even if you don’t plan on having kids or getting older (I know I’m not planning on doing either, especially the latter if I can avoid it), Elvie is still an important tool. Stronger pelvic floor muscles means better lubrication and stronger orgasms. For those of you who haven’t made a Faustian pact with the devil, Elvie will help prevent that dreaded prolapsed uterus I mentioned, as well as a prolapsed bladder, and general weakened muscles that come with age.

7. Your Vagina Deserves It

“We’re trying to change the conversation [around the vagina]," Boler says. Elvie is clearly leading the way by giving women the better technology they deserve to effectively make their vagina a stronger and healthier place. In using Elvie, you’re exercising your core strength, which is essential to women throughout their lives. Your pelvic floor is just like any other part of your body: The more you exercise it, the stronger it becomes, and with strength, things just work better.