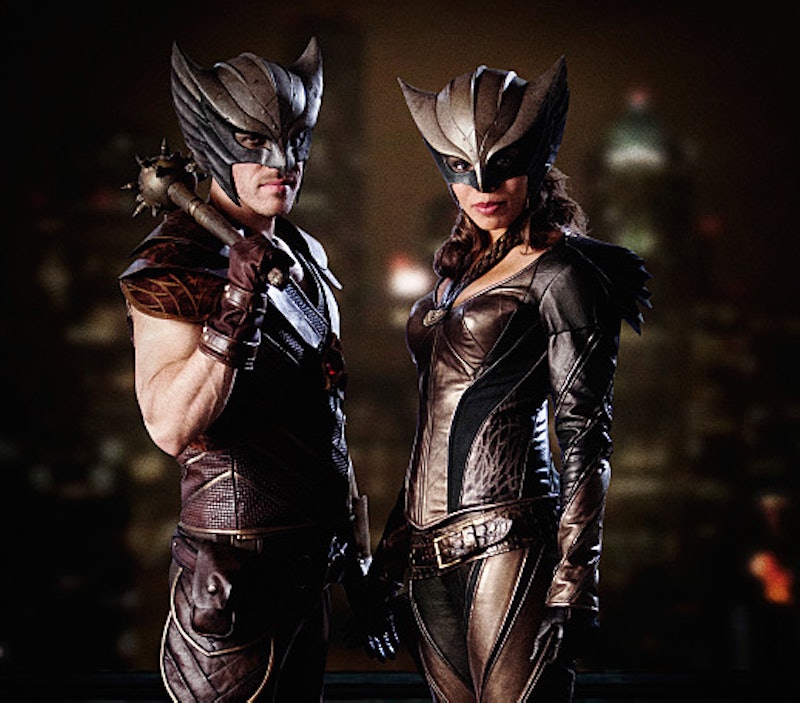 The new superhero spinoff on The CW sounds absolutely bananas in the best possible way, from the "fabrication room" on a time travel ship that helps them dress for whatever time period the team lands in to the interpersonal relationships bound to spring up with all of this vigilante energy on board. During the NYCC panel on Sunday, actress Ciara Renée teased the relationship between Hawkgirl and Hawkman on DC's Legends of Tomorrow. Both DC characters Kendra Saunders and Carter Hall will star in the series, and from what we've seen and heard so far, prepare for their journey to get bumpy. They are ancient warriors who are tied together by destiny and get reincarnated throughout history. However, in Kendra's case, she isn't always up to speed and Carter has to be her guide.

"It's a bit jarring when you meet someone for the first time and they say they're your reincarnated lover from 4000 years ago," said Renée. Yeah, I can see how that could get awkward. It checks out. She said that because of this, Carter is simultaneously Kendra's biggest ally and biggest pain on Team Legends. They can also both fly. Did I mention that? The actress also said that we'd meet Hawkgirl first on The Flash (technically, we already saw a tiny glimpse of her in the finale) in Season 2 when she first moves to Central City and "has no idea what's going on." She has to figure out who she is as a human being first before getting to her epic past and kickass powers. "She finds out that she's a little bit more than [human]," Renée said. In the comics, Kendra Saunders was also a treasure hunter, which could be handy on a team with such an epic purpose. Carter, on the other hand, is an Egyptian prince. No big deal.

The panel teased that there would be a lot of potential for shipping on Legends of Tomorrow, as is to be expected when a group of passionate individuals are working in close quarters. Just to refresh, Team Legends also includes Professor Stein, Ray Palmer, Leonard Snart, Mick Rory, and Sara Lance — all characters we know from The Flash and Arrow. Executive producer Phil Klemmer talked about the freedom that this show's premise gives them — "we're taking this crazy collection of people who never breath the same air, forget about having to be on a time traveling spaceship together." They are a team that shouldn't be a team, even more so than Marvel's Avengers as they include two villains and a girl who came back from the dead. Or, as Arthur Darvill (who plays their time-traveling ringleader Rip Hunter) put it, they are a "ragbag team of nut-cases." Yeah, that's pretty much accurate.

I think executive producer Klemmer summarized the team's well when he said in the panel that Rip Hunter assembled them to save the world, but "he thought it was going to be one episode and not 16." The fact that they have to work together beyond the single mission helps to escalate all of those tensions. The fact that Hawkgirl and Hawkman have such a complicated romantic history built into the fabric of their characters will make it even more delicious to get into when DC's Legends of Tomorrow premieres.