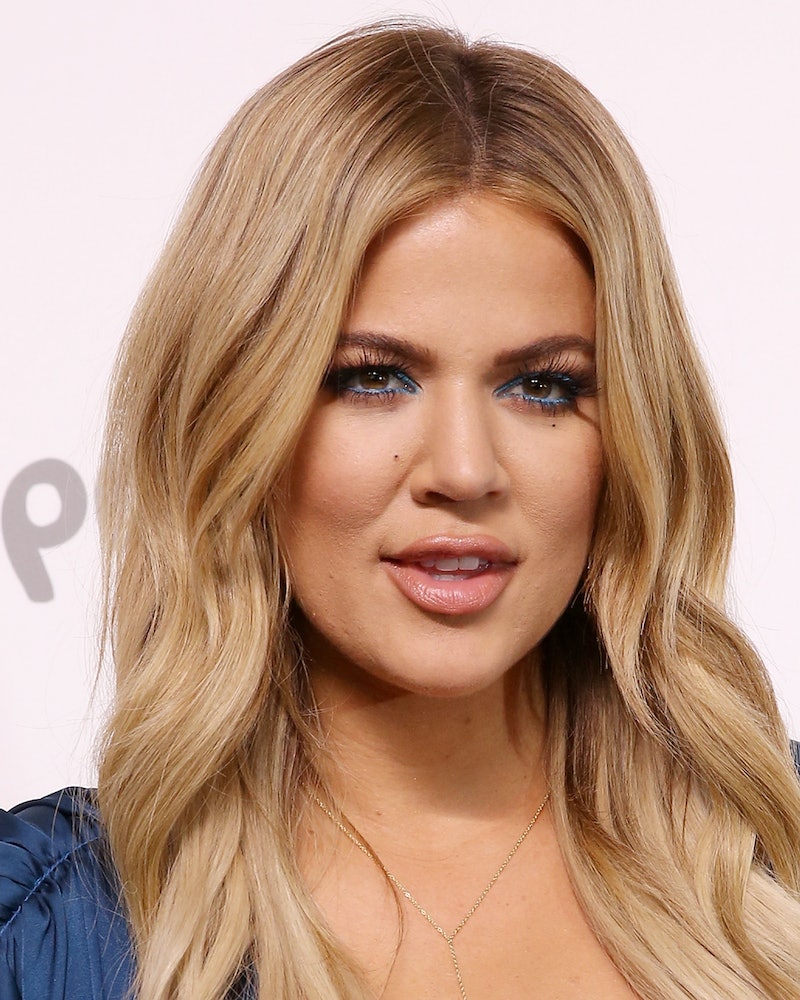 If the Kardashian and Jenner family is willing to put themselves out there every week and open up their lives for public consumption, you might say they should also be equipped to handle criticism, no matter how harsh. But, at the end of the day, they're human and Khloé Kardashian, known as the most outspoken of the ladies, isn't above letting someone know her feelings have been hurt by something that was said. On Sunday, Kardashian tweeted about her personal weight loss journey, but did so in a way that might make you question why she sounds so defensive. And, given the publicity Amy Schumer is receiving for her Kardashian jokes on Saturday Night Live this past weekend, you might not be wrong to assume the 31-year-old's message is directed at the comedian.

During her monologue, Schumer lamented the fact that young women seem to have few good female role models and used the Kardashians as a prime example of that. While poking fun at the famous family, she said,

A whole family of women who take the faces they were born with as a light suggestion. We used to have Khloé. Khloé was ours, right? Khloé, she lost half her body weight. She lost a Kendall, and we have nothing.

Coincidentally or not, Kardashian tweeted this message not long after the SNL episode aired:

And she continued to reinforce her message with this tweet:

Granted, she didn't call Schumer out, but come on now. There's little doubt in my mind that the Trainwreck star's monologue hit a nerve for the reality star, especially given how proud she is of her weight loss and commitment to living a healthy, fit lifestyle. Kardashian told Complex magazine she always knew people thought of her as the "fat, funny one" and that she would beat them to the punch by making jokes about herself before anyone could bring her down first. It sounds like she is finally happy with herself and doesn't now want to be slammed for that, too. At this point, she probably feels like she can't win either way.

I love Schumer and will defend her right to find humor in all areas of life, because I feel it would be sad to take weight so seriously you feel you have to censor yourself about it. Especially because Schumer herself has been outspoken about her own weight and the fact that she doesn’t attach too much meaning to the number on the scale.

But it's difficult to deny that Kardashian's tweet isn't about Schumer's joke and that the 31-year-old wasn't hurt by the actress' comment — and I say hurt, not angered, because she kept mum on the source of her frustration, most likely because she has zero desire to start a feud with Schumer. All in favor of these two becoming buddies and putting this past them, say "aye."

Yeah, I can't picture it either...

More like this
Khloé Kardashian Set The Record Straight On A New Dating Rumor
By Grace Wehniainen
Khloé Kardashian Is Reportedly Dating A Private Equity Investor She Met Through Kim
By Jordyn Tilchen
Tanya Burr Is Expecting A Baby With Her Mystery Partner
By Maxine Harrison
Adele’s All-Female Lineup Includes Kacey Musgraves, Mahalia, & Self Esteem
By Shahed Ezaydi
Get Even More From Bustle — Sign Up For The Newsletter