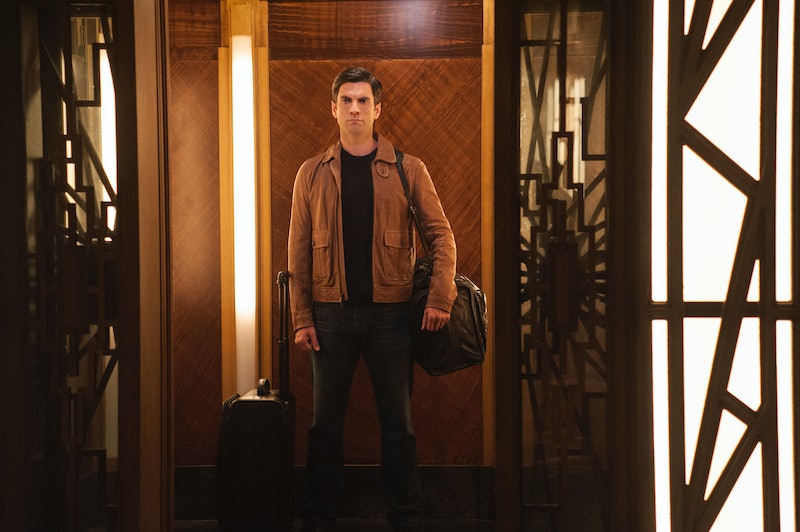 We've only been checked into the Hotel Cortez for one week and already it's clear that this resort is loaded with mystery (not to mention some very questionable mattresses). But out of all the burning questions we have about American Horror Story: Hotel , there's one thing in particular that has remained at the forefront of my mind: figuring out the identity of AHS Hotel 's 10 Commandments Killer. Who is this mystery person and how is he/she connected to the hotel itself? In the premiere, Det. John Lowe received a call from the killer, prompting him to visit Room 64 of the Cortez. And while no harm came to John (this time at least), we have to assume the killer led him there for a reason. Why? Perhaps it's because that's where our murderer calls home.

In a recent interview with Entertainment Weekly, Ryan Murphy divulged that The Countess has ties to the Ten Commandments Killer since they share the same stomping grounds. "Everyone is tied to the Ten Commandments Killer," Murphy revealed. "The great fun is, 'Who among them is that killer?' It’s obviously someone who’s staying in the hotel." Granted, this clue (as interesting as it is) doesn't exactly narrow down the suspect list too much, considering that everyone is pretty much living in the hotel at this point. But it's still a helpful piece of information to know nonetheless. So who among these residents has a knack for making killer religious tableaus? Check out who I've listed as the most likely candidates below.

We have yet to be introduced to this character, but given that he was the original owner of the hotel, I have a feeling his past may hold the most darkest and deepest of secrets. In fact, Mr. March is actually based on a real life hotel owner who lured unsuspecting tourists to their death. Perhaps this is AHS' take on such an infamous moment in history. As of now, Mr. March is only appearing in flashback form, which gives the impression that he's been dead for quite some time. But since when has being dead ever stopped someone from committing murderous deeds? Mr. March could be one of the ghosts that haunts the hotel, who's somehow managed to find loophole that allows him to leave the premises. Or, maybe he — much like The Countess — figured out how to combat the aging process and has been living in secret within the confines of the Cortez, just waiting for the perfect opportunity to strike.

If Misery has taught us anything (other than the fact that it loves company), it's that we should always fear Kathy Bates. And her portrayal of Iris is no exception. This woman may rule the Cortez with an iron fist, but she's also first and foremost a mother. As the premiere indicated, Iris is not running this hotel by choice. Something tells me that some sort of deal was struck on the day her son Donovan almost died (or maybe did die) of drug overdose. Maybe The Countess agreed to save him if Iris gave up her soul in return. An arrangement like that is bound to send anyone over the edge after a while. Perhaps going on a murderous rampage is Iris' way of reestablishing some control over her life.

Is it just me or does this maid seem a little too comfortable (and familiar) with getting blood out of bedsheets? Maybe the hotel demons aren't the only ones she's cleaning up after.

Don't let the friendly demeanor fool you — this cross-dressing bartender may have more juicy secrets in the closet than anyone. Plus, Liz Taylor just comes across as way too innocent, which is always a tell-tale sign that there's more to this character than meets the eye.

Then again, maybe the answer is right in front of us. Thanks to her little movie outing with Donovan last week, we know that The Countess is able to leave the hotel, which means she isn't a ghostly figure like some of the others. Perhaps her taste for blood extends far beyond just her palate, thus making her the No. 1 suspect in these horrific murders. (Maybe she even called the first tableau: "Bad Romance.")

Someone We Have Yet To Meet

Just because Murphy said that the killer is a guest at the hotel doesn't necessarily mean we know who exactly they are yet. (Like that "thing in Room 33.") So until we're introduced to all of the hotel creatures that go bump in the night, our list of candidates can only go so far. At this point, it could be anyone… even one of us.