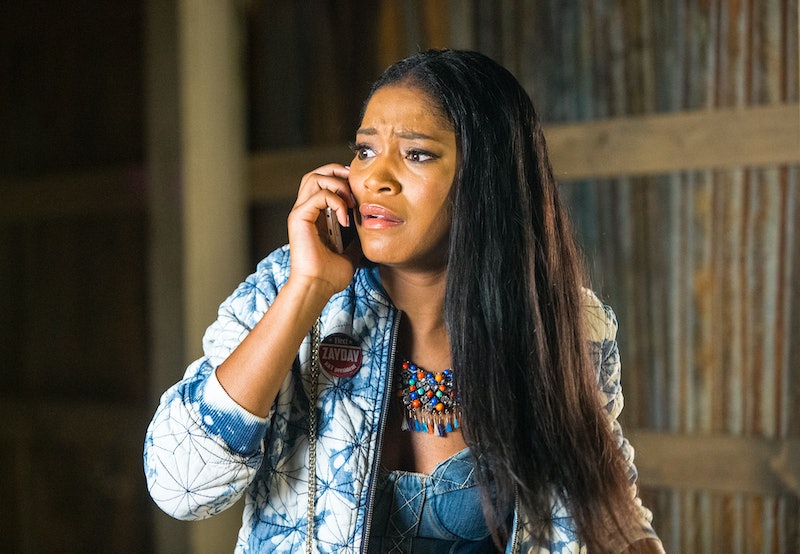 Well, well, well. What do we have here? Something smells funky, and it's not just all of the rotting bodies in Zayday's haunted house. You might be wondering what happened to Zayday on Scream Queens . Well, the once promising future president of Kappa was kidnapped by the Red Devil. So, can someone explain to me how Zayday was basically asking to become the Red Devil's newest victim by hosting a haunted house while a serial killer was running rampant, but ended up just getting kidnapped? Kidnapped. Which is the equivalent of being in a 20 person group text in the Scream Queens world. Like, it's bad... but it could be a lot worse*.

I have been a bit suspicious of Zayday since Day 1. And no, not because she tweets at Shonda Rhimes about How to Get Away with Murder(because in that case, lock me up). Zayday joined Kappa because Grace, her roommate, "convinced her" to. It's kind of a classic, cliche trope of sorority films/TV shows — but Zayday really didn't protest too much to joining Kappa. Could this mean she has a reason for wanting to get involved in the sorority — like, murderous reasons? Or is this really so she can run for president and build her resume for her post-college dreams?

When Zayday was kidnapped by the Red Devil during her haunted house, all of the alarms in my head went off thinking, OK, this girl is definitely involved in some way. And Keke Palmer, Zayday herself, basically agrees. When asked by Variety if fans should be suspicious that she was kidnapped and not killed, Palmer said, "If I were you, I would be. I’d be very suspicious that I’ve been kidnapped and not killed. Because he’s killed everybody. Everyone he’s killed, they’ve been gone quickly."

OK. So, let's follow Palmer's lead and be suspicious. What could it mean that Zayday was kidnapped and not killed? Let's map out her possible involvement.

Like Palmer says above, it's extremely suspect that Zayday wasn't killed right away by the Red Devil. Is he keeping her alive to torture her? Or did he spare her because they're working together in some way?

She Joins Others Who Weren't Killed, But Are Somehow Involved

She Wants To Take Chanel Down

Zayday wants to become the next Kappa president. She says it is for her future, but it seems like it's largely aimed at Chanel Oberlin's terrible reign. Maybe Zayday has found a way to sabotage Chanel's presidency by having everyone around her die.

She's Handy With A Chainsaw

I want to be wrong about Zayday, I really do, but the girl literally sleeps with a chainsaw. And we're supposed to pretend like that's normal? Mmm — no.

* You're head could be mowed off while being buried underground like a shrub.