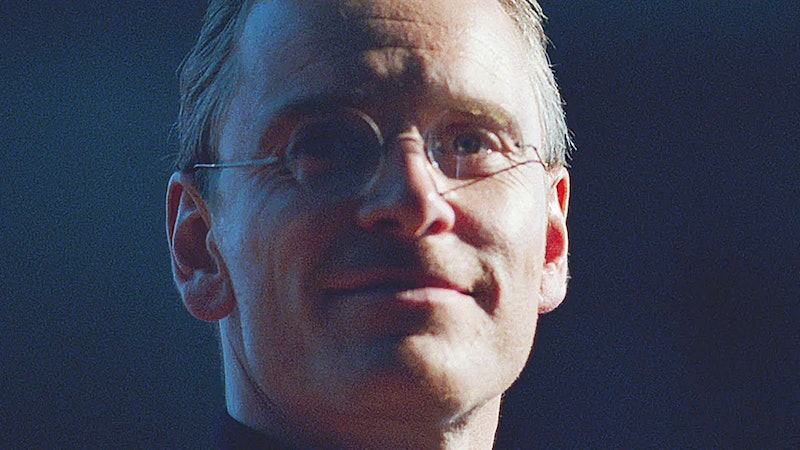 Arguably one of the most influential men of our generation, Steve Jobs has been the subject of more than a few films over the past decade. And now, filmmaker Danny Boyle is tackling the legend with the help of Newsroom writer Aaron Sorkin in 2015's Steve Jobs . The film has made headlines for its unconventional story telling, a narrative split distinctly in three parts, taking place before three separate product launches during Jobs' career. It reads almost like a stage play. "If you're gonna do him, it would be a great shame to do him in a very conventional way," Danny Boyle says. "He's not that. He wanted people to think outside the box. Think different. He would delight in unorthodox thinking."

Michael Fassbender, who arguably looks nothing like the man himself, takes on the titular role. But instead of covering Fassbender's angular face in prosthetics and makeup, Boyle decided to build Fassbender as Jobs from the inside out. Sure, Fassbender had brown contacts put in, but this was only to match the eye color of the three actors they cast to play Jobs' daughter, Lisa. And they did change his hair, but only slightly, a little gray coloring here and there to indicate aging.

"I did a movie called 127 Hours, and we cast James Franco as Aaron Ralston. And James doesn't look anything like Aaron Ralston. I mean, nothing like him at all. But we cast him, and by the end, Franco did look like him, weirdly," the Slumdog Millionaire director explains. "Jobs is the same. We didn't worry about prosthetics or camera angles. When you've got a good script, and a great actor, one of the things that happens is that slowly morph into them. They weirdly became one in a way. The actor is free to work from the inside out, rather than the other way around."

While fairly unexplored in other Steve Jobs iterations or documentaries, Lisa Brennan-Jobs is a colossal part of Sorkin's screenplay. Brennan-Jobs, who is the product of father Steve and mother Chrisann Brennan, declined to be interviewed for the Walter Isaacson biography for which the movie is based. "She did not want to be drawn into anything controversial between her father and her mother," Boyle explains. "But after his passing she decided that she did want to speak, and she spoke to Aaron Sorkin then. So Aaron had the advantage of a testimony from her, and it became pivotal, not just because Aaron himself is a father of a daughter — I am as well, I have two daughters — but it also gives you a personal insight beyond the gossip, the rivals of products, the industry... something that brings us all to the same place, really. We're all fathers or daughters, or mothers or sons. We can all relate to that on a certain level."

One aspect of Jobs' personal life that has come under intense scrutiny is his reluctance to claim Lisa as his own child, even after a court-ordered DNA drug test suggested him to be the father. "The way he refused to acknowledge his daughter initially brings him to task. It's a flaw. We like those in drama because they humanize people, I think," the 58-year-old says. "I think it's wonderful she confronts him in the third act, she's the one who can nail him better than anyone. She's a chip off the old block."

Boyle had the opportunity to meet the real life Brennan-Jobs before they began shooting, and Boyle offered her an open invitation to swing by set anytime, meet the actors, watch them shoot — whatever. But as Boyle recalls, Brennan-Jobs was still hesitant. "She said, ''This is very difficult for me. I don't want to become part of the marketing of the film.' It is a very personal experience for her. So she came to the New York premiere, and she was about to watch it, and she decided not to at the last minute!" Boyle reveals. "She came to the after party, and she was pleased that people seemed to appreciate it. I'm sure she'll catch it on her own in private somewhere, sometime, and God bless her for it."

The film showcases the tumultuous relationship between Jobs and Lisa's mother, Chrisann Brennan. We see a moment where she begs for child support, begs Jobs' to acknowledge the daughter the court claims is his. "He had such a varied, complicated relationship with those nearest and dearest to him, and those are the ones that Aaron selects as characters in the film, and those are the ones we focus on. Steve would be the first to acknowledge that he was a complex and contradictory character," Boyle says.

Luckily, Michael Fassbender was up to the challenge of portraying the many varied colors of Steve Jobs. "What's wonderful about Fassbender's performance is that Michael is an uncompromising actor. He is his own man, and in that way he's very Jobsian," he says. "He didn't learn the script the way that actors normally learn a script — he absorbed it. When we shooting he never had a script. I never saw him with sides, and yet he was absolutely accurate. Pin-point accurate. He had absorbed it in away almost as if he had ownership of it, as if he had written it."

Those who have seen an Aaron Sorkin television show or film know that the man doesn't take dialogue lightly. Monologues that are pages long are not at all unthinkable in a Sorkin picture, so Danny knew he had to arm himself with actors up for the challenge. "With the demanding dialogue that Sorkin writes, you have to own it, otherwise it owns you. You feel like a mouthpiece for Aaron Sorkin. As dazzling as that is, it's not satisfying on a true, dramatic, emotional level. Jeff Daniels has worked with Sorkin before so he knew, and in fact he gave lots of good advice to the others about getting 'Sorkin-ized.'"

Kate Winslet plays Jobs' "work wife" and constant lifeline in the film, but according to Boyle, this close relationship translated off screen as well. "She became [his work wife] on set as well — this incredible support. Obviously the role is a burden, for him as an actor, and she was enormously enabling for him. She's really gifted in her own way, and they made an amazing couple on and off screen."

Seth Rogen came aboard to play the role of Steve Wozniak, the engineer who toiled away in car garages with a hippie Steve Jobs way back when. "Seth is regarded as a great comic actor, but Seth in this was amazing," Boyle says. "Seth just took it on and absolutely nailed it. He doesn't really look like [Steve] Wozniak. OK, he's quite a big guy and he's quite hairy, but he doesn't really look like Woz. But there is something that makes him very Woz like. Woz is an engineering genius, and Seth is a comedy genius. They are both very, very decent men as well."

The film is very clearly an exploration of Jobs himself, but that doesn't mean Boyle, just like Wozniak continuously asking Jobs to recognize the Mac 2 team in the film, didn't want to acknowledge the other engineers and thinkers who played a part in the inception of the computers we use today. Boyle toyed with the idea of naming the film The King of France, as a nod to a particular interface expert.

"Jef Raskin was thrown off the Macintosh project, but Raskin used to say that Steve would have made a very good King of France with his behavior. I think that was a brilliant turn of phrase, because obviously he did behave like an emperor," Boyle says. "That's why we have a very short shot of Napoleon Bonaparte on a horse. That was for Jef Raskin. He's passed away, God bless him, but that was for me to him. There you go, Jeff."