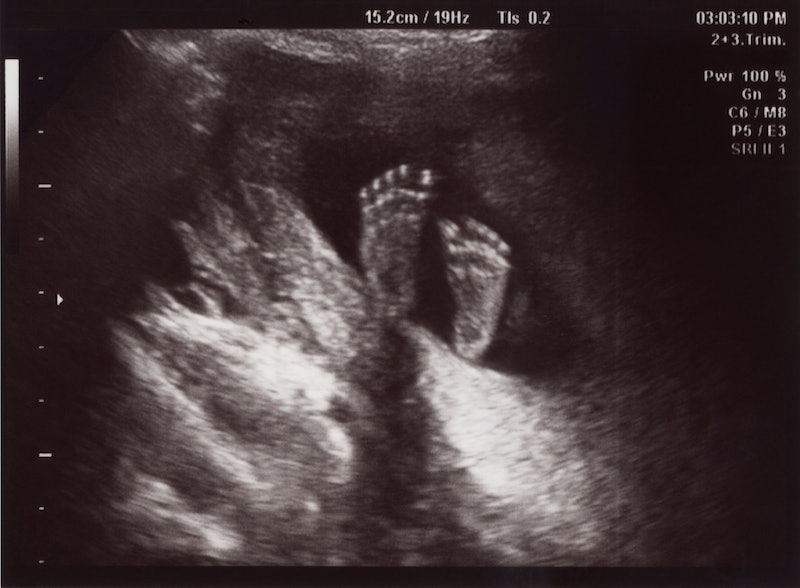 As a woman who recently had a baby, I can personally attest that there are certain things you definitely don't want to hear when you're nine months pregnant — your doctor is out of town, your ankles look huge, or there's no more white cheddar popcorn. Somewhere at the very top of this list would be learning that your baby is possibly too big, a situation called "suspected macrosomia." But a new study suggests that women can keep their hands off the panic button if they're given this news. Only one in five of the women told their baby might be too big actually went on to deliver a big baby, according to the Boston University study, which was published recently in the Maternal and Child Health Journal. As for what was "too big"? That was defined as 8 lbs., 13 oz., which is a typical definition for macrosomia.

During their research, study authors examined data from 1,960 deliveries taking place between July 2011 and June 2012, and concluded that their findings "underscore the challenge of determining fetal size prenatally." Yet despite this tenuous correlation between suspected macrosomia and actual macrosomia, the study also found that if a woman is diagnosed with suspected macrosomia, this affects her pregnancy and childbirth-related health care. Women with suspected large babies were more likely to have their labors induced with labor-inducing drugs like pitocin. They were also more likely to try to self-induce labor, to receive an epidural, and to request a planned C-section.

It's somewhat surprising that in our high-tech world, we still can't figure out how big a baby is. And it turns out that the higher-tech the method of estimating the baby's size is, the less accurate the results tend to be. Ultrasound images are off by an average of between 11.6 to 19.4 ounces, according to a 2001 University of Michigan Medical School study, while determining fetal size by the old-fashioned method of feeling the mother's stomach produces estimates that are off by an average of 11.6 ounces.

It's not difficult to imagine why a woman is more likely to want a C-section if she thinks she's carrying a giant baby in there. After all, big baby equals big head. Yikes. Turns out, though, that making decisions based on the suspected size of the baby might prove unwise, not just because doctors can't actually tell how big the baby really is, but also because even if the baby is big, inducing labor or getting a C-section doesn't necessarily improve health outcomes for mom and baby. In fact, a 2002 meta-analysis published in Obstetrics and Gynecology concluded that "labor induction for suspected fetal macrosomia results in an increased cesarean delivery rate without improving perinatal outcomes." Similarly, a 2011 study found "no evidence of improved outcomes following induction of labor for non‐diabetic women who are thought to be carrying large babies."

In other words, suspecting a large baby isn't always a good reason to induce a labor or have a C-section. Even if the baby is too big, which it very well might not be, trying to intervene might not improve health outcomes anyway. There are specific circumstances, though, where a baby who's suspected of being bigger is more likely to cause problems during delivery. (Things like whether the mother is diabetic, has a small pelvis, or had a previous childbirth with shoulder dystocia, which is when the baby's shoulder gets stuck.)

Scary as the word "macrosomia" may sound, a full 15 percent of babies weigh more than 8 lbs., 13 oz. at birth, according to a 2013 Harvard study, so macrosomia is actually totally and completely normal. Still, hearing those words "big baby" might put an expectant mom in a frame of mind that puts a new spin on the word "expecting" and makes her feel a bit like this little guy here: