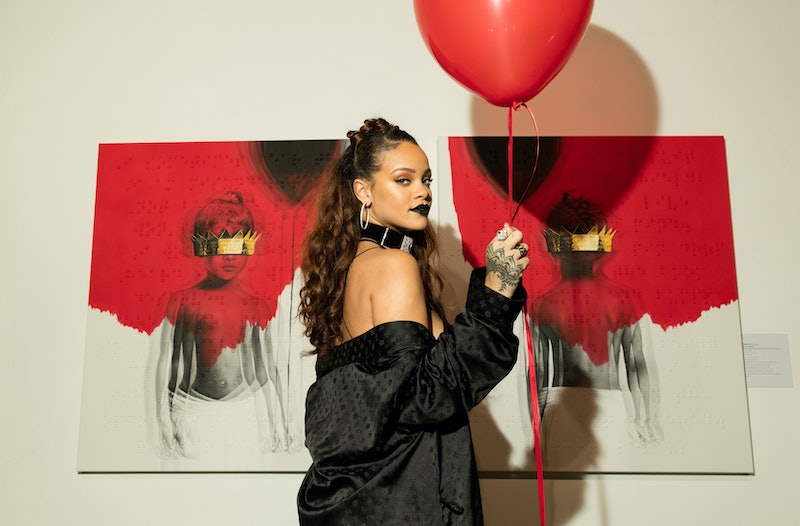 I don't know about you, but it makes perfect sense that T Magazine 's "The Greats" issue features Rihanna wearing a septum ring. The singer landed one of six covers for the New York Times publication, which honored her alongside Karl Lagerfeld, Quentin Tarantino, Jonathan Franzen, Elizabeth Holmes, and Steve McQueen. The issue was unveiled less than a week after Rihanna revealed her Anti album cover, so she's already on track to reclaim 2015 as another banner year for her already illustrious career. But isn't that what makes an artist into one of "The Greats" after all?

Looking as fierce as ever in her T Magazine shoot, Rihanna's piercing on her septum and on both ears are on full display. While the look is definitely striking, this isn't the first time that the pop star has worn jewelry between her nostrils. Rih wore a fake septum piercing at her brother's album release party last year. Her makeup for the magazine's cover is edgy and strong, highlighted by her on fleek brows and pale pink lips. Craig McDean, who previously worked with the singer for her Dior ad campaign, photographed her in a Gucci top and Jacquemus jacket.

The issue also includes a candid interview between Rihanna and filmmaker/artist Miranda July. The two women discussed everything from Google-searching childbirth, to the singer's dating life, to a topic that's close to Rihanna's heart: the perfect Instagram photo.

‘‘There’s no rule about whether you have to be clothed or not," Rihanna said. "I want to see a naked woman who isn’t even aware of her nakedness.’’

Check out the rest of the photos from Rihanna's T Magazine cover story below:

Here are some behind-the-scenes photos of the now BFFs during the interview:

Thinking about getting a septum piercing like Rihanna? Make sure to read Bustle's article on everything you need to know about septum piercings as well as the super handy guide to tell a real or fake septum piercing before making your decision.