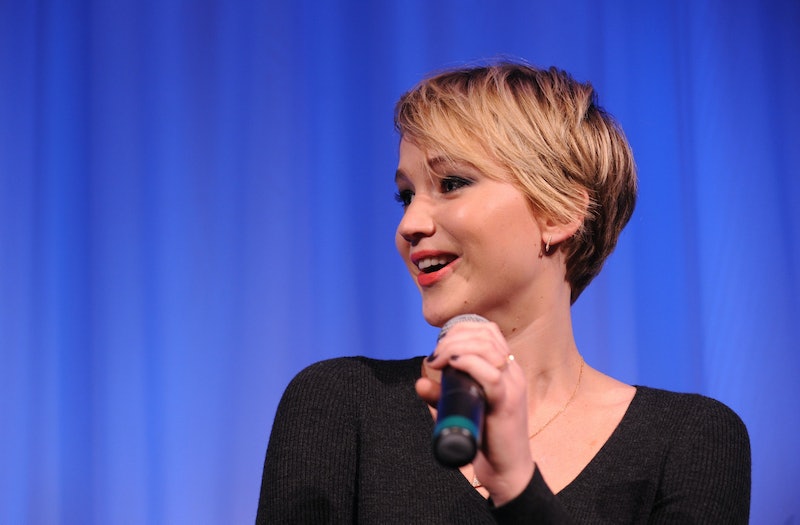 "Ten Reasons Why We Love Jennifer Lawrence More than Our Own Grandmothers." "How Jennifer Lawrence Took Over Hollywood." "I Love J-Law So Much I'd Pay Her to Use My Hair as Toilet Paper." (Oops, kidding on the last one, but it might as well be real). All right, internet. Reel it in, would you? I am not here to stand for Jennifer Lawrence, which I guess makes it just me and Joan Rivers. But that's ok with me. On the eve of 2014, Lawrence was named The Entertainer of the Year by the Associated Press, and it just really grinds my gears. (Although 2nd runner-up was Miley Cyrus and the 3rd was Netflix so this was clearly a "most influential" type thing, but still).

Is there anything the Internet loved more this year than Jennifer Lawrence? I just can't sign on to follow Lawrence off a cliff. I don't despise her the way Joan Rivers does, but I'm not fanning myself over her, either.

While I do think Lawrence is a talented actress, she's problematic in many ways that get ignored because she's "funny and quirky" and "clumsy" and "likes to eat food." I like to do all that crap, too. Nobody is making GIFs of me falling up stairs. The danger with making her out to be a Groundbreaking Role Model is that it creates hesitation to call her out when she is offensive or exclusionary. This brilliant tumblr Your Fave is Problematic earlier this year chronicled some reasons we shouldn't mythify Lawrence; perhaps most because she has expressed unsavory and ignorant opinions about gender and mental illness, among other missteps.

Her first strike for me was in 2011, when she told Jesse Eisenberg re: his OCD on The Tonight Show with Jay Leno: "You're the most interesting person, I want weird quirks." As someone who suffers from a mental illness, I am HORRIFIED that there is still the stigma that these illnesses and anxiety are somehow seen as enviable by mentally healthy people. They are not quirky—they are debilitating. And this after Lawrence starred in (and won an Oscar for) Silver Linings Playbook, wherein she played a character that grappled with mental illness.

On Ellen last November, about her new cat, Chaz Bono:

“I’ve never met a cat where you assume first that it’s a boy. Because normally dogs are boys and cats are girls. But she has such a masculine energy that everybody always says ‘he’ and for the first week I thought it was a boy. I named her Oliver, she had a collar with Oliver. And like “boy, boy, boy.” And everyone’s like, “what’s his name?” And that’s just weird for a cat. So we call her Chaz Bono."

The fuck is this about gendered energies? Maybe having that thought when you're five is cute, but not even really, then. Ellen DeGeneres is visibly uncomfortable.

On a personal level, I am tired of the "cool girl" epic that surrounds Lawrence because I know it would be impossible for a WOC celeb to achieve such lauded status. Lawrence is all right, but if she keeps getting praises and free passes for her problematic opinions, she could turn sour. There are other women to watch in 2014.

More like this
J.Lo Uses They/Them Pronouns To Introduce Her Child Emme For A Special Duet
By Jake Viswanath
J.Lo Calls Ben Affleck “The Most Consistent & Selfless” Dad On Father's Day
By Jake Viswanath
Tanya Burr Is Expecting A Baby With Her Mystery Partner
By Maxine Harrison
Adele’s All-Female Lineup Includes Kacey Musgraves, Mahalia, & Self Esteem
By Shahed Ezaydi
Get Even More From Bustle — Sign Up For The Newsletter