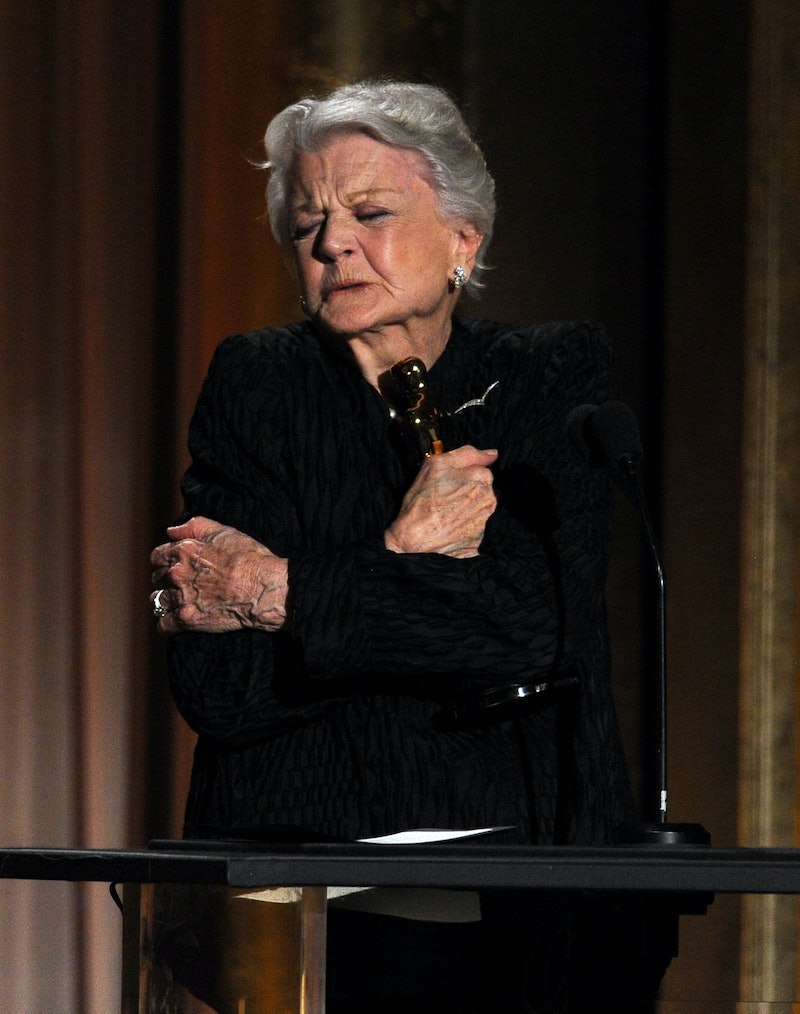 All hail, the dame? Angela Lansbury has become the equivalent of a female knight, also known as a dame, in the British Empire. The Bedknobs and Broomsticks (oh yeah: she was also in Murder, She Wrote — hopefully this will give her something to worry about that isn't the reboot of the series — and a billion other things during her impressive career) actor has been feted with the honor by the Order of the British Empire for her contributions to philanthropic efforts outside of her incredibly prestigious career. All hail Dame Lansbury!

The highly prized honor (or honour if you're feeling particularly British) is typically awarded to those who've made "a major contribution in any activity, usually at national level. Other people working in the nominee’s area will see their contribution as inspirational and significant, requiring commitment over a long period of time." Lansbury was named a Dame Commander of the Order of the British Empire in the Diplomatic and Overseas List of the 2014 New Year Honours. When asked about the distinction by the BBC, she stated: "It's a lovely thing to be given that nod of approval by your own country and I really cherish it."

Now, at long last, Lansbury can attend the secret tea time meetings we're convinced the Hollywood dames all gather for. Like Maggie Smith, Shirley Bassey, Julie Andrews, Helen Mirren, Diana Rigg, and Judi Dench. I bet they even have Jane Goodall over from time to time, too.

As for the reasoning behind the honor (as if it needed to be spelled out; all they really needed to say was "because she's Angela motherfucking Lansbury" but I understand the British's need for decorum above all else), a statement released at the time of the announcement states it thusly:

Angela Lansbury Shaw has worked tirelessly carrying out extensive and wide-ranging charitable, voluntary and philanthropic work over many years to support organizations helping to improve the lives of many people. With selfless determination and generosity of spirit she has willingly lent her prominence and popularity, raising large sums of money for numerous charities including scholarships for young students and support for medical research. An accomplished actress, Angela Lansbury is well-known for her long and successful acting career and many achievements in the entertainment industry where she has repeatedly given back and helped others, including working with younger people to inspire the next generation of actors.

One can only hope that we all are allowed to enter a new year as a dame, y'all. Dream big.