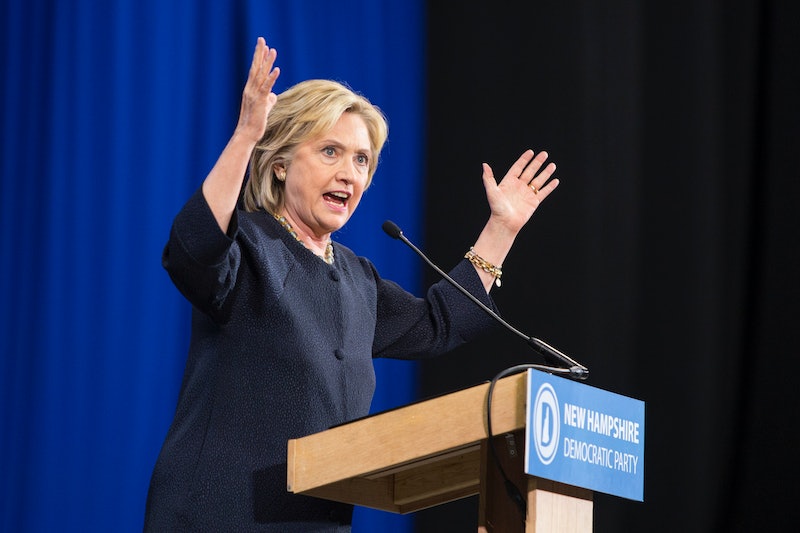 The first one hasn't even happened yet, and we're already wondering when the next Democratic debate will be. The first debate, which takes place Tuesday, Oct. 13, in Las Vegas, will be the first of six primary debates held throughout 2015 and 2016. And while the excitement over Tuesday's debate is palpable, the next debate holds something we all desperately want: the answer to whether or not Vice President Joe Biden will be running for president.

The next debate, which will take place almost exactly one month later on Nov. 14, will be hosted at Drake University in Des Moines, Iowa. It's a high distinction for the university, which has hosted a debate during every presidential election cycle since 2007. The event will be one of the two primary debates hosted in Iowa this cycle — the Republicans will meet up there in January 2016.

Unlike the first three primary debates, the Iowa debate will be hosted by CBS News, which will provide a new change in the debate process. Currently, Fox News has hosted one GOP debate, and with Tuesday, CNN has now hosted two, one from each side of the aisle. And although CNN will host at least two more, having a new organization take over the debate will hopefully result in a fresh approach. Hosting the Democratic debate will also allow the news organization to have a dry run before taking on the bloated Republican field when they sponsor the Republican primary candidates in February 2016.

By the time the Democratic candidates appear on stage in Iowa, the field will finally be completed. Although it seems like the primary campaigns have been going on for months, the ball is still up in the air as to whether Biden will run — but the clock is running out for him to join. Although he'll be missing the first debate, he's unlikely to skip the second one as well, if he chooses to go for the Oval Office.

And if Biden hasn't decided by Nov. 14, then he definitely won't be running. Although primary filing deadlines vary from state to state, according to MSNBC, some states such as Alabama and Arkansas have them as early as the beginning of November. Missing those filing deadlines would result in being ineligible to be on those states' ballots — something no sane politician will be willing to risk.

Biden may not be the only candidate who can't be guaranteed upon to take part in the November debates. Although frontrunner Hillary Clinton and Bernie Sanders are almost guaranteed to be there, lower polling candidates such as Martin O'Malley, Jim Webb, and Lincoln Chafee may drop out by then. Depending on how they fare during the first Democratic debate, their campaigns could be made or broken by their early performance. If one of the three — who are barely polling in the single digits — stumbles during the debate, it could practically be a death sentence.

But a lot is up in the air. With a small field, candidates are likely to hang in longer. And with limited debates, lower polling candidates will be thankful for the exposure that comes with them. But one thing is sure: by the time the Democrats meet up again, there will have been three Republican debates completed already — which means there will be plenty of issues to discuss.

More like this
Think You’ve Tried Every Seltzer Flavor Out There? Think Again
By BDG Commerce
Prince William Condemns “Unacceptable” Comments Made To A Black Guest At Buckingham Palace
By Shahed Ezaydi
Matt Hancock Broke a Major Rule With I’m A Celeb
By El Hunt
What To Know About Martin Bashir After Watching 'The Crown'
By Bustle UK
Get Even More From Bustle — Sign Up For The Newsletter