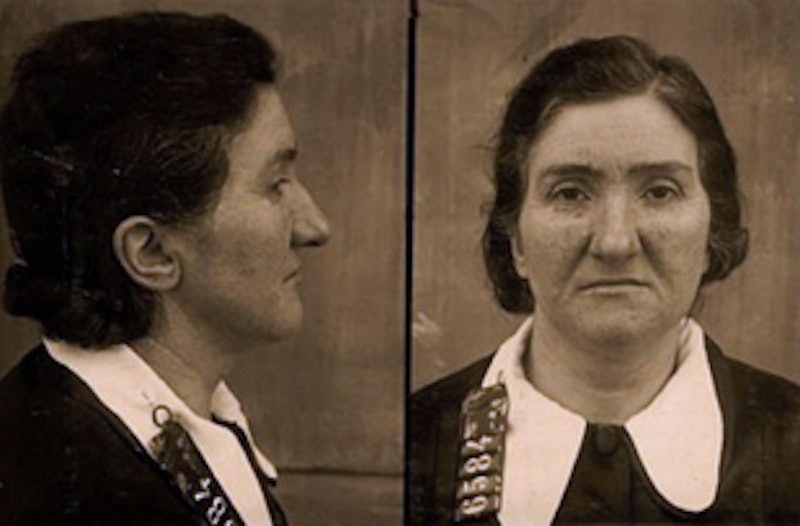 The internet has made the celebrity mugshot so ubiquitous, it's hard to imagine that criminal mugshots are actually a fairly new thing. But they are — the idea of using photographs to create a visual record of criminals who'd come in for processing first became part of standard police procedure in France in 1888. Before that, members of the public who wanted a glimpse of the latest press-grabbing offender had to rely on illustrations in the papers, or go and visit the prison themselves. Hardly my idea of a fun Sunday afternoon outing.

The six historical mugshots below show that while mugshots are a fairly recent invention, creepy criminals are not. These mugshots — which document not just some of the earliest famous mugshots, but also some of the most terrifying serial killers of the late nineteenth and early twentieth century — represent the first time that average Americans were able to put a real face to the act of serial killing. Police and historians only really began to identify certain criminals as serial killers in the nineteenth century, so these photos were likely the general public's first visual confirmation that accused and convicted serial killers could look your next door neighbor. Scroll through the six photos below, and remember: technology changes, but evil stays pretty much the same.

The bowler-hatted Dr. H. H. Holmes' mugshot is thoroughly notable — not just for his exemplary old-timey mustache but for the fact that it commemorates what was probably America's first serial killer. Holmes is famous for being crazy in a way that most of us can barely imagine — and for being so prolifically devoted to his murdering that he actually built a a special house to do it in. Holmes built a hotel in Chicago just in time for the 1893 World's Fair — except that Holmes' hotel was less a place to spend the night and more a specially engineered death trap, complete with dungeons, hallways to nowhere and acid pits for disposing of his victims.

The man was a swindler and bigamist, but he's now mostly remembered for his pioneering contribution to the idea of murderous architecture — and for leaving a lasting mark on popular culture. Holmes was the subject of the book The Devil in the White City, he is considered to be an inspiration for Evan Peters' Mr. March on American Horror Story: Hotel , and he will be played by Leonardo DiCaprio in Martin Scorcese's upcoming film about the killer (so leave your Titanic fantasies at the door for that one).

We still have no idea how many people the mustachioed Holmes did away with in his mansion in Chicago — he confessed to 27 killings, but police thought him responsible for many more. But no matter the actual number of crimes he committed, this mugshot certainly leaves a bit of a mark on the soul. He's probably wondering which room he should put you in...

Leonarda Cianciulli is a folklorish figure in her native Italy for being the kind of serial murderer you don't think you'll encounter outside of mystery novels. Cianculli killed three women between 1939 and 1940, which doesn't sound that shocking at first...until you see that she killed them because she believed she was making human sacrifices to ensure the safety of her oldest son, who was fighting in World War II. Cianculli boiled the three "human sacrifices" down to make their body fat into soap, earning her the nickname "Soap-Maker of Correggio." She somehow made her victims' blood into teacakes, which she, her husband and visitors ate. It's hard to get all that across in a photo, of course...but dang, this mugshot comes close.

Joseph Vacher's mugshot is distinguished by his trademark rabbit-fur hat, which the French serial murderer wore everywhere — including to his own arraignment. But he wasn't just a fashion plate — he was also an accomplished accordion player, and, oh yeah, he also rivalled England's Jack The Ripper as one of the century's most prolific serial killers.

Vacher seems to have started out as a singularly incompetent murderer; he tried to kill a maid who rejected his advances and then himself, but both survived. However, from this abject failure he became one of the terrors of France, murdering up to 11 women. He would have gotten away with it, too — if he hadn't kindly admitted all of his crimes to a policeman who was arresting him for his last attempt. Apparently, despite all the experience he picked up, he was still pretty awful at his chosen profession.

Manuel Blanco Romasanta's mugshot is, you'll notice, more of an anatomical study than an identifying photo — and for a very good reason. Romasanta was actually acquitted for murder so that he could be sent for anatomical study. Why? He had put forward the (apparently very convincing at the time) defense that he committed thirteen murders while suffering from the unfortunate condition of being a werewolf. He admitted to all of his crimes, but the idea of a werewolf-murderer so alarmed the Spanish Crown that his sentence was commuted so that he could be examined as part of a medical study.

However, Romasanta turned out to be a rather terrible werewolf. When commanded to transform in court, he said that he couldn't, as the curse that had made him into a wolfman had conveniently expired before the trial began. The rumour that he made his victims' body fat into soap appears, however, to be false.

Mary Ann Cotton was a British woman whose mugshot seems to register some surprise at being arrested — though the idea that Cotton would be shocked about being apprehended is fairly far-fetched, considering that she managed, in an incredibly short period, to murder three of her own husbands, two boyfriends, and 11 of her own children. She's noted as one of the first female serial killers in British history, although her methods — arsenic poisoning, chiefly — seem a bit quaint in comparison to werewolf frenzy and human teacakes.

Cotton became a thoroughly terrifying public figure when her case came to trial in 1873 — though she was only being tried for the death of her last son, the press had discovered the unusually "bad luck" that seemed to plague nearly everyone in her family, and Britain was suitably outraged. She became a by-word for wickedness after being found guilty and hung.

Dr. John Bodkin Adams's mugshot is another one which is creepy purely due to its veneer of respectability — because Bodkin Adams, a British physician, is now widely suspected to have been a serial killer. Some historians suspect that Adams may have killed over 150 people in his care, through drugging them to death or other acts of medicine-based maleficence. His 1957 trial was a sensation, involving missing evidence, new judicial precedents and political meddling by government figures. And when Bodkin Adams was acquitted, he had to go into hiding to avoid public retribution.

It's weird that Bodkin Adams isn't known at all today, because in the '50s he was one of the most notorious figures across the world. Because he was acquitted in a thoroughly disorganised trial, however, he's fallen into obscurity. But we still have his mugshot from his brief time in police custody to remember him by — just look at those round glasses and that neat little tie and tell me that you don't feel a shiver.