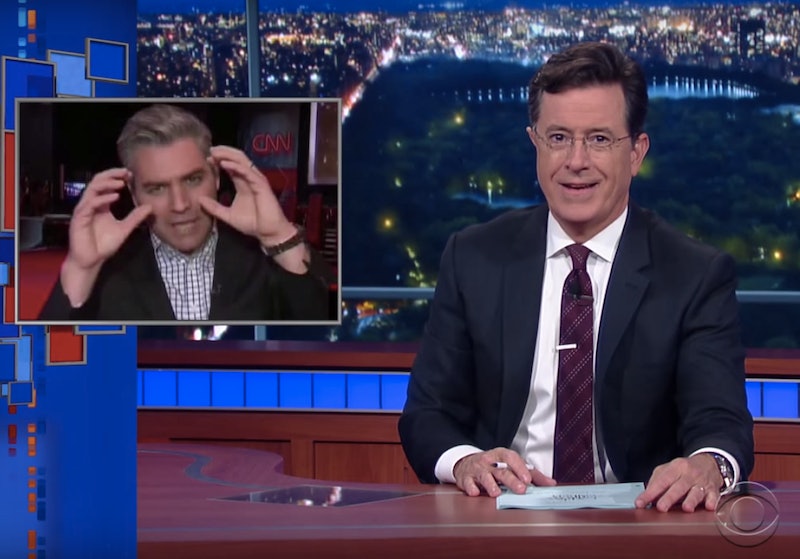 Will he or won't he? That's the question CNN has been driving home for days on whether Joe Biden will show up at Tuesday's Democratic debate, even going so far as to unveiling the podium-in-waiting that'll be ready to go should the Veep make an unexpected appearance. That obsession created perfect fodder for Stephen Colbert on the eve of the first Dem showdown. On Monday, Colbert mocked CNN's nonstop debate coverage of Biden and his possible, though highly improbable, arrival at the Las Vegas event, even going so far as rebranding the network: "CNN: It Could Get Interesting."

In his segment, the unfortunate target turns out to be CNN's Jim Acosta, who, during a live shot, took some liberties with his imagination on what it would be like if Biden decided to show up. Acosta envisions a big "what if" moment and, well, runs with it:

Vice President Joe Biden, will he or won't he? Will the Air Force 2 suddenly start flying this way, start flying westward toward Las Vegas on Tuesday night, a dramatic landing at McCarran International Airport. The speeding motorcade over to the Wynn Hotel, Biden with the aviator glasses put on. ... I could see a situation, John, where he pulls in in that yellow corvette with the aviators on and just says, "Let's do this thing." It'll be fun to watch. It'll be fascinating political television if the vice president decides to join in.

So, as Colbert points out, why stop there with the "breaking, up-to-the-minute fan fiction?"

Could Paul Ryan unexpectedly switch parties, rappel down from the ceiling, and start debating Bernie Sanders? I mean, anybody could theoretically join in. Why not Jesse Ventura, why not Animal from the Muppets, the reunited cast of Family Matters?

Or perhaps a Bizarro world Donald Trump who has a comb-over goatee and wants to round up everybody in Mexico and kick them into the United States?

Colbert ends with his own elaborate vision on what it would be like if Biden shows up on the Late Show set Tuesday — Times Square, pyrotechnics, aviator glasses! — because, after all, there's no chance he'll be at the debate.

But as Colbert says to tune in Tuesday to see whether or not Biden will show up, did I detect a possible hint that a real Uncle Joe cameo might be in the works? Now that, I can't even imagine.

More like this
'Waterloo Road' Is Back, With More Than A Few Familiar Faces
By Sam Ramsden and Vivian Iroanya
Prince William Condemns “Unacceptable” Comments Made To A Black Guest At Buckingham Palace
By Shahed Ezaydi
Matt Hancock Broke a Major Rule With I’m A Celeb
By El Hunt
The 'Kenan & Kel' Reunion On 'SNL' Took A Dramatic Turn, Thanks To Keke Palmer
By Brad Witter
Get Even More From Bustle — Sign Up For The Newsletter