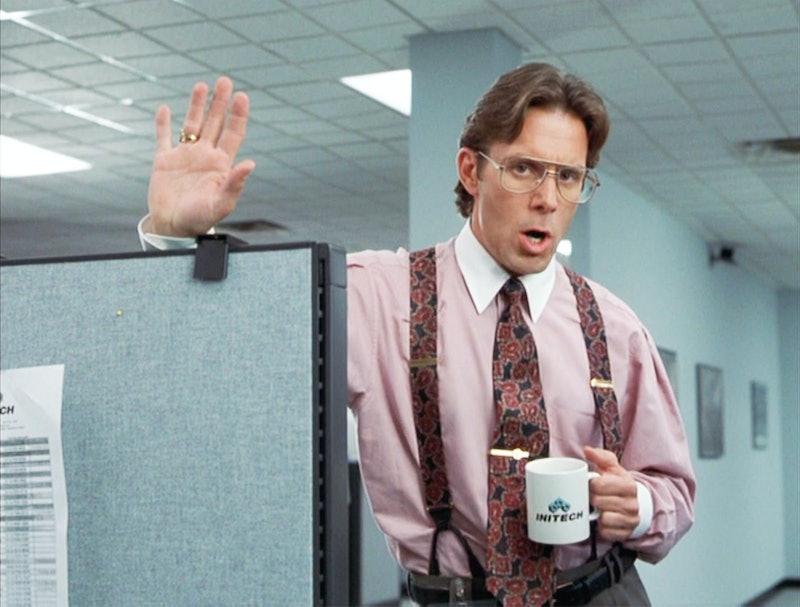 We’ve all dealt with less than stellar coworkers at some point in our lives, people who aren’t good at their jobs, who are uncooperative, or who are generally unpleasant to be around. But there is a difference between working with a jerk and working with a sociopath. Jerks may be selfish and rude, but they have consciences buried down there somewhere. With this person at the office, there is some hope that you could find a way to cut through the hostility and work together. If your work life is plagued by a sociopath, however, you’re unlikely to have such luck — this is a coworker without morality or guilt, someone who isn’t likely to change.

Declaring someone a sociopath may sound dramatic, but, although we shouldn’t throw the term around casually, sociopaths are more common than you might think. Sociopathy is an antisocial personality disorder that affects one out of every 25 people, according to clinical psychologist Martha Stout, author of The Sociopath Next Door. With numbers like that, it’s not unlikely that even a small business will at some point find one in its employ. We tend to associate the word “sociopath” with violent killers like Patrick Bateman and Alex from A Clockwork Orange, but most sociopaths aren’t violent, single eyelash-wearing killers (though that would make them easier to identify, wouldn’t it?). What defines a sociopath isn’t a tendency toward physical violence, but rather, as Stout describes, “a complete lack of conscience.” Sociopaths lack the very basic ability to empathize with others, and, although they can learn right from wrong, they don’t feel the guilt and therefore simply don’t care about hurting others. Although most sociopaths aren’t physically dangerous, they can be very dangerous in more abstract ways — particularly in a work place, where a manipulative and conscienceless coworker could affect your career in the long term.

If you’re working with a sociopath, and that person is harming your ability to be effective at your job, the best thing to do may be to try to move into a different department, or — if things are bad enough — even a different job. Sociopaths’ behavior will not change; they will not suddenly develop a conscience or empathy, nor will they feel guilty about the way they treat the people around them. Sometimes the only thing to do is to get away.

Of course, there are many extremely charming people in the world who are not sociopaths, but one trait that many sociopaths share is that they are charismatic. They tend to attract people toward themselves easily and can effortlessly hold the attention of the whole room. In an office, a sociopath may be some whom everyone assumes does a lot of work (because he or she is so often the center of attention), but who in reality does very little.

2. An inability to connect on a deeper level.

Despite their ability to charm people, sociopaths rarely have close friends. Because they lack empathy, they have a hard time connecting on a deep level with other people. In a work environment, this might mean that an employee is well liked on the surface, but isn’t actually friends with any of his or her coworkers.

Stout says that sociopaths are plagued by a sense of boredom, and that this boredom is a real source of pain. She suggests that sociopaths’ destructive behavior link back to a simple desire not to be bored. She told Interview,

[I]f you’re sociopathic and you really have no caring for anybody, there’s not much left, only boredom, and the way to relieve that, apparently, is to play a game and make sure that you win.

These “games” can take many forms, she says, but the primary goal is to get someone else to do “something that he or she would not have done otherwise,” regardless of how harmful that may be for him or her.

Sociopaths lie often and easily, sometimes for no other reason than to see if they can get away with it. In the workplace, a sociopathic coworker’s lies might take the form of fibs about seemingly random things, like where he or she went to lunch, or of much larger violations, like taking credit for work performed by someone else or fabricating data.

4. Being manipulative — just for the hell of it.

A sociopath finds satisfaction in manipulating others to do his or her bidding. If your colleague is a sociopath, you may find him or her manipulating others to think poorly of your work, or even trying to manipulate you into doing his or her work. These manipulations may seem to have no other point than to make life harder for you or to make others have a bad opinion of you. A sociopath wants control over others, and getting you to do extra work, come in on a weekend, or even question your own ability is a sociopath’s way of declaring power.

When called out for their manipulations, sociopaths will not actually feel guilty (though they pretend to). Stout suggests that such people will often try to generate pity in others (and are perfectly willing to lie to do so); gaining pity is, too, a manipulative tactic that gives them power over others.

5. No sense of boundaries.

Sociopaths don’t care about the rights or feelings of others, so they’ll have no problem with demanding that you be on call night and day, that you stay late, or that you field phone calls late at night.

6. Being irresponsible at work.

Sociopaths don’t have a sense of duty or guilt, and if they don’t like their jobs — and particularly if they are bored by them — they won’t feel bad about shirking their duties or manipulating others to perform them. They tend to be impulsive in general, so they may perform inconsistently at work, swinging between high productivity and then not caring at all.

7. Being quick to anger.

In his 1941 book The Mask of Sanity, psychiatrist Hervey Cleckley identified the major characteristics of a sociopathic person; one of these is “inadequately motivated antisocial behavior.” A sociopath can lash out (verbally or physically) very suddenly, and for seemingly small cause. If your coworker seems fine one minute and is berating you for a tiny infraction the next, he or she may be exhibiting sociopathic tendencies.