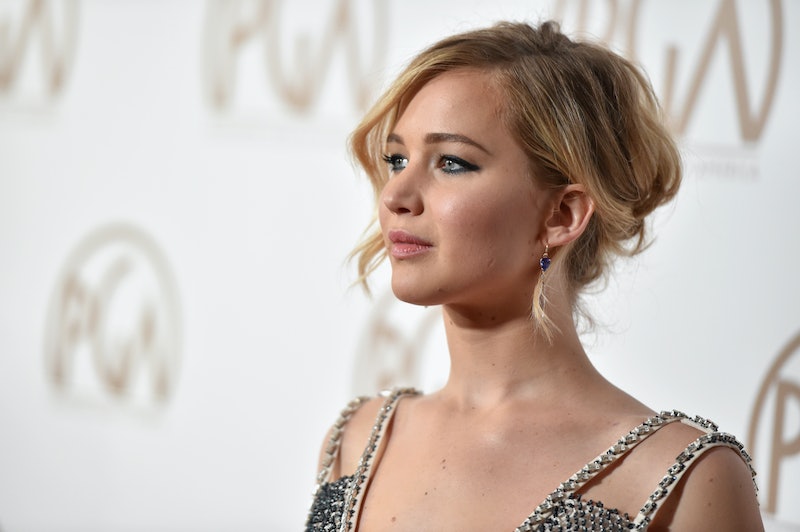 Prepare yourself, because I'm about to drop a serious truth bomb on you: Hollywood, just like many other industries, has a serious problem with the pay gap between men and women. Oh, you're not shocked? Neither am I — and neither is Jennifer Lawrence. You'd think that if any actress would be out-earning her male counterparts, it'd be Lawrence, the Oscar-winning lady who was at the helm of the wildly successful Hunger Games series and so many other good, important films in the past few years, but nope, she is not immune. This week, Lawrence penned an essay on the pay gap for Lenny, Lena Dunham's new feminist newsletter, and even though I'm a little biased since I adore everything Lawrence says and does, it's obvious she hit this one on the head.

In true Jennifer Lawrence fashion, the 25-year-old explained a pretty troubling issue in a very relatable way — complete with F-bombs. It all started with the Sony hack, when Lawrence found out she was making less than her male costars in American Hustle , an experience that was very eye opening for her. She wrote that since then, she's realized that being opinionated as a woman means she appears difficult, and that she hasn't negotiated better pay for herself because she wants to avoid seeming "spoiled," even if a man in her position would do the same thing. All really good points, but what really stuck out to me is this: Lawrence's pledge to stop caring so much about being likable when she has something important to say.

Or, as her American Hustle character would have said:

I’m over trying to find the “adorable” way to state my opinion and still be likable! F*ck that. I don’t think I’ve ever worked for a man in charge who spent time contemplating what angle he should use to have his voice heard. It’s just heard. Jeremy Renner, Christian Bale, and Bradley Cooper all fought and succeeded in negotiating powerful deals for themselves. If anything, I’m sure they were commended for being fierce and tactical, while I was busy worrying about coming across as a brat and not getting my fair share. Again, this might have NOTHING to do with my vagina, but I wasn’t completely wrong when another leaked Sony email revealed a producer referring to a fellow lead actress in a negotiation as a “spoiled brat.” For some reason, I just can’t picture someone saying that about a man.

It's my hope that Lawrence is making this statement with 100 percent intention to follow through, because I couldn't agree more. Of course, the reason so many people have fallen in love with her is because she's so likable, but could that have also been her downfall? It's easy to love her because she makes it so easy. She loves food, she gets nervous around famous people, she makes all of us feel a little bit more normal. But when it comes time to do important things like negotiating fair pay and speaking up for what she believes in, Lawrence shouldn't have to feel like she has to keep her Relatable Funny Starlet costume on.

Lawrence is great for many reasons other than being likable. She's also hard working and talented, and those qualities shouldn't take the backseat to the fact that she's also a woman. If this essay is signaling a turning point for her, I'm here for it. I can't wait to see more sides to Lawrence, because women can love eating an entire pizza in bed and getting what they deserve, all at the same time.