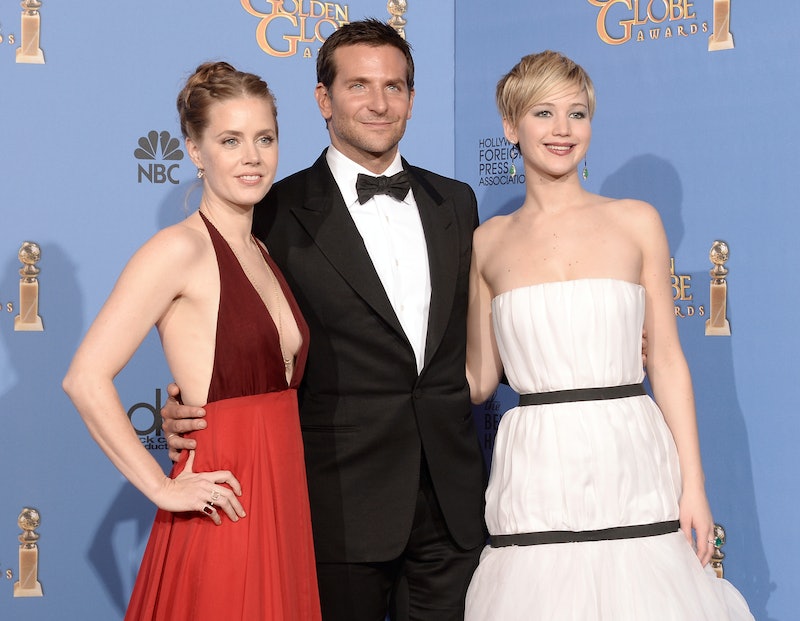 It doesn't matter if they're Oscar winners, women still get paid way less in Hollywood than their male counterparts. That's what this Sony hack has shown now that details have come out about what Jennifer Lawrence and Amy Adams were paid for American Hustle. They're two of the biggest actresses in the world, and yet they still suffered at the hands of the gender wage gap.

As Sony's private information continues to be leaked in the wake of their hacking, it was discovered that American Hustle's male actors Christian Bale, Jeremy Renner, and Bradley Cooper all earned nine percent of the talent budget. But Amy Adams and Jennifer Lawrence only earned seven percent. When you're likely talking about hundreds of thousands of dollars, that two percent difference doesn't seem like much — but it really is.

It's not about the amount paid; it's about the fact that these two women, whose roles were just as important to the film, were paid less than the male stars for seemingly no reason other than their gender. One can argue that Lawrence didn't have as much screen time as the men, but Amy Adams was an integral part of the cast and definitely deserved to be paid equally. She was nominated for an Oscar for her leading role and everything! Plus, Cooper's role was considered to be a supporting one, so why did he still earn the same as leading actor Christian Bale?

This isn't the first time the Sony hack exposed the gender wage gap at the company. When details on their employees' salaries hit the Internet last week, it was discovered that the highest paid executives list was 94 percent male. Their highest paid female employee was still making $800,000 less than her male counterpart.

I don't think the hackers were right to target Sony or to threaten their employees and leak sensitive information. But now that this information is out there about the sexist payment scale, it forces them to be held accountable for underpaying actresses and female employees. But most importantly, hopefully it will stop them from getting away with that in the future.