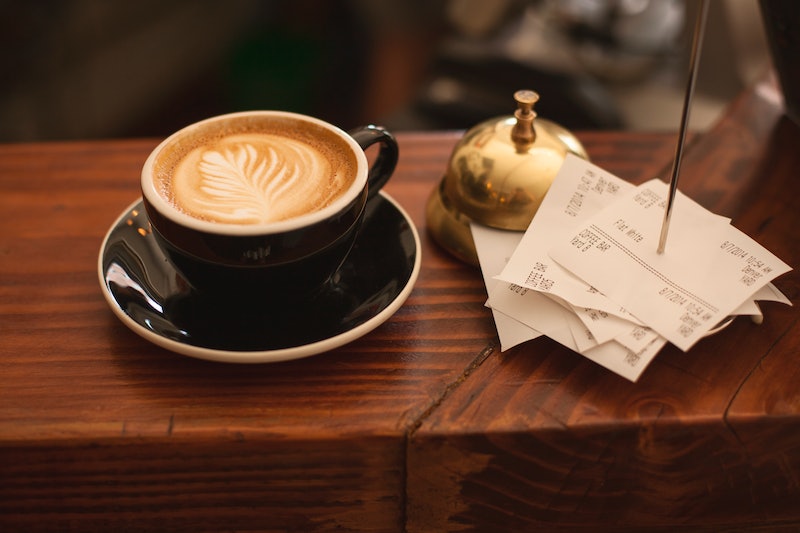 When it comes to urban legends of questionable veracity, "you'll save big money by not buying coffee from a cafe" is one of the most commonly recited ones — probably up there with that one about how your roommate's cousin's boyfriend's Pilates teacher once bought some gum that had spider eggs in it. But every time you plunk down cash for yet another PSL, it's hard not to think about whether you're sabotaging your financial future through your fancy coffee habit. Could you really be effortlessly building a safety net for yourself, simply by brewing a cup at home? Are you literally latte-ing away your life?

Well, yes and no. Yes, you can obviously cut down your costs and build up your savings by tightening your budget and minimizing unnecessary spending — which, for you, may mean cutting out delicious, frothy lattes prepared for you by friendly strangers. But skipping lattes isn't necessarily the financial cure-all that it is often presented as. And making coffee at home isn't the only way to develop greater financial responsibility in life.

Exactly How Much Money Making Your Own Coffee Saves

Let's start with the bare facts: yes, you will obviously save money by making your coffee at home rather than buying it on the way to work. You always save money by making things at home — be it coffee, sandwiches, pants, babies, whatever. Depending on where you live and how you prefer to take your hot caffeine water, if you're buying coffee, you're spending between $1 and $5 per cup. Meanwhile, brewing a cup of coffee at home costs you between 16 and 18 cents per cup.

However, don't start feeling latte-shamed — cutting out coffee is not the only way to save money. And depending on the rest of your expenses, it might not even be the best place to start. So before you sentence yourself to a life free of adorable latte art, write out a list of all your monthly expenses, and figure out what you're actually wasting the most money on.

So, Is It Worth Cutting Out?

OK, let's say you're a latte fanatic who is currently rending your garments in fear and shame over the idea of blowing $1,200 a year on all that half-caf foam. That's legit. But while skipping the latte and brewing at home would save you some money, many financial experts believe that the real place to save is with the higher priced elements of your budget — like your rent or your car.

Vox's Timothy B. Lee summarized the philosophy of cutting down on big budget items as "Often, when people try to cut costs, they do it by reducing small, optional expenses...But while trimming those kinds of expenses never hurts, it's often more important to focus on expenses that people think of as the essentials."

Using this philosophy, you might look into living in a cheaper apartment that's just as safe as your current one, but lacks some of the cooler amenities or makes your commute a little more drawn-out and annoying. This budgeting philosophy also recommends against upgrading your lifestyle due to raises or peer pressure — so that would mean staying in a cheaper apartment or living with roommates longer than you had hoped to, even though you've recently gotten the raise that would technically allow you to live alone; or getting a very basic car, even though you could afford something flashier.

Of course, this is just one of many budgeting philosophies, and no one financial philosophy is right for everyone. It's OK to decide you'd be happier spending the money on your lattes — or that you're willing to take the financial hit on your nice apartment. You just have to be fully aware of what you're spending and how you're spending it.

Figuring Out Your Needs Vs. Your Wants

So how do you become more aware of what you're spending, and whether you're spending your money on stuff that is truly important to you? A good place to start is by breaking down your monthly expenses into "needs" and "wants."

In our budgets, our "needs" are the things that are absolutely essential for our existence — so that includes paying for things like shelter, clothing, food, transportation to and from work, and utilities like heating and water. According to financial experts, pretty much anything that falls outside of this category is a "want" — and that includes things that are nicer versions of the essentials, like food at a good restaurant, clothing you buy just because it looks nice (rather than out of necessity), a cool-looking car, etc.

This exercise isn't supposed to shame you for spending money on non-essentials, however. Though some of us may have to live a life where we can only spend money on "needs" due to financial strain, it's fine to spend money on "wants" if you're able to — they're the things that allow us to feel pleasure, explore our interests, and generally enjoy life. So separating out "wants" and "needs" isn't supposed to make you feel bad — rather, it's supposed to empower you to know how you can save money if you want or need to.

Once you've separated out your needs and wants, you can check out how your budget actually works in real life by tracking your expenses. There are a lot of expense tracking and budgeting apps out there, all of which can help you figure out what you're actually spending money on — which I promise will be a thoroughly shocking (but ultimately positive) experience.

Real talk: when I first started using an expense tracker, I spent about a solid week covered in a thin, viscous coat of shame regarding how I spent my money. How was I always whining that I was broke when I spent $120 a month on acro-yoga and $70 on a gym membership that I literally never used? How did I spend $500 on eating out last month, when I only remember consuming bananas and pizza rolls? I quickly learned that lattes were the least of my financial problems. My budget wasn't just composed of "needs" and "wants" — there was also a fair amount of crap on there that I didn't even really want, but was paying for out of habit. For me, those became the first places to focus on cutting corners, and I decided that examining my latte habit could wait until I had straightened out how much money I was currently blowing on novelty gym classes.

Once I got into the swing of tightening my budget, I realized that I did actually feel like my latte budget was wasteful. I ended up buying a latte machine, which cost slightly more than a regular coffee machine, but also didn't make me feel like I was totally depriving myself.