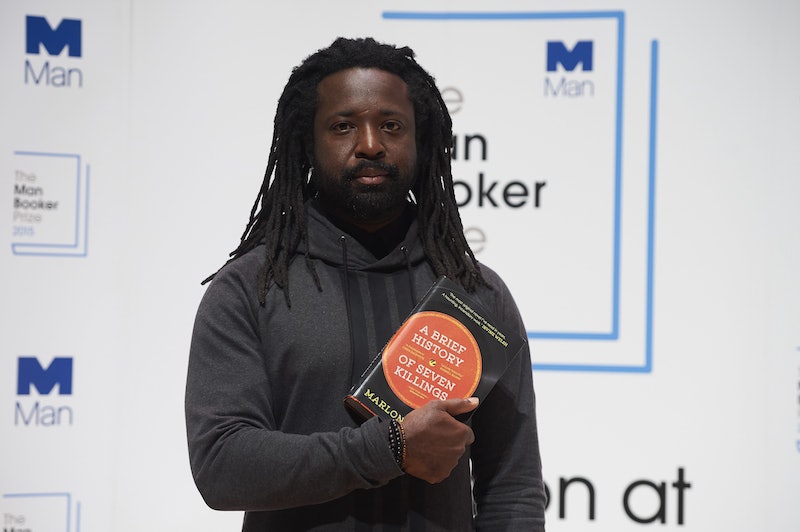 It's been a long and anxious wait, but the news of who won the 2015 Man Booker Prize is finally out. This year, the award goes to Marlon James, author of The Book of Night Women, for his novel, A Brief History of Seven Killings . In addition to the prestige of being the first Jamaican-born winner, James will take home a $77,000 bounty.

A Brief History of Seven Killings begins with an attempt on Bob Marley's life in the 1970s, moves to New York City in the 1980s, and returns to Jamaica in the 2000s. In June, publisher Penguin announced that Marlon's novel had been optioned by HBO for a possible television series. The Man Booker Prize is the third award A Brief History of Seven Killings has won, following the Anisfield-Wolf Award and the Minnesota Book Award.

Since 1969, the Man Booker Prize has been a coveted award for literary excellence. For most of its history, only authors from the Commonwealth of Nations, the Republic of Ireland, and Zimbabwe were eligible for selection. For last year's competition, however, the rules were changed to allow authors of all nationalities to compete, provided their books were written originally in English and published in the United Kingdom. Among the twelve writers shortlisted for the 2014 and 2015 prizes, four were from the U.S.: a country barred from the competition in its previous state.

Some have criticized the Man Booker Prize committee's decision to steer away from prominent names in favor of undiscovered talents. Midnight's Children author Salman Rushdie claims that, in the two years the award has been open to U.S. competitors, its judges have chosen "new voices and younger writers" over literary A-listers like "Ishiguro, ... Atwood, [and] Franzen." A Man Booker winner himself, Rushdie admits: "I haven't been on a Booker Prize short list for 20 years."

Given that Ishiguro, Atwood, Frazen, Rushdie, and their ilk will sell novels regardless of whether or not those novels win awards, the Man Booker Prize's curation of previously-unnoticed authors can be seen as a boon to the writers' economy. The literary A-listers aren't wanting for money, but lining the pockets of up-and-comers encourages them to indulge in the craft. It says: Let Barnes and Noble turn out their books on the shelves. It doesn't matter. We don't play favorites here.

One of this year's Man Booker Prize judges, Sam Leith, says that the shortlist — six books saved from an initial crop of 156 — "represents no single person’s taste, but [is a list that] all of [the judges] are proud to own." The process of elimination is a difficult one, because favorite books are inevitably lost to the "careful and detailed and impassioned argument[s]" of fellow judges, and — in the worst-case scenarios — to what Leith calls "brute-force voting."

According to Yahoo!, Hanya Yanagihara's A Little Life was favored to win this year's Man Booker, with Sunjeev Sahota's The Year of the Runaways and A Brief History of Seven Killings just behind. Surging to the front of the pack, James' novel has taken home the award tonight.

More like this
Prince Harry Incorrectly Recites Christina Aguilera’s “Genie In A Bottle” Lyrics
By Jake Viswanath
'Mayfair Witches' Already Changed 2 Major Characters From The Books
By Grace Wehniainen
Your Guide To Watching 'Everything Everywhere All At Once' In The UK
By El Hunt and Sophie McEvoy
I Read Prince Harry's 'Spare' So You Don’t Have To: 11 Highlights To Know
By Marina Watts
Get Even More From Bustle — Sign Up For The Newsletter
From hair trends to relationship advice, our daily newsletter has everything you need to sound like a person who’s on TikTok, even if you aren’t.