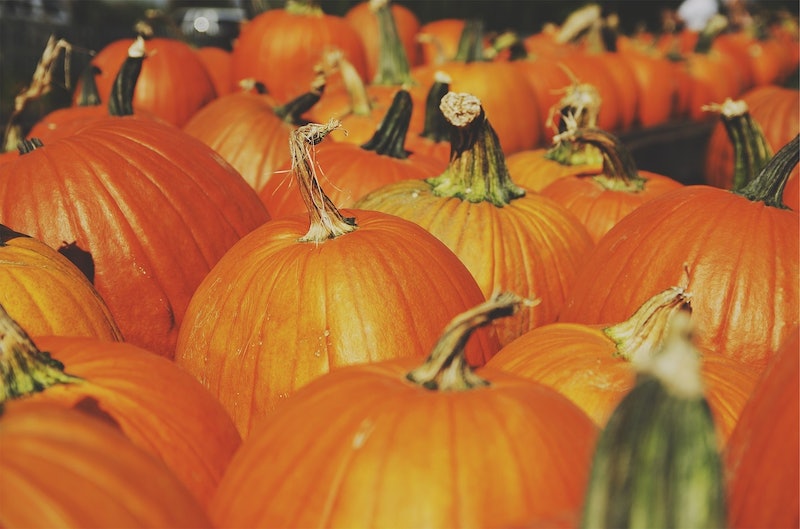 Growing up, not a Halloween season went by without my home undergoing a heavy dose of "Ghostbusters," "Time Warp," and "Purple People Eater" played on loop, occasionally switched out with another '90s cassette titled Sounds of Halloween, chockfull of eerie sound effects and interruptive bloodcurdling screams. It became evident early on that a spooky Halloween playlist was requisite to any seasonal fright-fest. As I grew older, I realized that other (less literal, more enjoyable) tunes could also fit the bill for the occasion. So, in celebration of older — more aware and discerning — you, who has survived the days of one-eyed one-horned flying purple people eaters, here are 55 alternative Halloween songs for the ultimate indie monster bash playlist.

Chances are you already have "Thriller" and the "Rocky Horror Picture Show" soundtrack queued up on your Halloween playlist. This roundup focuses on alternative selections you might not have previously considered to be "Halloween-themed," choices that are very much on-theme but decidedly more obscure, and even brings in a few old school selections simply because it would be sacrilege to exclude them. So for a night of fright this year, gather your best-disguised friends for an evening of devilish debauchery, and set the stage with this mix.

Nothing better declares that the party has officially started like this heavy "Jock Jams" beat by the blues rock duo.

2. "The Boogie Monster" by Gnarls Barkley

This funky number has Cee-Lo Green delivering lyrics like "I've got a monster in my closet / Someone's underneath my bed" with a straight face and pure soul.

Aggressive drums and shredded guitar punctuated by howls become the backdrop for a sexually-charged tale that easily doubles as a werewolf narrative, especially when paired with the track's striking music video. "But I bet we wouldn't get too far / Before the transformation takes / And blood lust tanks and crave gets slaked."

5. "Little Ghost" by The White Stripes

Here, the American rock duo deviates slightly from their standard fare for a folkier ditty with blue-grass flavor that speaks of an impossible love with an apparition: "When I held her I was really holding air."

The video for this disco-infused synthpop banger features a werewolf dancing in homage of Michael Jackson before turning on his audience, and the band, leaving no body intact, literally tearing up the dance floor.

This markedly Halloween-themed song has a video to match, full of gore in the form of detached limbs, corpses, and a reel of disturbing images.

LA indie pop band tells this ghost to "Find your way back to the grave."

André 3000 is terrified of his bride in this literal-lyriced song ("I wait my whole life to bite the right one / Then you come along and that freaks me out"). His scary love interest, played by Kelis, reassures him: "Don't run, I'm not the sun."

A ghostly chant of "Ah-ooh, Ah-ooh," repeats through this spooky single by the English electronic band.

11. "The Killing Moon" by Echo And The Bunnymen

This '80s classic will bring some nocturnal nostalgia to your party.

The song opens with, "I live in a graveyard" because, "Yeah, I'm just as see-through as Casper the Ghost."

We all can relate to the Australian electronic band when they say, "I get so haunted, that I'm misunderstood tonight."

While the lyrics are sparse, when they do make their way into this mostly instrumental track and aren't just repeating "Dracula, Dracula" they're saying, "Everybody party time / Some of us will never sleep again."

This late-'80s garage-punk jam is a must for any self-respecting Halloween playlist. The track is creepy to another level with Lux Interior's menacing lyrics and buzzing.

16. "Highly Suspicious" by My Morning Jacket

Falsetto meets beastly baritone in this vocal mashup that sounds more like something off the The Nightmare Before Christmas soundtrack than the American rock band's (appropriately titled) album, Evil Urges.

Give your guests an instrumental break with this single off the artist's album Deadringer.

This eerie ballad that begs "Don't stop haunting me in this old house" is pure early-'90s with synth-pop percussion and high hat.

The ethereal single opens with a carnival-like melody, and shrieks before morphing into an EDM dance track.

This single from the Canadian electronic music duo is at once enchanting and spine-chilling.

The British band's haunting ballad starts slow and spellbinding with lines like "a starlight in the gloom" and "our souls won't be exhumed" before crescendoing to an electric screaming climax.

23. "The Chills" by Peter Bjorn and John

Pick up the pace with this quick number by the Swedish indie pop trio who wants "To hear you cast a spell so sweet."

24. "Seven Devils" by Florence + The Machine

Your Halloween party should have its share of theatrics, and this dramatic track delivers exactly that.

This bodacious instrumental break combines afro-beat, funk, jazz, and soul for an infectious interlude that will have everyone moving to the beat.

The American rock duo are regulars for producing party hits. This one caters to Halloween inclinations: "To catch a monster / We make a movie / Set the tempo / And cut and cut its brains out."

28. "The Ghost Inside" by Broken Bells

This metronomic track from the space rock collab is decorated in the eerily high falsetto croons of The Shins' James Mercer.

The telling of this dark fairytale is best delivered in the dissonance between Thom Yorke's agitated voice, and lyrics against the euphonious soaring orchestration that backs it.

A little number for all the bloodsuckers in attendance: "You're a vampire baby / No reflecting at all / You never think what you do really hurts."

The track starts off with a blood-curdling scream, and then gives way to the electronic experimentations of the Spanish DJ.

32. "The Witching Hour" by Wild Nothing

At this point in the party, if the question is "is the witching hour trying to take me away now?" the answer should be "yes."

I still can only think of Ryan Gosling any time I hear this song, but that's certainly no reason to exclude it from your party playlist.

Church organs straight out of a scary movie explore variations on a very unnerving theme in this instrumental break.

Any true Halloween playlist has to have at least one song about a Jack-o'-Lantern, and this catchy number delivers: "And like a knife / It cuts / My love is merely something like a pumpkin."

36. "Sisters Of The Moon" by Craig Wedren, St. Vincent

Complete with ghostly howling "Ooohs" between mentions of "black robes," a "black widow," and a "black moon," this dark duet adds some black magic to your mix.

Heavy reverb and a full set of drums back lyrics like, "Deep into the darkness where I hide / The monsters all dig down deep inside / You never know when they're satisfied."

Also available as a Crystal Castles remix, if your monster bash is really popping, this original version by the English post-punk band is still party-perfect. "I picture my own grave, 'cause fear's got a hold on me."

This hair-raising ballad sung in a very low register hardly sounds like the Swedish band we're used to. But creeping us out in devilish deepness and singing lyrics like "Through the thick of the woods and the shimmering glare the moon up above lights up the air," it's perfect for your Halloween playlist.

The Chicago band delivers a strange narrative on spiders: "Spiders are fillin' out tax returns / Spinning out webs of deductions and melodies."

Like everything from the dream pop duo, this track is perfect hazy chamber pop for a quieter moment at your party.

42. "The Yawning Grave" by Lord Huron

The single consists of only two lines, but the instrumentals take the listener, and your party guests, on a soaring ghostly ride.

44. "Superstition" by The Kills

The throaty vocals, deep register, and eventual screams make this single by the garage rock duo a perfect addition to the Halloween backdrop.

A tambourine beat backs this traveling song. "I'm walkin' to the other side / With the devil tryin' to take my mind" but "The scarecrow's only scarin' himself."

46. "Walking With A Ghost" by Tegan And Sara

This Canadian sister duo has no time for ghosting.

The Gothic rock band can be counted on for a few Halloween-worthy jams. This one is especially spooky despite the synth with whispers and talks of a candy striped legged Spiderman "Stealin' past the windows of the blissfully dead / Looking for the victim shivering in bed / Searchin' out fear in the gathering gloom."

Slow down with this darker, ghostly track by the usually upbeat indie rock band.

The folky number brings enlightened major chords to what sounds like a terrifying situation: waking up to find yourself a ghost. "Where oh where'd my body go?"

50. "Beautiful My Monster" by Husky Rescue

Faint whispers of a short phrase crescendo into a childlike melody, painting a picture of pale pajama-clad twins holding hands and staring back at you from the end of the hall.

51. "They Are Night Zombies!! They Are Neighbors!! They Have Come" by Sufjan Stevens

Opening with strings and staccato chanting, this lyric-filled track tells a demonic tale: "We are awakened with the axe / Night of the Living Dead at Last / They have begun to shake the dirt / Wiping their shoulders from the earth."

52. "Love And Terror" by The Cinematics

Guitar drives this dark, assertive track by the Scottish band.

The playlist wouldn't be complete without this upbeat classic. "A dreaded sunny day / So let's go where we're happy / And I meet you at the cemetery gates."

When the party nears its end, this entrancing ballad takes the mood in a dreamy direction.

Here's hoping your monster bash never dies out, but has an afterlife all its own.