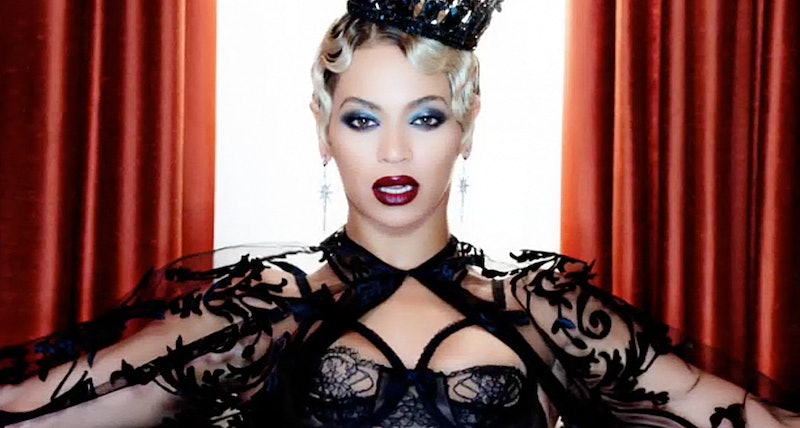 Halloween is just around the corner, and you've got a big dilemma: you're hosting a party, but you don't know what kind of music to play. So, naturally, you plop down on your couch, open up your laptop, and start searching for scary Halloween songs. Unfortunately, the suggestions you're finding aren't exactly what you're looking for. "The Monster Mash"? "Tubular Bells"? "This Is Halloween" from The Nightmare Before Christmas?? I mean, sure, those tracks fit the theme, but nobody actually wants to listen to that kind of music at a party! You're looking for songs that both set the mood AND make people dance — modern pop songs that aren't hokey and/or totally obvious. You're in luck, because I've put together a Halloween playlist full of fantastic tunes that do just that.

Trust me, this playlist is a game-changer. No longer will Halloween party guests have to suffer through AC/DC's "Highway to Hell" and Michael Jackson's "Thriller" 20 times throughout an evening! My 2015 Halloween playlist features frightening jams from major pop artists like Beyoncé, Lady Gaga, Rihanna, Adam Lambert, Little Mix, and Kesha — and I promise it's going to make your event totally spook-tacular. Check it out via Spotify below.

"Haunted" is one of my favorite songs from Beyoncé's 2013 self-titled album. With its eerie spoken intro, hard-hitting percussion, and ghostly background vocals, it's the perfect track to kick off your Halloween gathering.

Adam Lambert — "Evil In The Night"

"Evil in the Night" will definitely get your costumed partygoers dancing (and its lyrics about a nefarious lover will send chills down their spines).

This slice of '90s-influenced dance-pop is nothing short of magical.

"Off-off with your head, dance-dance 'til you're dead," Yeah Yeah Yeahs vocalist Karen O commands on the infectious "Heads Will Roll" hook. Uh, could there be a more perfect Halloween song?

The "I'm friends with the monster that's under my bed" line always makes me think of the 1989 movie Little Monsters , which stars Howie Mandel as a blue goblin who lives under Fred Savage's bed. I honestly can't think of anything more terrifying than that.

There's just something so haunting about MS MR's "Bones." "Dig up her bones, but leave the soul alone." Eek!

Little Mix's buoyant tale of amateur witchcraft should help keep the mood at your get-together from getting too dark and scary.

I know it may feel weird to bust a move to a song about being followed by an evil spirit... but I suggest you just go with it. "Ghost's" groove is pretty much impossible to resist, anyway.

With its frantic storm of electronic blips and bloops, B.o.B's "Out of My Mind" does a great job of making you feel like you're losing touch with reality.

Fifth Harmony — "I'm In Love With A Monster"

I mean, it's on the Hotel Transylvania 2 soundtrack... how could I not include it? Plus, it's funky and fun.

Marina And The Diamonds — "Radioactive"

"Radioactive" is an icy (but totally danceable) pop track about love gone wrong. "When you're around me, I'm radioactive/My blood is burning, radioactive," Marina Diamandis sings on the soaring chorus. I think she might want to break up with this person before she ends up mutating or something. Just a thought.

A good old fashioned dance tune about partying forever and ever until you fall down dead. It's so Halloween.

Gaga's "Bloody Mary" is 100-percent guaranteed to give everybody at your big bash the creeps.

Any song having to do with the looney Mad Hatter from Alice's Adventures in Wonderland is dark-sided in my book.

OK, OK, you got me. You've probably heard "Disturbia" at a Halloween party before, but I just couldn't bring myself to skip it. It's too good!

Tegan And Sara — "Walking With A Ghost"

The scariest thing about "Walking With A Ghost" is how mysterious its lyrics are. There's no explanation of who this ghost is or what it wants; the only thing we know is that Tegan and Sara need to get it out of their heads. Horrifying.

The juxtaposition of "Kill My Boyfriend's" sunny, almost triumphant production with its sinister lyrics is chilling.

"Walking on Air" is delightfully spooky.

Every party needs at least one slow dance, and "Your Ghost's" lyrics are super freaky: "If I walk down this hallway tonight, it's too quiet/So I pad through the dark and call you on the phone/Push your old numbers and let your house ring/'Til I wake your ghost..." The song is almost hypnotizing.

Let's face it, Halloween wouldn't be complete without a little talk of UFOs and alien abductions.

Finally, a disco-tinged pop song about turning into a werewolf! I love it.

"Supernatural" was inspired by that time Kesha claims she had sex with a ghost. Yeah. Enough said.

According to a 2014 interview with singer-songwriter Moxie Raia, "Buffalo Bill" has nothing to do with the human skin–wearing serial killer of the same name from Silence of the Lambs... but he's the only thing I can think about when I listen to the track (and I suspect I'm not alone).

Adam Lambert's latest single is the perfect way to end the night.

Good luck with your party planning!

More like this
How Lady Gaga & Adele Are Closer To The EGOT All Of A Sudden
By Jake Viswanath
Everything To Know About The Musical 'Joker' Sequel – & Lady Gaga’s Role
By El Hunt and Sam Ramsden
Lady Gaga Will Star In 'Joker: Folie À Deux' With Joaquin Phoenix
By Jake Viswanath
Beyoncé’s New Duet Made Her Mom Cry — & Is A Nod To An Old Destiny’s Child Song
By Grace Wehniainen
Get Even More From Bustle — Sign Up For The Newsletter