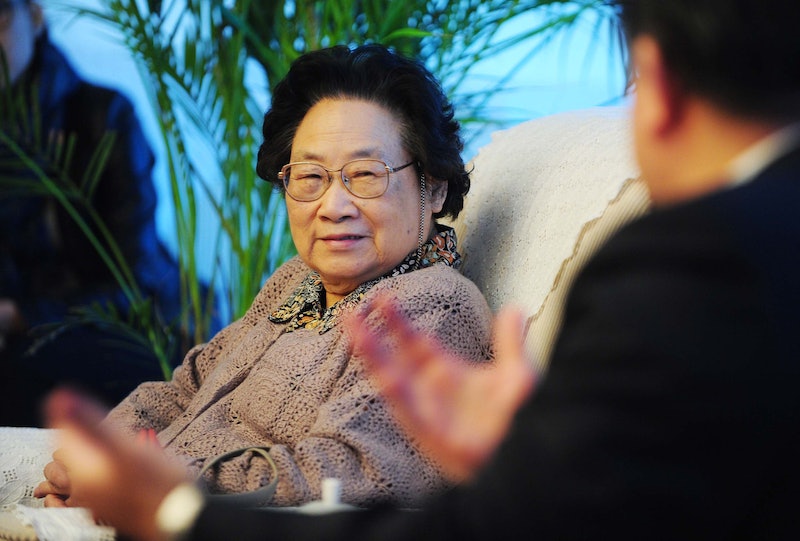 If you look through this year's list of Nobel Prize winners, it's hard not to notice a pattern — because almost all recipients have one thing in common: their gender. According to an analysis by Fortune on the gender gap in Nobel Prizes, women have received awards 49 times, men have received them 825 times, and organizations have received them 26 times since the Prize's inception in 2001. This means only 5.6 percent of Nobel Prizes have been awarded to women — and that, like every other instance of gender inequality we are still battling today, is unacceptable. It's high time for things to change.

Of the prizes, the physics prize was distributed with the greatest gender disparity — only one percent of winners have been women — and literature was the most equitable field, with 12.5 percent of prizes awarded to women. The gender gap in Nobel Prizes has also improved over time, with 19 prizes granted to women between 2000 and 2015 and 11 between 1981 and 2000, compared to five during each of the three previous 19-year intervals.

This year, women fared better overall than they have throughout the history of the award, which is to be expected given that the number of women in all of the fields with a Nobel Prize — physics, chemistry, medicine, literature, peace, and economic sciences — has increased over the past century. Nevertheless, only 20 percent of this year's winners (excluding organizations) were women. While eight men won Nobel Prizes this year — two in physics, three in chemistry, two in medicine, and one in economic sciences — only two women did: Svetlana Alexievich for literature and Tu Youyou in medicine.

Dr. Tu, a retired researcher at the China Academy of Chinese Medical Sciences and the first Chinese person to win a Nobel Prize in science, extracted the compound Artemisinin from the Artemisia annua plant to create a popular malaria treatment drug. The New York Times reports that the award has reignited a debate over the value of traditional Chinese medicine, since Tu learned her extraction techniques from classical texts.

Alexievich, a Belarusian journalist and nonfiction writer, won the Nobel Prize for literature, making her the first nonfiction writer to win the award in over half a century. Her work has exposed the lives of people living through historical events including the Soviet occupation of Afghanistan, the Chernobyl nuclear disaster of 1986, and World War II, whose Russian female soldiers are the topic of her bookWar's Unwomanly Tongue.

Fortune wasn't the first media outlet to recognize the Nobel Prize's gender problem. In 2012, a year when zero women won Nobel Prizes, NPR declared the awards a "boys mostly club." One major source of this imbalance, NPR pointed out, is that three of the six awards are in science, a field notoriously hostile to women. Sharon Bertsch McGrayne, author of Nobel Prize Women in Science: Their Lives, Struggles and Momentous Discoveries, told NPR that anti-nepotism laws that prevented women from working at the same universities as their husbands until 1971 were a huge hurdle to women winning science prizes.

While more and more women have been able to succeed as scientists in recent years, however, the number of winners has not gone up in proportion. Ultimately, the best explanation is that "men tend not to nominate them, and women don't nominate themselves," Rosalind Franklin Society founder Mary Ann Liebert told NPR. While it might be natural to assume there is a gender imbalance in the nominating committee, three out of five members of the committee are women, according to the Norwegian Nobel Committee's website. As is often the case, more women doesn't necessarily mean less sexism.

Rather than reflecting one particular obstacle, the paucity of women winning Nobel Prizes most likely provides further proof that conscious effort is necessary to compensate for gender biases, both during Nobel Prize nominations and at all stages in women's careers that could lead up to them.

More like this
25 Quotes About Love To Share During Pride Month 2022
By Madeleine Aggeler and Emma Garza
How To See The Lunar Eclipse On May 15-16, 2022
By Kaitlyn Wylde
5 Crystals To Manifest More Money
By Megan McCarty
Is TikTok’s “Villain Era” Trend Just An Excuse For Bad Behaviour?
By Chanté Joseph
Get Even More From Bustle — Sign Up For The Newsletter