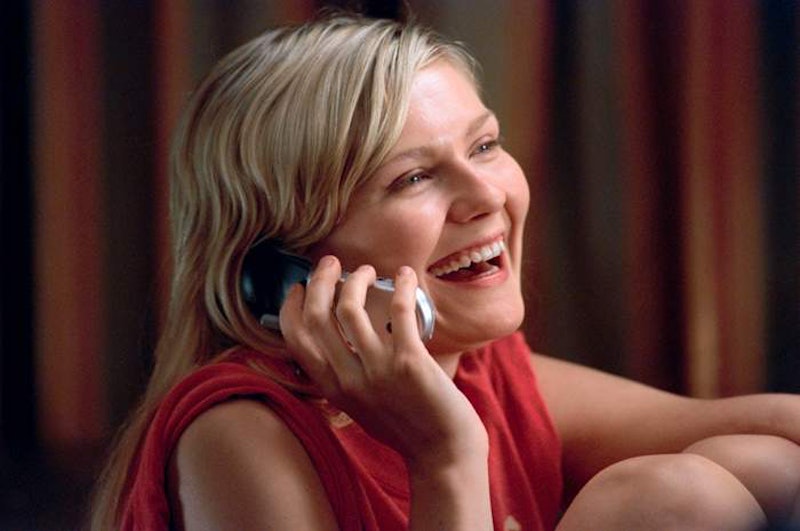 Elizabethtown is one of those movies that means a lot to you as a wayward teen, (not that I’d know anything about being a wayward teen, mind you) but doesn’t really hold up when you reach adulthood. (The same goes for Garden State.) As a teen, Orlando Bloom’s Drew Baylor is misunderstood and just, like, on his journey, man, but when you’re a grown-up he is pathetic and really just needs to get over it. Kirsten Dunst’s Claire Colburn is quirky and fun and she’s just not tied down by life, you know? So that means she’s really and truly living. Except Dunst’s character in Elizabethtown is actually awful, in my opinion, and she spawned the revival of one of the most important character categorizations of recent cinema history — the Manic Pixie Dream Girl.

When film critic Nathan Rabin reviewed Elizabethtown in 2007, he described the MPDG trope, saying that she “exists solely in the fevered imaginations of sensitive writer-directors to teach broodingly soulful young men to embrace life and its infinite mysteries and adventures.” Other examples include Natalie Portman in Garden State and Zooey Deschanel in (500) Days Of Summer. The gist is that no viewer actually learns anything about these women — they’re just there to be whimsical and exciting and prop up the hurting male lead whenever he needs to be fluffed.

Though Rabin has apologized for naming the MPDG trope, he’s right about it. He’s always been right about it. And Cameron Crowe is wrong, wrong, and wrong for writing the character of Claire Colburn. Claire is the absolute worst. Here are a few reasons why she is not only the worst in general, but the worst character in Elizabethtown, which for such a stinker of a movie is truly an insult.

Claire does this clicky hand-camera thing when she wants to capture a moment, which is stupid, but it also show the movie’s age. If Elizabethtown were made now, Claire would have an iPhone with a bunny-eared covered that she used to take pictures and plop a filter on everything. Claire, just get a camera. John Mayer did the whole “remembering a moment without a camera” thing before you did.

Claire is a flight attendant who gives Orlando Bloom’s character seat in first class because the flight is empty and he’s upset. Cute, right? Except she really does it so she doesn’t have to walk to the back of the plane to serve him, which is kind of her job. When he tells her that his dad died and that’s why he’s on a plane, she looks at him with this very wise, soulful, emphatic look that’s what I imagine imprinting (like in Twilight) looks like IRL. Ugh. Just give him a ginger and Jack and leave him alone.

There is no movie without Drew Baylor’s exploration of his father’s life and that godforsaken solo road trip. I get that. But Claire and Drew have one long-ass phone conversation and she makes him the gift of a 41-hour road trip? While it’s partly impressive that Claire was able to make that when computer technology was still not that great, Drew gave really no indication that he even liked any of the things she made him do on the trip. And who wants to spread his dad’s ashes at the shot where Martin Luther King, Jr. was shot? No one.

I’m sure you guys can tell that I could go on and on about Claire Colburn, but I’ll stop it here so as not to raise my blood pressure too much. Frankly, I’m tired of this sweet, carefree girl trope (and Claire was one of the first ones to really go big on it). It’s just as bad as the “cool girl” trope in Gone Girl — no one person can be that shallow and fun and still be interesting.