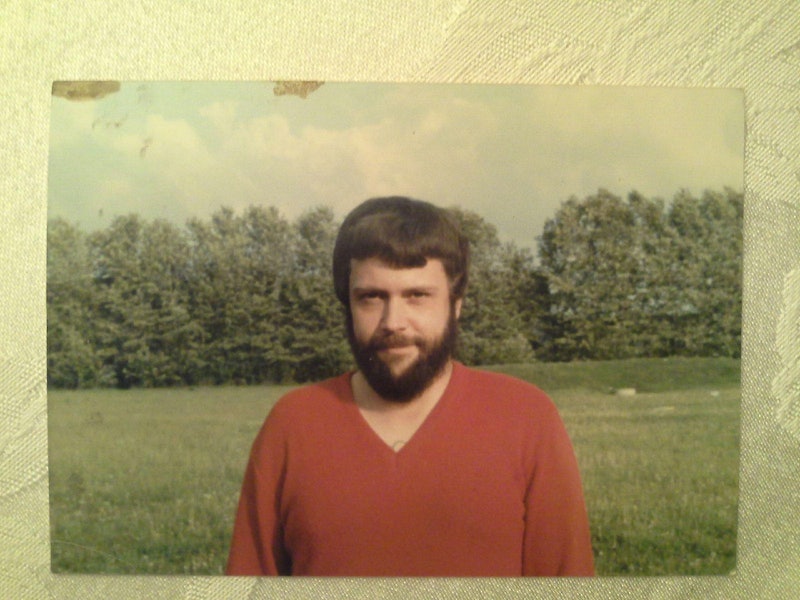 The smell was sweet and sick. Nothing like a hospital, though; it was old and unwashed and dead and settled in. My father died face down in a puddle of his own blood that escaped through his nostrils. “The carpet will have to be cut out or treated,” I thought to myself. The cops escorted me through the house with a warning. “Watch your step. We had to sort of ransack the place,” one officer said. They were looking for his guns.

My father was a tattoo artist. And a hunter. And sometimes a monster. But he was a man. He died alone down a dirt road, in a small house that a sharp gust of wind could flatten. He died face first, nose broken onto the carpet of his living room. He had fallen out of his favorite tan velvet chair that was set up by the front door. He never used the front door. He used the side door in the kitchen instead. I could tell just by looking around.

So I didn’t want to remember my father. I wanted to get to know my father. Since I hadn’t seen him since I was five, I’d spent the last 28 years quietly remembering those same seven things about him. When he died, I took the task of sorting his house and organizing his things, letting the police confiscate his guns and make sure nobody was squatting. I told my sisters and my mother that it was important to me that I get to spend time alone in this man’s house so I could get a feel for him. So I could get to know him. I don’t know if they understood why I wanted to do this, but they eventually agreed.

How does one remove dead person, set in brown blood, from a carpet? I kept thinking. Mom suggested baking soda and vinegar. She said to let it sit for a while. Days, even. And then to vacuum it all up. “He has a working vacuum,” I thought. “Better off than me in that sense.”

I lit dollar store incense and cleared that half of the room. I opened all of the windows, but the sick, pink smell stained every surface. I filled my car three or four times with his belongings and took them straight to a local community center for donation.

Rooting through my father’s life was matter-of-fact and relatively easy 90 percent of the time. His dentures would be thrown away. Food in the fridge went in the trash, too. The Alcoholics Anonymous books could be donated. The little models of mystical dragons could be donated, too. Next to his bed, on a small shelf, was a ceramic mermaid sitting in a seashell. It was plugged in and lit up a gentle blue when I got there the first day, cops in tow. “He must’ve kept it on while he slept at night,” I told the officer. I took the light home and kept it plugged in until it finally burnt out a few months later.

When we left my dad, I was five years old and my mom was a house cleaner for a while. And a damn good one at that. Her high-strung level of cleanliness and order was decidedly not a trait I inherited from her. No, I was more like my father in that department. I could see that instantly in the way his house was set up.

His bathroom was periwinkle blue in all the ways it could possibly be. So is mine. So was his kitchen. So is mine. Both of our cars are blue. “We have the same favorite color,” I thought. He had a patch of land just next to the house that was meant to be a garden. It sat in a perfect square, but its contents were growing wild with all the freedom neglect offers. His neighbor laughed when she explained to me how proud he was of his garden of wildflowers. “They’re just weeds!” she said.

About ten years ago, when my best friend was dying of leukemia, I wrote her a song. I told her I would meet her where the wildflowers grew. But I called them weeds in the song, because I don’t see any shame in it. “There in a garden that’s gridded with weeds” the song goes.

“What’s wrong with a weed?” I’d tell her. They’re strong. They survive hell. They survive forever. They thrive in waste and neglect. What could be more special than that? And on top of all that, they figured out a way to be beautiful and bloom. I had that song about the weed garden tattooed on my back. And just about every year since, I had more weeds and wildflowers tattooed all around it. “So my father and I have that garden in common, too,” I thought. I kept counting the similarities.

I told Mom that I’d set the baking soda into the area of the carpet where the blood was, like she instructed. I poured vinegar over it; it bubbled up and fizzed. The foam it produced quickly turned brown. “Is that what’s supposed to happen?” I asked her. She guessed so, but admitted that she didn’t have direct experience with this type of cleaning. I watched the foam grow and move. I wondered if it would penetrate through the fibers of the carpet and into the padding below. Everything was still heavy with the smell. Especially up close.

My father had a few photo albums, but not many photos of us. He had just one picture of the two of us. He was holding a deer he had killed, and I was petting its head while smiling toothlessly. Half the few memories I held onto so hard involved my dad and his dead deer. We always ate the meat. We never wasted anything.

The next day, I brought a heavy duty Exact-O knife. I thought, if the baking soda didn’t do the trick, I’d have to get crafty and cut that section of the carpet out. I was working for a brewery at the time, and I’d been there nine years. I’d never taken leave, even when my best friend died, which just so happened to be the morning of my first day with the company. I never really took sick days. I worked something like 60 hours a week a lot, and often six or seven days a week. It was festival season, and I had weekend events before and after, like bookends. But they said I could take the week off to take care of the house.

I hadn’t really been happy with my job for a couple of years at that point, but I couldn’t put my finger on my next move. Looking around at what was left of my father’s belongings, I could see that he had a calling. The only items he really hung onto were his tattoo supplies and his art, most of which were locked up in a safe that required hours of consulting with the safe company to open.

My father had more colored pencils than an art supply store. Tracing papers by the ream. Every single item one would need to have a traveling tattoo parlor was all right there, preserved. I had no idea what most of the stuff was, but if it looked like it could be a tattoo tool, I kept it. Hundreds, maybe one thousand different pieces of flash, scratched into acetate. Glass salt shakers filled with black powder that he’d sprinkle on the acetate designs and press onto a person’s chest, thigh, or arm, to serve as a stencil.

Sitting on the edge of his bed, holding art work he made, that his hands touched and his brain thought up, I wondered about myself. I’ve always been a musician, but that couldn’t work full time, I thought. It occurred to me that, with his absence and all, he’d never heard me sing.

Even though it was hard enough to just breathe in that thick, stale air, I took a big breath, deep down into my gut, and I sang as loud as I could. I sang him a different song in each room in the house. I sang gospel, and I sang it with soul. I sang it with hurt and ache and anger and mustard. I sang it the way you sing when you’re a girl in church and feel the holy spirit for the first time.

Then my phone buzzed over and over in the other room. The room with the blood stain. It was my boss. He wanted to know when the funeral was, because he wanted to know if I could still work the event that weekend. He had called, it seemed, just about every day that week. At the end of each call, he told me the company wanted to send flowers, too, as if to make it clear that it wasn’t just that he wanted to know if I could work. I remember hearing him talk while I stared at the blood stain. “I’ll never get rid of it,” I thought, “It’ll never go away.”

When I hung up the phone with my boss that day, still clutching my father’s art in one hand, I decided that I’d had enough of the way things were going in my life. I took stock of the reality that I was absolutely miserable at my job — a job that, even after nine years, was never really going anywhere. I was working with some people who would never accept that a woman can do the same work as a man, and I was working without any real creative rewards.

I drove home, completely forgetting about the vacuum and the stain, got on Craigslist, and looked at the different job sections. It suddenly occurred to me, as if I’d forgotten completely, that I want to be a writer. It’s something I’ve always done a lot of, but only for myself. I looked around my house and saw a stack of journals that could stand six feet tall. All this time I’ve been wondering what I could do, and there it was, staring at me.

I’d been a writer for a long time; I just didn’t realize it until I saw myself in my father. The things he kept, the things he held on to, the things he locked tightly away in a safe, were of no real value to anyone but himself, and ultimately me. Of all the things in the world that he could have passed on, his art was what was worth saving.

I applied to the first writing job I saw, got an interview the next week, got the job, and put in my two weeks’ notice with the brewery. The brewery, who never did send flowers to the funeral, was surprised, but not entirely. “Of course you’re a writer,” my boss said. My father, in some weird way, gave me this gift in his death. And I hope that that small, good part of him, in me, never burns out.Images: Courtesy of Rachel Anne Warren