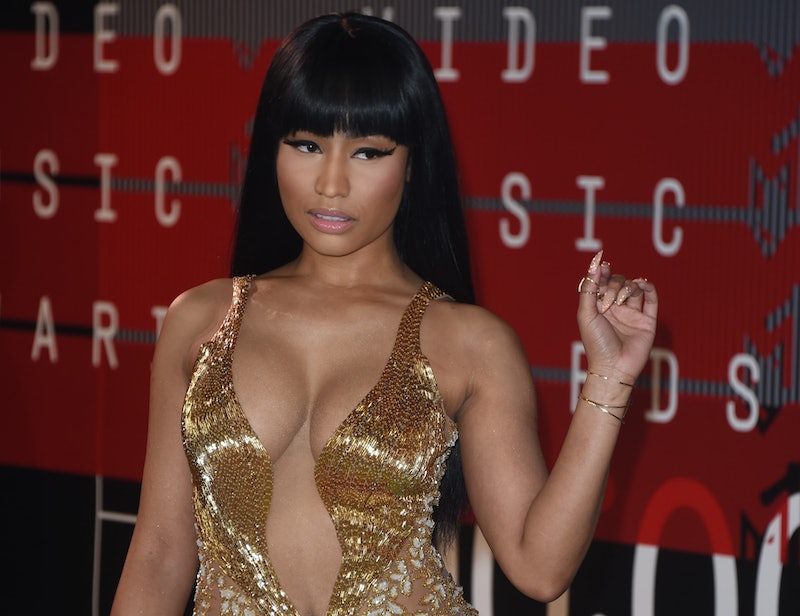 Nicki Minaj continues to slay: On Tuesday, the nominations for the American Music Awards came out, and Queen Nicki Minaj has a total of three AMA nominations: Artist Of The Year, Favorite Artist — Rap/Hip-Hop, and Favorite Album — Rap/Hip-Hop for The Pinkprint. In the Rap/Hip-Hop Artist and Album categories, the 32-year rapper is up against Drake and Fetty Wap — and she better win the award against them.

The odd thing about the AMAs is that they split the artists between Male and Female, except in the Rap and Hip-Hop category. That's a bit of a problem considering there are tons of female rappers and hip-hop artists deserving of recognition — but, if we're focusing on Minaj, it's worth noting that she has been up against the boys before, and she's also beat them in the past. In 2011, she won both categories over Lil' Wayne and Kanye West, and her album Pink Friday took the award over The Carter IV and Jay Z and Kanye West's Watch The Throne. Again in 2012, Pink Friday: Roman Reloaded beat out J. Cole and Drake's albums, and she also got the double-win that year winning Best Artist over Drake and Tyga.

And even though every year seems like the year of Minaj (and rightfully so, because she always kills it), 2015 has been a banner year for the rapper: She continued to establish herself as one of the most outspoken and boss women in the industry — recently, for instance, she abruptly ended a conversation with a reporter from The New York Times because she felt disrespected — and let us not forget her slam dunk moment at the Video Music Awards when she asked Cyrus the most transcendent question of all: what's good?

What is good is Minaj, who, despite the sexism and misogyny in the music world, has risen to the top. She's proven time again that there's nothing she can't do as a woman, even in an industry and world that expects so much of girls and women — if that's not deserving of an AMA, I don't know what is. She's constantly setting the bar higher and higher, and proving that she deserves the utmost recognition and respect for her incredible, incessant hustle. As she herself told V Magazine, "I always feel it's important for me to show females that they can be in charge of their own situation... When I win and when I lose, I take ownership of it, because I really am in charge of what I do." In other words: she's a boss ass bitch, and she deserves another double win this year.

More like this
The Meaning Of Steve Lacy’s “Bad Habit” Lyrics
By Radhika Menon
Olivia Rodrigo Manifested Finally Meeting Demi Lovato
By Jake Viswanath
The History Of Taylor Swift's "All Too Well" & What The Lyrics Actually Mean
By Jake Viswanath
Tour Rehearsals Didn’t Stop Taylor Swift From Attending The 2023 Grammys
By Jake Viswanath
Get Even More From Bustle — Sign Up For The Newsletter
From hair trends to relationship advice, our daily newsletter has everything you need to sound like a person who’s on TikTok, even if you aren’t.