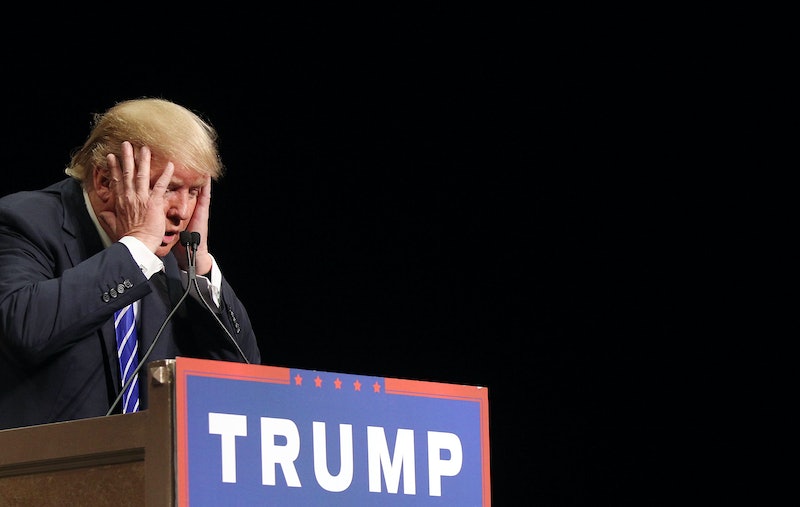 Yes, folks, it's happening. Donald Trump will host Saturday Night Live on November 7. Now that he's cultivated a household name and a circus of media coverage, it only makes sense for Trump to host SNL. In fact, it's exactly what those who oppose a Trump presidency should want to happen. Though his stint will only raise his profile even further through the roof, hosting SNL will also remind Americans exactly what Trump is: an entertainer who is merely a caricature of a legitimate presidential candidate. He's already barely distinguishable from the parody Trump that SNL actors depict, so why not let the real Trump do the legwork for once? It's not as though we're not all laughing at him already.

If you fear that Trump's appearance on the show will only make him more popular with voters, don't worry: We should rest assured that the move could ultimately backfire for Trump's presidential hopes. There are three reasons for this.

Number one, SNL is widely regarded as a liberal show — as are its viewers, who tune in to watch conservatives like Trump being skewered on a weekly basis. Just earlier this month, SNL premiered its 41st season with a cold open featuring actor Taran Killam parodying Trump and his habit of making sexist, anti-immigrant, and all-around offensive remarks. Most people who catch Trump's episode will not be easily swayed by any unlikely charm he'll try to exude.

Secondly, even if Trump does a sensational job of hosting SNL and succeeds in delighting both Republican supporters and Democratic opponents in a demonstration of the power of laughter and how it transcends partisan boundaries, Trump will go back to being Trump when the show ends. One buzz-worthy episode will not erase the countless times Trump has hurled online harassment at someone, hit way below the belt when talking about another candidate, or any other time he's proved that he's anything but a legitimate politician. In the weeks following his SNL stint, he will probably make a comment that cancels out any residual glow from his performance.

And finally, the third and most significant reason Trump's appearance on SNL will be good for his detractors and bad for his campaign? He will remind America that his true strengths lie in entertainment, not politics. The former Apprentice and Celebrity Apprentice host is trying to parlay his success as a reality TV star and real estate magnate into a career in politics, but so far, he hasn't exactly been able to illustrate any political chops. What he has proven over and over again, however, is that he can attract ratings. That nobody can dispute. And the higher he raises his celebrity profile in this election cycle, the more distance he has to fall when his campaign inevitably implodes.

So relax, all you sane people out there who do not want Trump in the White House. Even if Trump makes us laugh on SNL, it won't be a gamechanger for the election. It will ultimately contribute to his downfall. So I guess the joke is on him.

More like this
Who Is Pete Davidson Dating? He "Courted" Emily Ratajkowski At A Knicks Game
By Jake Viswanath
'Waterloo Road' Is Back, With More Than A Few Familiar Faces
By Sam Ramsden and Vivian Iroanya
Prince William Condemns “Unacceptable” Comments Made To A Black Guest At Buckingham Palace
By Shahed Ezaydi
Matt Hancock Broke a Major Rule With I’m A Celeb
By El Hunt
Get Even More From Bustle — Sign Up For The Newsletter