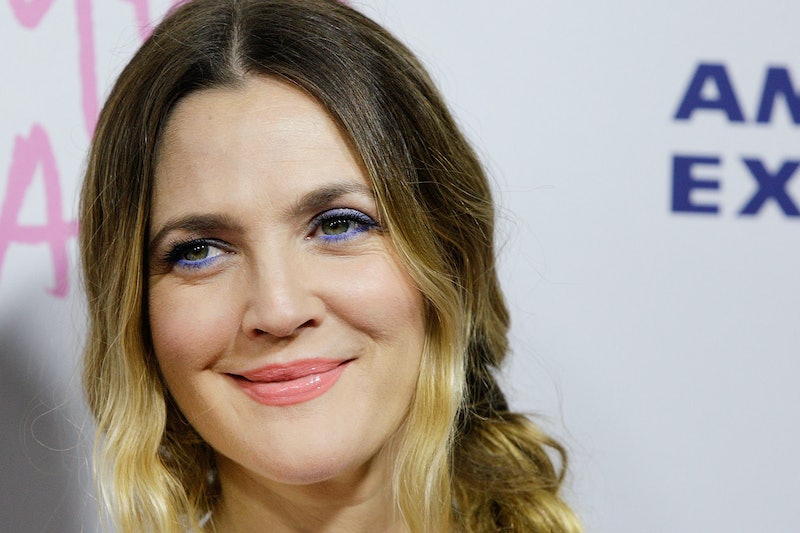 The thought of aging is ofter a sore spot for many ladies, to the point where you don't see a lot of women embracing their wrinkles in public. Instead, photos are softened, erasing the lines like a mistake made with a pencil. Creams are stocked up in medicine cabinets, promising to take back years of laughing and being underneath the summer sun. Lunchtime appointments are made to make the skin a little softer and a little smoother than it was that morning.

From an early age, we're bombarded time and time again by images of women freaking out over who they see in the mirror. And what's worse is that we're sold this idea that it's just an integral part off being a female. Feeling crappy is part of our code, like getting lusty over a pair of heels or craving pumpkin spice lattes. It's all about as outdated a concept as the idea that our place is in front of an ironing board.

Thankfully, a rising group of women who roll their eyes at ridiculous, ageist standards of beauty is rising. Growing older is an integral part of living, and to fear it is to spend a huge chunk of your life being unhappy. The good news, though, is that this nagging fear over gray hairs and fine lines is learned. And when you can learn one thing, you can unlearn another. Below are seven beautiful celebrities who embrace wrinkles at all ages. Consider studying their thought process and give yourself a chance to change yours.

Signed as L'Oreal's new leading lady, Mirren seems to have a plan to not ride the industry’s obsession with youth, but to change it. And how is she going to go about doing that? By being a L'Oreal's spokeswoman, on one condition: That the company not Photoshop a thing. Mirren wants every single wrinkle represented in magazines and commercials, refusing to hide the fact that she's 70 and looks it.

She explained her decision in a Sept. 2015 interview with The Guardian. "The more those roles change for women in life, the more people get used to that image — seeing an older woman’s face. They become more familiar with it. It’s not uncharted territory, visually, so it’s not such a shock to the system any more." Her words shed light on what could be the culprit of our youth-obsessed culture: We see too many women feeling ashamed over what "time has done to them," rather than enjoying it.

In a Hollywood bubble where women sometimes look stretched and pulled and frozen, Ms. Keaton looks like her regular, Annie Hall-like self. She just gives off this self-accepting, honest, candid vibe. And the best part about her? She doesn't pretend that being old feels better than being young, but she wouldn't say being old looks bad either.

Carrying around the title of "America's Sweetheart" for decades now, Cameron Diaz is tired of the dialogue we as women have perpetuated for ourselves. She shared her concerns in an interview with Oprah on OWN, saying, "Women don't allow other women to age gracefully. And we don't give ourselves permission to age gracefully."

Diaz pointed out how nonsensical that predicament is by explaining, "For me I feel like if I — it's almost as if we have failed if we don't remain 25 for the rest of our lives. Like we are failures. Like it's my fault that at 40 years old... I still don't look like I'm 25."

When put that way, those wrinkle creams in your bathroom don't make a whole lot of sense, do they?

Jamie Lee Curtis is outspoken when it comes to the subject of laugh lines and crow's feet. A firm believer in aging unapologetically, she sports silver hair like a badge and refuses to believe that the lines on her face are something she needs to "fix." She made clear in an article that she wrote for Huffington Post in 2012, writing, "I am appalled that the term we use to talk about aging is 'anti.'"

Society's thoughts on lines do seem more than a little extreme, don't you think?

Reese Witherspoon champions for strong female role models, leading the way when it comes to changing the script so that we can see that a strong woman can come in all shapes and sizes (from the pink-loving Elle Woods to the damaged and lost Cheryl Strayed.) So it comes as no surprise that the 39-year-old actress has a well-grounded opinion when it comes to aging, shaming no one in the process while shedding light on what our "anti" behavior actually points to.

In a 2012 interview with UK Glamour , Witherspoon shared her thoughts on plastic surgery. "I'm not for it. I'm not against it. I have plenty of friends who do stuff and if it makes you feel good, great. But I don't think it's the fix for some sort of unease that you're having about who you are as a human being."

You would think that a woman with such a strong role in the fashion industry would be caught up with its unrealistic and hard to uphold beauty standards. But when it comes to the legendary Diane von Furstenberg, that just isn't true. Instead, she chooses to embrace the way her face has changed and, more importantly, not merely live with it but love it.

In her memoir The Woman I Wanted to Be , she wrote:

"I know that people look at me and wonder why I have not succumbed to the progress of technology. Why have I not frozen or filled in the lines of my forehead? Why have I not clipped the bits of surplus skin on my eyelids [...] In my older face, I see my life. Every wrinkle, every smile line, every age spot. There is a saying that with age, you look outside what you are inside. Your wrinkles reflect the roads you have taken; they form the map of your life. My face reflects the wind and sun and rain and dust from the trips I’ve taken. My face carries all my memories. Why should I erase them?"

Drew Barrymore has always had this bubbly, warm-as-sunshine persona, and her brightly optimistic attitude carries over to her thoughts on aging, too. In an interview with Woman's Weekly in 2010, she shared her thoughts on how it felt to age. “It’s the best time of my life — it’s not traumatic at all. I don’t think I’ve ever been happier. It’s like the older I get, the better I get. Gravity and wrinkles are fine with me. They’re a small price to pay for the new wisdom inside my head and my heart. If my breasts fall down to the floor and everything starts to sag, becoming hideous and gross, I won’t worry."

More like this
Instagram & Facebook May Finally Lift Their Notorious Nudity Ban
By Allie Fasanella
Selena Gomez Dismissed Trolls' Comments About Her Body After The Golden Globes
By Stephanie Topacio Long
Phoebe Dynevor Serves ‘Bridgerton’ Underboob In Stunning Floral Gown
By El Hunt
Blake Lively Debuts Red Hair For The 'It Ends With Us' Film Adaptation
By Olivia Rose Rushing
Get Even More From Bustle — Sign Up For The Newsletter
From hair trends to relationship advice, our daily newsletter has everything you need to sound like a person who’s on TikTok, even if you aren’t.