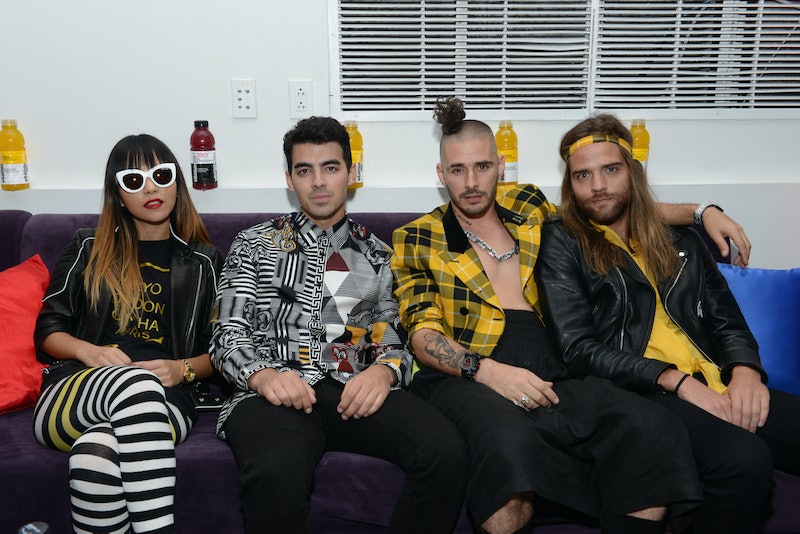 It's been a little more than one month since Joe Jonas debuted DNCE, his new musical project. Since then, the band — which also includes JinJoo Lee, Cole Whittle, and Jack Lawless — released "Cake by the Ocean," an upbeat dancey track that had me rocking out from the first listen. Jonas teased the "Cake by the Ocean" music video on his Instagram, showing a short, but informative snippet from the upcoming visual.

From what we can tell, DNCE is taking the title "Cake by the Ocean" pretty literally, as the clip shows the band performing on the beach. The parallels don't end there. The snippet also shows a line of bathing suit-clad women racing toward a giant piece of cake, only to end up throwing handfuls of it at each other. Their cheerleaders? A bunch of pom-pop-wielding men in Speedos. Juxtapose this with the band singing, "Let's lose our minds and go f---ing crazy," and you've got a pretty good idea of what to expect from the video.

From the start, it was clear DNCE has a good sense of humor. After all, Jonas told Complex that the name "Cake by the Ocean" originated from Swedish producers Mattman & Robin incorrectly naming the Sex on the Beach cocktails. This cheekiness carries over into the video. (The giant slice of cake is all the convincing I need to know that the band is all about having fun.)

Since this is the first we've seen of DNCE, the "Cake by the Ocean" video will be a strong indicator as to what we can expect from them down the line. More dance tracks? I hope so! I also hope that they keep the playfulness of this song because that's part of the reason it's so catchy.

You can watch the "Cake by the Ocean" teaser in the video above!