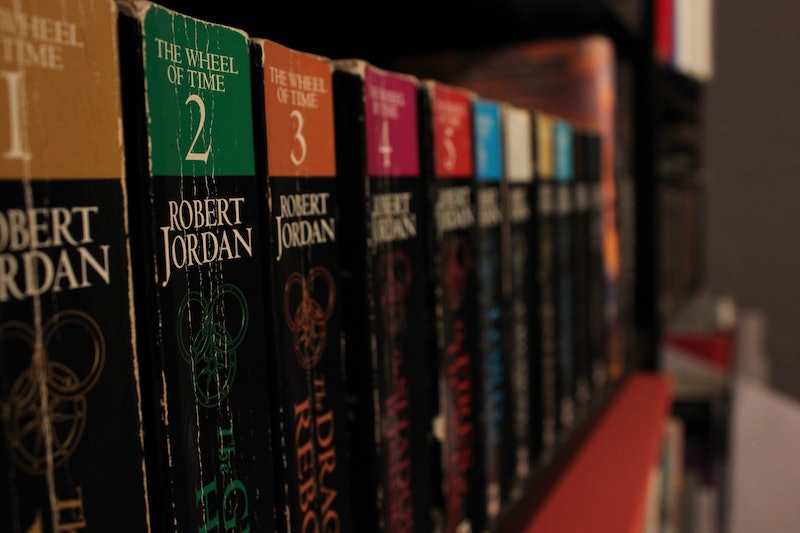 There’s nothing quite like immersing yourself in one fictional world for a while. Most of the times when you pick up a book, you get to throw yourself into the universe of that novel for a solid 300-ish pages. But I can’t be the only one who has minor (OK, sometimes major) withdrawals after she turns the very last page of a book she's been immersed in for a day or week or however long.

It’s like a rude awakening being ripped out of a world of dragons and magic or country dances and Victorian intrigue and thrust back into the world of overflowing inboxes and 6 a.m. alarm clocks. There is no cure for what I can only think to call Last Page Syndrome, but you can at least stave it off for as long as possible by immersing yourself in a book or series that goes well beyond the reasonable, generally accepted number of pages for a story.

There are some series out that there are so insanely long that you’d think they were trying to brainwash masses of book-lovers into thinking the world really IS made up of vampires or immortal psychics or whatever. But sometimes that exactly the kind of immersion you’re looking for, and when you are, these are some of the best series to turn to.

Considering the earth-shaking collective groan of disappointment that fans all over the world let out when they learned that the late Pratchett’s daughter would not be continuing the series, I doubt I have to say anything at all about these books. But for all two of you haven’t read (or been nagged by your fangirl friends about) them yet, Discworld is a hilarious and epic fantasy spread over 41 (yep, you read that right, 41!) volumes full of wizards, witches, zombies, trolls, dwarves, and pretty much any other magical creature you can think of all set in a world that is literally a giant flat disc on the backs of four giant elephants, which stand on the back of a giant turtle… seriously. It’s also seriously good.

The Wheel of Time by Robert Jordan

The Wheel of Time is a seriously imaginative series that runs for 14 books — 14 really big books — each one running somewhere around 700 pages. So, you’ll be immersed in this one for a nice long time. It’s epic fantasy in a serious way, complete with dragons and elves and a crazy big cast of characters.

The famous fictional detective is one of the longest-lived heroes of his genre and one of the most beloved. He appeared in more than 30 novels and short stories from the 1920s until Christie’s death in the 1970s. Even though Christie herself wasn’t a big fan, everybody else loved the awkward detective to death. Seriously, dude got his own obituary in the New York Times.

Nancy Drew and The Hardy Boys

If, of course, you’re looking more for the sheer quantity in the crime genre, you could always turn to the famous Nancy Drew and The Hardy Boys series. All in all, you’d have a daunting 600-plus books to keep you immersed in the kiddish mystery world of these crime-busting youngsters.

Damali and her team of paranormal badasses take on the big baddies from Philly to Africa over the course of 12 wild books, but if that isn’t enough of a vampire fix for you, Dynamite decided to continue the series and expand the world as a comic book after the 12th and final novel came out in 2009.

In Search of Lost Time by Marcel Proust

On the more “serious” literary side of things, In Search of Lost Time will certainly help you lose a great deal of time (ba dum) with its seven mammoth-sized volumes that take you deep into the life, experiences, and loves of a man whose name you never learn in all 3,000 pages.

Dragonriders of Pern by Anne McCaffrey

You just can’t go wrong with a series where the heroic warriors get to ride dragons. It’s even better when that series lasts for over 20 volumes, plus some short stories. 20 volumes of dragonriding! Yes, please.

Lone Wolf and Cub by Kazuo Koike and Goseki Kojima

Sure, a great deal of the page space in this hefty manga tomes is taken up with images, but the art is so pretty you’ll want to take your time on each page. So, the 28 volumes of this beautiful series will probably take you longer than you think, and the graphics only help to immerse you in the life of the lone samurai assassin and his son on a mission for vengeance in ancient Japan.

Time travel and romance. Who could ask for more? Well, with eight beefy volumes and more on the way apparently you can ask for much more. On top of the eight Outlander books already out there, there’s also a spin-off series based on one of the better loved characters Lord John. And if that still isn’t enough for you, you can always dive into the several side-stories based on the series. Helpfully, Gabaldon has put everything in a sort of chronological order on her website.

Not exactly a series, though it might as well have been. Clarissa is one of the longest English-language novels in history. Split into three volumes, it falls somewhere in the range of 90,000 to 100,000 or more pages depending on the edition. So, if you’re looking for a long-term reading commitment...