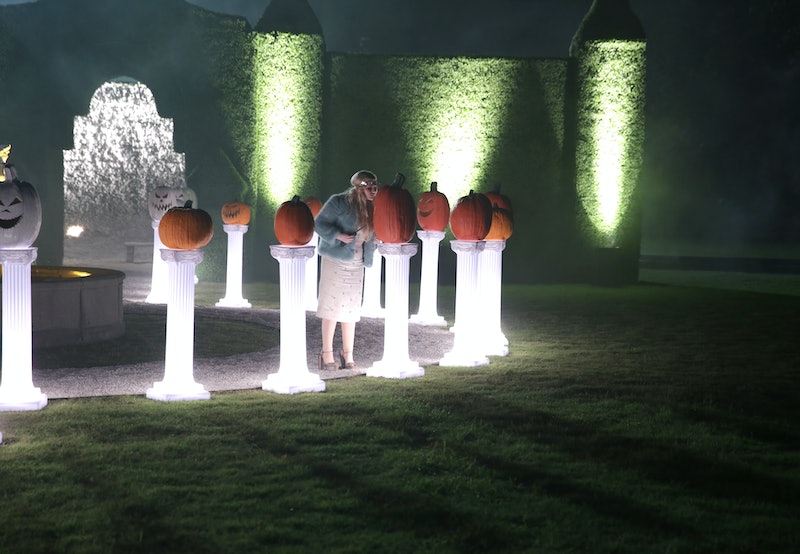 It's been clear since the series premiere that Ryan Murphy plans to reference pop culture as often as possible on his latest series, so it was perfectly fitting that references to classic horror movies abounded in Scream Queens ' first Halloween episode. The Oct. 13 episode, "Pumpkin Patch," started out as a typical day in the Kappa House — with the Chanels arguing over who gets to dress up as which widowed First Lady for Halloween (uh, I mean Chanel-O-Ween) and Chanel berating Chanel #5 for not being able to resurrect a deceased member of Led Zeppelin for her party. Oh, and her party naturally would feature an amazing replica of the maze from The Shining — because that's not a creepy idea at all when there's a serial killer on the loose.

Dean Munsch declared Halloween to be cancelled (sacrilege!), but that didn't stop Chanel from ordering Chanel #5 to finish setting up her maze. Because, guys — Halloween parties must go on at all costs. Chanel #5 brought along Roger and Dodger, and the maze ended up being an even better replica of The Shining than Chanel could have ever hoped for... mainly because Dodger got slaughtered by the Red Devil amid the snowy creepiness.

Chanel #5 deserves props for realizing that they should run backwards so the Red Devil couldn't trace their footprints (also, it was really funny to watch). But, the bros naturally blew it by shouting out their stealthy plan loudly enough for the Red Devil to hear. Rest In Peace, Dodger. And, how did Chanel feel about all this? "No one got to see how awesome my maze was," she lamented. Yes, it was a slightly heartless thing to say — but, in her defense, the maze was pretty amazing.

The Shining wasn't the only horror classic to get a major shout-out — we got an up close and personal view of the Red Devil's lair and he clearly got some interior decorating inspiration from Silence of the Lambs. Everything from the decor to the totally creepy lighting looked hilariously identical to the film's lair. And, because Murphy would never stop there, we got an epic shot of the Red Devil holding a dog as he looked down the hole at his captive, Zayday. It was a perfect nod to Buffalo Bill and his dog, Precious. I really wish we could have seen the Red Devil conversing with his pup the way Buffalo Bill did, but alas — the voice would have given away his identity.

Luckily for us, Zayday fared far better than most horror movie characters. She proved once again that she is one Kappa Sister you do not want to mess with:

If Scream Queens was able to pack all of those references — along with a quick Orange Is The New Black nod — into an episode that also seriously furthered the Red Devil mystery, I can't wait to see what it does next.

And for more Scream Queens, check out star Abigail Breslin in this Pumpkin Spice overload PSA: