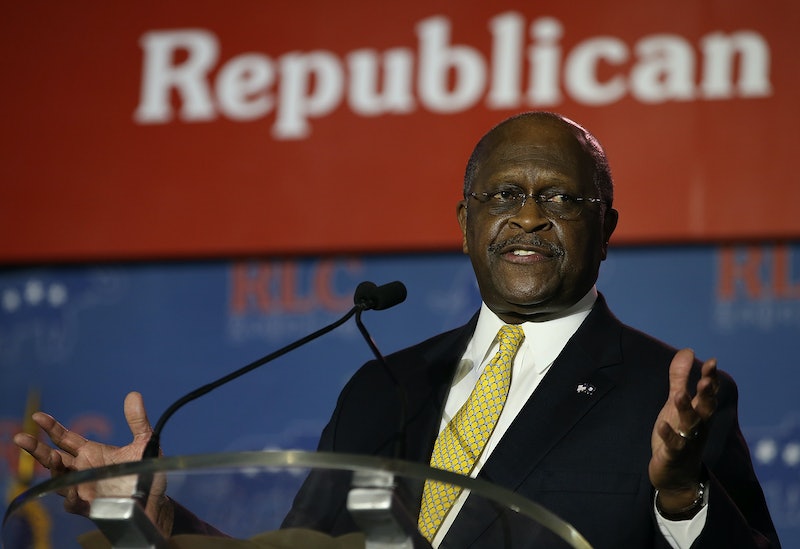 Ah, yes, because there's nothing like a washed up politician to let us know what we need. They usually do know best, after all! Cain, if you'll remember, shot himself in the foot repeatedly during the 2012 election after it came out that he'd had a years long affair. But no matter! If you can't succeed yourself, you should probably just weigh in on things that literally no one was asking your opinion on.

Now, let's see what delightful insight Cain has for us about a female president. Maybe he'll show loyalty to his party and pit Carly Fiorina and Hillary Clinton against each other! Maybe he'll talk about how it's absurd that we haven't had a female president yet! All I know is that I, personally, can't wait to hear what this man — who I have absolutely not thought about since he dropped out of the race four years ago — has to say about female presidential candidates.

Like everyone's least favorite drunk uncle, Cain popped out of the woodwork to remind us that, yes, he's still awful. Although I hesitate to speak with any type of authority about what the hell he intended to say, I think I get this gist — a female president can't be a leader. Wow! I hate to tell you this, Herm, but since you were effectively chased out of the Republican Party, they've tried to stop treating women like animals.

In fact, they have a woman running for president, too.

It's frustrating to hear someone who failed so spectacularly in his presidential bid feel as if he's still entitled enough to criticize Clinton. Especially since, you know, he flamed out long before the actual election.

But, if she could muster any ounce of her being to care about what ol' Herman Cain has to say, Clinton shouldn't be too offended. Cain was offering up incoherent criticisms of the debate all night.

So don't feel too bad, everybody. Herman Cain has enough exclamation points and scattered thoughts to share with everyone. Not just women.