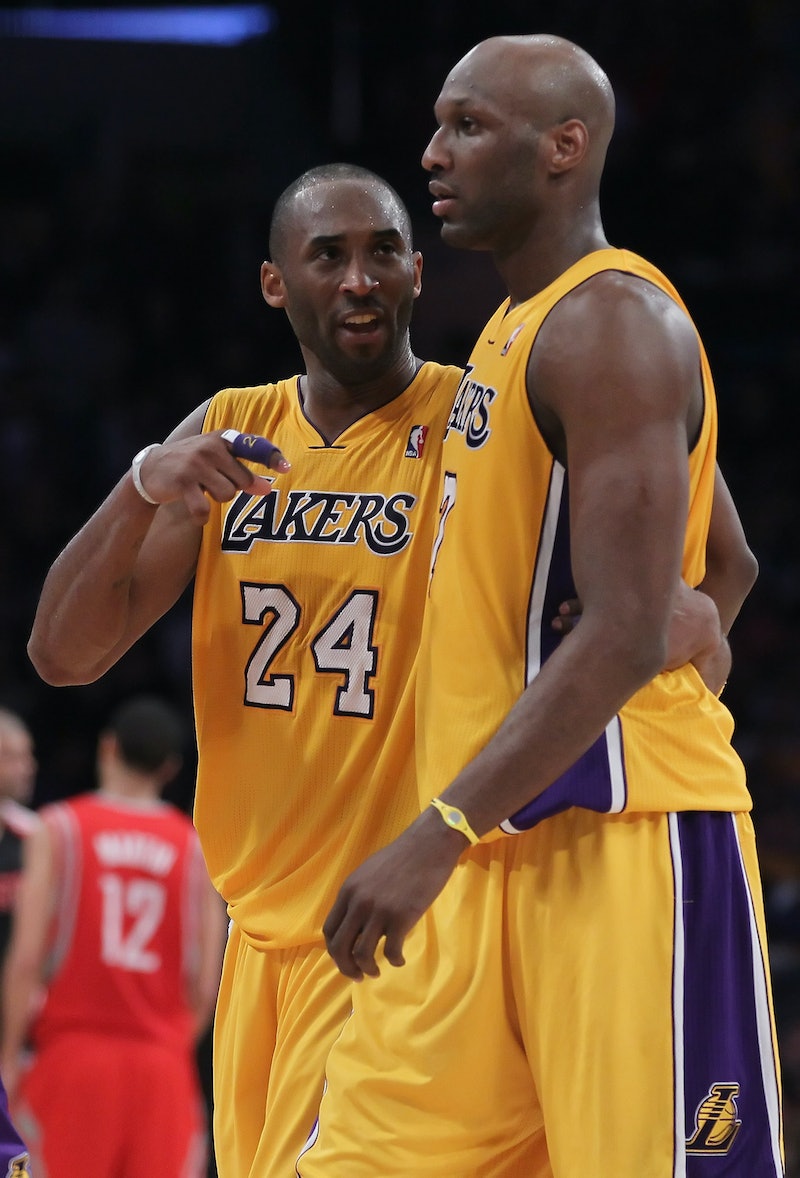 Lamar Odom can now count on one more person to be by his side in his time of need. As reported earlier, the former NBA basketball player Odom was found unconscious in a Nevada brothel on Oct. 13, and he has been hospitalized as a result. Following the news of Odom's condition, Odom's publicist released a statement to Us Weekly stating that family and friends are "extremely concerned" for him — and it seems that one friend among them is a former teammate of his. According to TMZ, Kobe Bryant was seen visiting Lamar Odom in the hospital.

The New York Post reports that Bryant left a Lakers preseason game on the day Odom was found unconscious and did not return to the basketball court. The official reason for Bryant leaving at the time was that he had suffered an injury, according to the Post — but on Oct. 14, the Los Angeles Daily News reported that Bryant actually left the game to be by his former fellow player's side. It is an amazing show of solidarity on Bryant's part that he would leave at a moment's notice to be with his friend — but Bryant's support is not entirely surprising, either. After all, Odom played for the Lakers from 2004 to 2011, meaning that he was teammates with Bryant for seven years. It seems that the two would have had ample time to get to develop a friendship.

Odom played a key role in 2009 and 2010 championships for the Lakers, according to the LA Daily News , and he even won NBA's Sixth Man Of The Year honor for his 2010-2011 season. Those are some pretty big moments for a team to achieve, so the two men likely have many happy memories from when they played together. Since they played together for so long, they probably had lots of opportunities to get to know each other off the court as well.

Though it is not shocking that Bryant is one of the many people rallying around Odom to help him get better, it is still a positive thing to see some good energy from someone that he knows well in a desperate and uncertain time.

In light of reports about Odom's condition, Odom's publicist released a statement to Us Weekly, stating:

Family and friends are extremely concerned for Lamar... Please don't listen to the false information being circulated unofficially. Please respect the family's privacy during this difficult time.

Additionally, following reports of Odom's condition, a press release was circulated by the Nye County Sheriff's Office confirming reports that Odom had been hospitalized.

Bustle has reached out for comment, but has not yet heard back.

More like this
Lewis Hamilton Turned Down A Role In 'Top Gun: Maverick' For This Surprising Reason
By Darshita Goyal
Harper Teasing David Beckham’s Dad Dancing Is Beyond Adorable
By Frances Stewart
The Spice Girls & Adele Lead Girl Power Celebrations For Lionesses’ Euros Win
By Sophie McEvoy
13 Photos Of Princess Charlotte Loving The Commonwealth Games
By Sam Rogers
Get Even More From Bustle — Sign Up For The Newsletter